Tonight’s varsity football game between two Eagles squads, from Mission and Eagle Pass High Schools, will be played at Sharyland High School’s stadium because of continuing delays in the completion of Tom Landry Hall of Fame Stadium at Mission High School.

Michael C. Montalvo, manager of Holchemont Ltd., the McAllen-based construction company building the $8 million, nearly 9,000-seat stadium, said Wednesday that with the exception of the elevator that goes to the 70 foot high press box, the bulk of the stadium should be completed by next week. 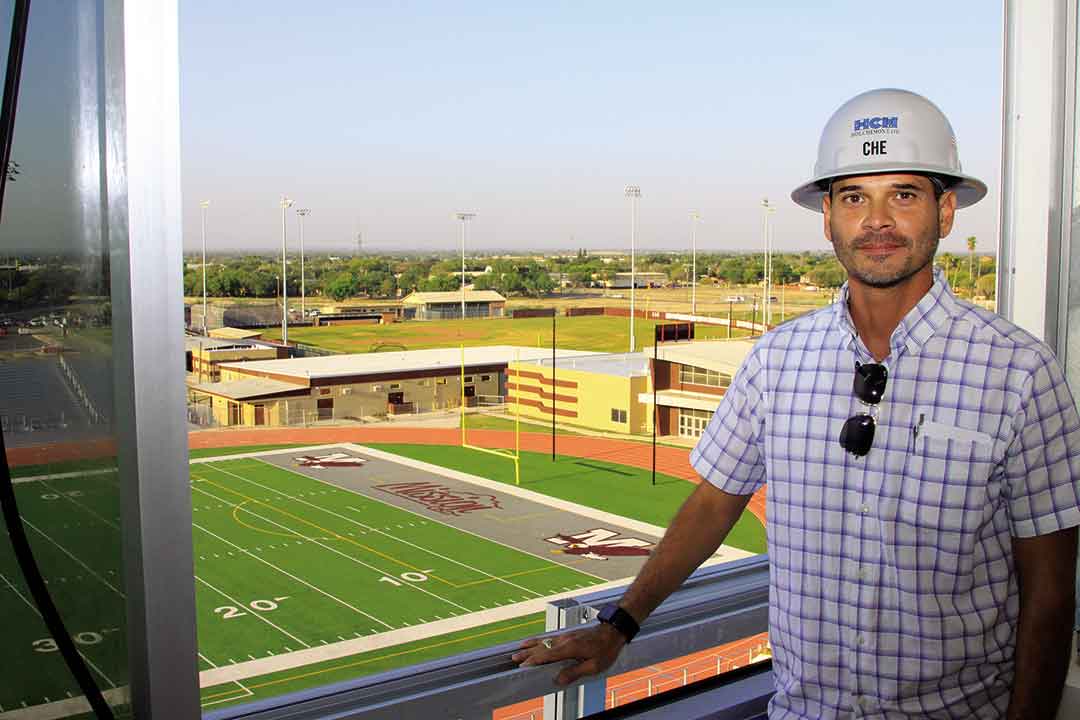 He said workers were expected to complete installing the plywood-sized glass windows by today. He said that would allow activation of the press box’s air conditioning system that will need to run 48 hours until the press box is dehumidified to the point workers can begin installing the vinyl laminated flooring tiles. Final installation of the glazing also delayed installation of the exterior press box sheathing, a portion of which had been installed on the west side of the press box last week because it has no windows, just an access door to the VIP room.

Montalvo said Wednesday he had received conflicting information on how long it will take for final completion of the elevator. He said union officials responsible for the elevator’s installation told him installation would take about 10 days but that workers on site estimated the job would take about 15 days to complete. The elevator’s parts were delivered Sept. 12 but Montalvo said workers only worked Wednesday and part of Thursday last week before informing him they would not be returning to the job site until Monday, Sept. 18 because they had already worked the majority of their 40 hour work week at another installation site before starting on the Tom Landry site.

According to background information created for the Mission CISD board of trustees by Ricardo Rivera, assistant superintendent for operations, when he originally bid on the project Montalvo estimated it would take 235 days to complete the stadium that would have made the original completion date Sept. 24. Two competing bidders said they could do the job in 180 days but that the custom press box the school district wanted would cost considerably extra and take more time. Holchemont’s bid included the custom press box that is more than double the size of the original 320 square foot, 30-year-old press box.

Holchemont was awarded the construction contract on Jan. 25 after Montalvo agreed during negotiations with district officials to complete the project by Aug. 21, 2017, which would have made the stadium ready by the first football game of the year on Sept. 1. However, Rivera’s background reports include numerous reasons the project has been delayed including rain days, work change requests and days the company was asked not to work because of student testing that moved the current contractual completion date to Sept. 12. Montalvo noted all the work change requests were at the behest of the school district.Montalvo said he is requesting additional delay days that would push back the contractual completion date until at least today. But he said that request would not be made until the end of the month when he submits his monthly billing to the school district. By contract Holchemont could be assessed a $1,500 penalty for each day the stadium is not completed by the contractual completion date.

Montalvo said he hopes to meet with Mission’s fire marshal and planning director to discuss seeking an occupancy waiver to permit the football teams and bands to practice on the football field, which has remained in pristine condition since the project’s start on Feb. 2. Montalvo said he also plans to inquire if it would be possible to receive a waiver to use the press box without the elevator because it is accessible from the bleacher stairs. Contacted Wednesday, Jaime Acevedo, the city’s planning director, said even if the city granted a waiver Montalvo would still need permission from the Texas Department of Licensing and Regulations which will have ultimate certification authority for the elevator. If the waiver is not approved occupancy of the stadium probably will not occur until the first or second week of October, Montalvo estimated.

In the meantime the district’s athletic director, Leticia “Lety” Ibarra, has made contingency arrangements for the teams scheduled to play at Mission High School to play elsewhere.

MCISD board members and superintendent Dr. Ricardo López have publicly taken the delays in stride saying in the long run no one will remember the stadium’s completion was delayed and that the city will have a football facility for which the community can be proud of.