Three years ago Mission contractor, welder and businessman, Amador Requeñez, was approached by developers and asked if he wanted to be a part of building the new Edinburg home of the Rio Grande Valley Vipers, farm team to the NBA’s Houston Rockets. As a steel contractor who has built schools, hospitals and high school stadiums, among other types of structures, Requeñez was intrigued as plans went from a proposed 4,000-seat arena to the final plans for a facility that seats about 9,000 for basketball and more for concerts.

“My family didn’t want me to take this job,” Requeñez, 74, recalled earlier this week sitting in the family room of his Mission home. “But I wanted it on my resume because I’m sure that any steel fabricator would want to have that. In fact, it’s the biggest job here in the whole Valley.” 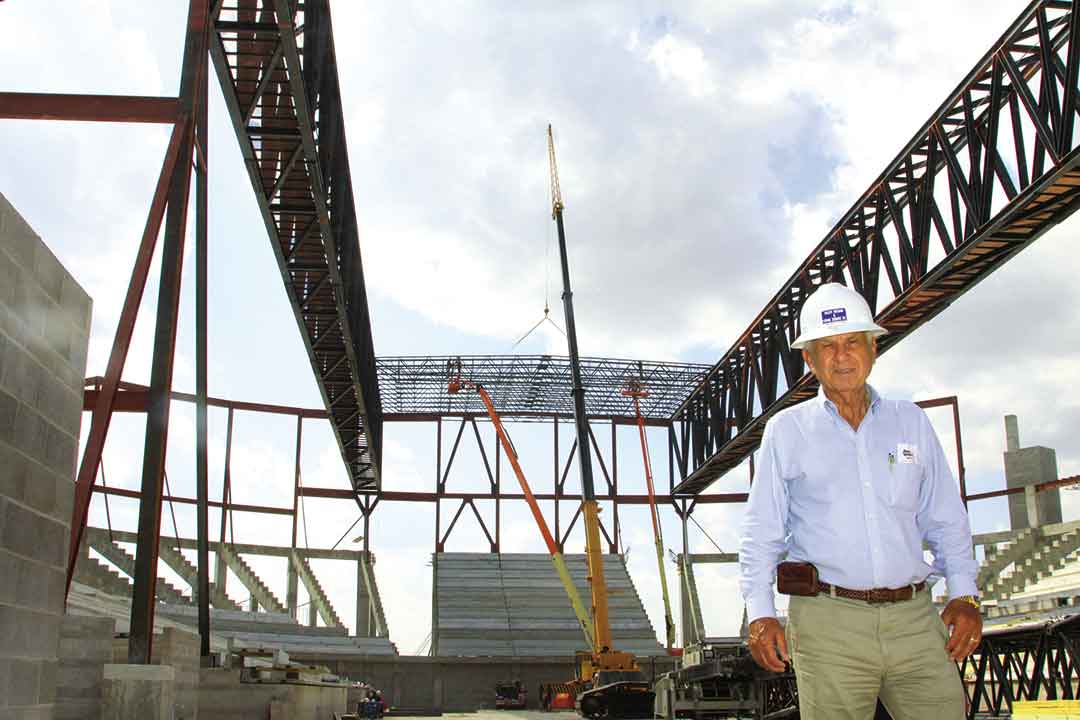 As questions remained about the facility’s design, Requeñez said he was attending a Dallas Cowboys home game two years ago when he had an epiphany, use the same truss design as the Cowboys’ $1.5 billion AT&T Stadium. He pitched the idea to the project’s structural engineer, Simon Solorio. Then, the woman that  developer Alonzo Cantú chose to design the arena, architect Martha L. “Marti” Hinojosa, told Requeñez if he could build it she would incorporate the giant trusses into her design.

“We don’t tell builders how to construct things, we just give them the designs and specifications,” Hinojosa said Tuesday in her McAllen office. “How they build it is up to them.”

Since January when the ‘go ahead’ for construction was given, crews from Requenez’s company, Valley Welding Service, constructed on site the two main trusses that support the arena’s roof. Each are 307 feet long, the length of a football field, 9 feet wide, 27 feet tall and weighs approximately 400 tons. Requeñez had to rent a pair of cranes large enough to raise the trusses 90 feet onto their supports. Also rented were a pair of 32-wheeled, self-propelled transporters built in Italy to move the trusses from their construction site outside the stadium to their position inside the stadium just below the cross beams on which they were eventually hoisted. After months of anticipation, installation of the two trusses was completed Sept. 12, said Requeñez’s oldest daughter, Cynthia Requeñez, who assisted her father on the project.

For his part, Requeñez said the structural steel component for which he is responsible should be completed in December. Hinojosa said the rest of the arena is slated for completion sometime in the first quarter of 2018. Once completed, the project will be the crowning achievement of his career, thus far, Requeñez said.

“Basically this is the largest structure south of San Antonio,” said Requeñez’s wife, Alicia, who nearly 50 years ago cashed in her retirement account after resigning from her job as a nurse with the La Joya Independent School District so her husband could purchase a work truck and equipment needed to start his own welding business. Mrs. Requeñez went on to study at the former Pan American University where she earned a degree as a registered nurse.

Requeñez said he knew as a child he wanted to own his own company saying he found his calling in welding when he was taught the trade while participating in Future Farmers of America.

“I used to tell my friends in fifth, sixth, seventh grade, ‘I’m going to own my own business when I grow up’,” Requeñez said.

After graduating from La Joya High School he worked as a welder and then subcontractor for various companies in the Valley. While working for others in the early 1970s he took one semester class in architecture at Pan American University to learn to read blueprints and construction plans.

“That’s all the college that I had,” Requeñez said.

While working for others, Requeñez began moonlighting on his own as a welder, his first contract being a pair of bicycle racks he built from scratch for Bryan Elementary School. Not long after, he struck out on his own with his business, Valley Welding Service.

Soon after, his business took off. Since then his clients have included Doctor’s Hospital at Renaissance, Harlingen and Brownsville Medical Centers and six schools in Brownsville, among many others.

During his career he and Alicia raised three daughters. Besides Cynthia, there is his second child, Linda, a federal prosecutor, and his youngest, Lisa, who six weeks ago gave birth to Requeñez’ first grandchild.

At the moment his staff, comprised of a core group of 48 with 14 additional subcontractors, is focused on the arena. But Requeñez said he continues to receive queries from potential clients and plans to continue working.

Hinojosa, who has worked closely with Requeñez on the arena, described him as “very professional” and “a class act.”

Though Requeñez just turned 74 this week, Daughter Cynthia, who has worked as his personal assistant on the arena project, said she can barely keep up with her father. And nearing the completion of his greatest achievement, Requeñez said he has no interest in retiring.

“I have no plans at the moment,” Requeñez said of retirement. “I love the opportunity to do what I love.”