Palmview head football coach Mage Requenez has built the Lobos into a consistent 30-6A contender, qualifying for the postseason each season since he took over as head coach three years ago.

With district play set to kick off tonight, Requenez and the new look Lobos hope to continue to build on the foundation and success Palmview has seen in recent years. 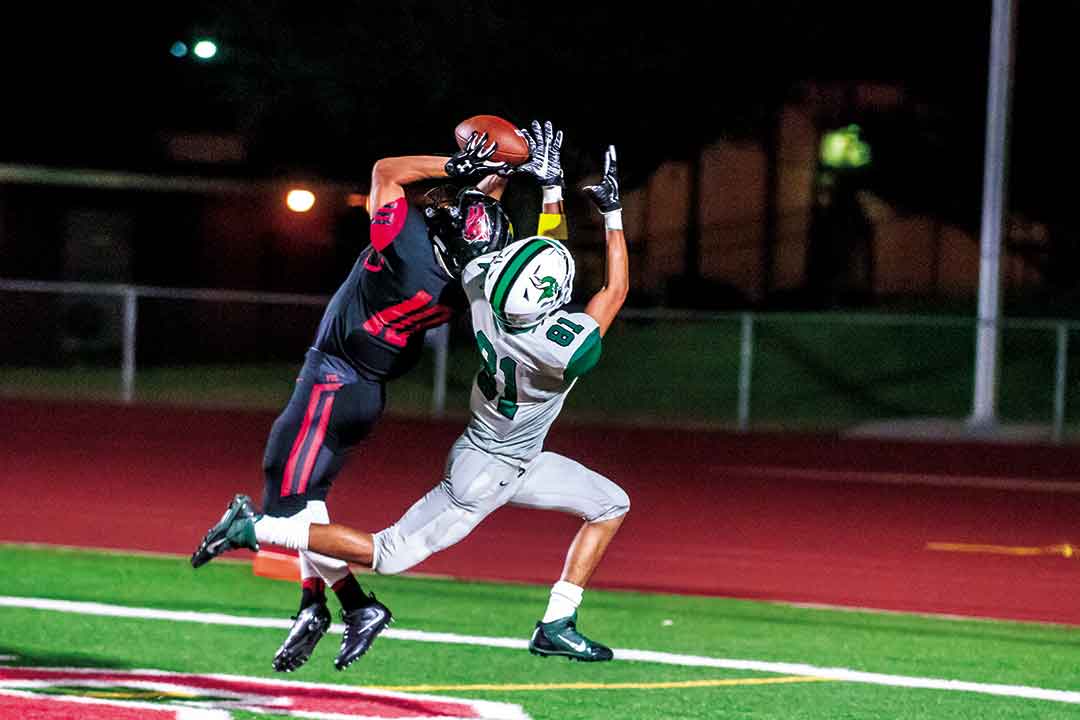 “I just keep reminding them of what earlier teams have done here at Palmview, what foundations they have set, and if they want to continue that tradition they have to step up to the plate,&rdquo; Requenez said. “They have to fill in pieces from last year and so far we&rsquo;re doing that. We just have to see how district plays out.&rdquo;

Fresh off a big win in last Friday&rsquo;s contest against Brownsville Pace, the Lobos are now 2-2 after non-district action, ending a two-game skid. Palmview found the ground game they&rsquo;ve been seeking in the team&rsquo;s 27-14 home win over Pace.

The Lobos rushed for 400 yards as a team against Pace, led by David Flores&rsquo; 102, Jalen Ybarra&rsquo;s 90 and Jacob Pina&rsquo;s 76. Flores, the team&rsquo;s junior quarterback, scored twice on the ground and also threw for 86 yards and a touchdown pass to senior receiver Eric Vasquez.

Palmview&rsquo;s defense held their own, only surrendering 230 yards to the Vikings, who were kept off the scoreboard in the second half after touchdowns in the first and second quarters.

Requenez said he liked the way his team fought until the final whistle and performed under pressure.

“The thing that I saw from my kids is that they kept on fighting until the end of the quarters,&rdquo; he said. “I was very impressed with the way they handled themselves under pressure. One thing that we do still have to work on is holding onto the ball and controlling the clock. I think if we can do those two things throughout the whole year, we&rsquo;ll be a tough team to contend with.&rdquo;

Senior cornerback Jesus Herrera said he felt the team picked things up against Pace and is looking forward to making sure Palmview is in the playoffs at the end of the regular season.

“I feel like against Pace, we came together strong,&rdquo; Herrera said. “Now, we just have to win games and make sure we continue our tradition of going to the playoffs and doing the best we can.&rdquo;

Now, Palmview will face its first district test in a home bout against reigning 30-6A champion and this year&rsquo;s favorite, the McAllen Memorial Mustangs (2-2).

The Mustangs have been battle tested early with a non-district schedule against four playoff teams from a year ago. Memorial enters the game against the Lobos with a two-game skid of their own, coming off a 31-7 loss to San Benito and a 24-7 loss to Los Fresnos last week.

“They&rsquo;re one of the better teams in the Valley; they&rsquo;ve always had a very successful program,&rdquo; Requenez said. “We just want to make sure that we play with them; that we focus on our emphasis, and if we do that we&rsquo;ll have a chance at winning the ballgame.&rdquo;

Memorial brings a dangerous ground attack of their own, spearheaded by sophomore running back Campbell Speights. Through four games, Speights has 394 rushing yards and three touchdowns, while junior quarterback Sean Skaugen has run for 252 yards of his own.

Herrera respects Speights&rsquo; game but has confidence the Palmview defense can contain him and turn him into an east-west runner as opposed to his north-south style.

“Campbell can be a great runner when everything goes for him, but I feel like our defense will make him run side to side and we&rsquo;ll be able to stop him,&rdquo; Herrera said. “We&rsquo;re excited to prove to [the district] that we&rsquo;re ready, we&rsquo;re for real, we&rsquo;re ready to play.&rdquo;

Kickoff between the Lobos and the Mustangs is set for 7:30 p.m. tonight at La Joya Pack Stadium.