“I don’t know if she is the youngest person to ever win the Ladies Division of the open but she is in the past 15 years that I’ve been with the association,” said Stephanie Haga, an assistant to NSSA Director Gary Burley. Haga said the association was researching records to determine if Saenz is the youngest to win the Ladies Division of the open, in which all age brackets over the age of 13 participate. 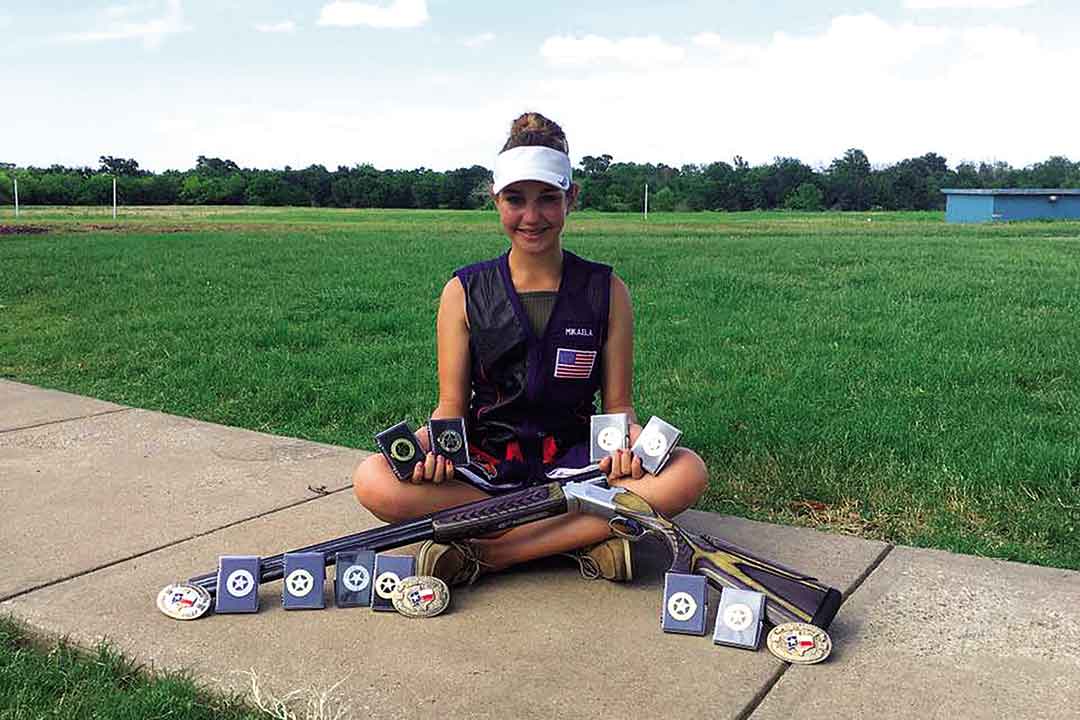 Founded in 1928 and headquartered in San Antonio, NSSA is a non-profit organization owned and operated by its members, according to its website. With approximately 15,000 members and 700 affiliated member clubs, it is the largest organization in the world dedicated solely to the sport of skeet shooting.    Saenz’s parents are both Mission natives. Her father, Benjamin, graduated from Mission High School and her mother, DeAnna, is a Sharyland High grad. Her grandmother, Julie Saenz is a retired Mission and La Joya teacher and her grandfather, Jerry Saenz, owns a State Farm insurance agency in Mission.

Though describing his daughter as “a natural” when it comes to shooting, Benjamin Saenz, himself a skeet shooting coach for two 4-H teams in Katy, Texas, where the family now resides, takes some credit for his daughter’s success.

“She was 4 years old when she shot her first deer sitting on my lap looking through a scope while I held the gun and she got her first White-tailed deer,” Saenz said in a phone interview Tuesday. Saenz said his daughter hit her target from 107 yards with a Browning .270-caliber bolt-action rifle. By the time she was 8 Mikaela was accompanying her father to the Mission Skeet and Trap Club where she caught the shooting bug. She honed her skills as a member of a 4-H shooting club and is  currently a member of the Katy High School Future Farmers of America shooting team.

Each meet starts off with what is known as a doubles competition where clay pigeons are launched simultaneously crossing in front of the shooter from opposite sides of the field, one launched from an elevated platform on the left and another from a ground-level platform on the right. Each clay pigeon is worth one point and each round consists of 100 targets, or birds, as Benjamin Saenz and other aficionados call the clay pigeons. In a perfect round, a shooter would score 100 for 100, something Mikaela did in three of her four rounds of non-doubles competition at the U.S. Open.

In the U.S. Open competition that took place between Sept. 7-10 at the Northbrook Sports Club in Hainesville, Ill, Mikaela hit 392 out of 400 targets in the non-doubles portion of the competition, her father said.

Though she won the U.S. Open it does not mean Saenz is the best woman skeet shooter in the nation, said Haga, who explained that like other professional sports like NASCAR or tennis, the NSSA awards points to participants depending on where they place in competitions and in how many competitions they participate. Haga said the number one lady shooter in the nation is Becky McCumber, 61, of Naples, Fla. Haga said Saenz is currently rated number 17 in the nation with just under 1,100 points compared to McCumber’s nearly 2,900 points.

The U.S. Open was not the only meet in which Mikaela has competed outside of Texas. Last year she won the NSSA Junior World Championship in Savannah, Ga., in the sub-junior category, which is age 13 and under. And she competed in last year’s NSSA U.S. Open in Stockton, Calif. This year she shot in the NSSA Junior World Championship held in St. Joe, Indiana, and in the NSSA U. S. Open near Chicago.

Including practice shots, competitors can fire up to 650 rounds in a typical competition, Benjamin Saenz said. But despite the number of rounds fired Mikaela said she doesn’t suffer from shoulder bruising that might interfere with her ability to compete.

“I’ve built up my body over the past seven years,” Mikaela said. “So if you put the gun in the right place you don’t have any problems,” adding she competed once with a broken finger that didn’t affect he ability to shoot.

Mikaela’s grandmother, Julie Saenz, said she has been impressed with the people involved in the sport because of the discipline the sport instills as well as the camaraderie and respect amongst competitors and coaches.

“Before thinking that guns should be outlawed, people need to look at what youth shooting sports actually do for the community,” Julie Saenz said. “Mikaela learned safety, good citizenship, leadership, responsibility and how to connect with others.”

As an example of her granddaughter’s good citizenship Julie Saenz noted that with the U.S. Open just days away, Hurricane Harvey flooded the shooting center where Mikaela practiced. Instead of worrying, Saenz said her granddaughter volunteered at a local relief center sorting donated necessities for distribution to flood victims.

Mikaela’s father said he was not surprised his daughter was still able to win the Lady’s Division of the open without a lot of practice.

“There is such a thing as being a natural shooter and I think she has that,” Benjamin Saenz said of his daughter. “Because she can go weeks and weeks without practicing and shoot a straight hundred, so she’s pretty awesome.”