With the 0-1 Juarez-Lincoln Huskies going up against the 0-1 Palmview Lobos tonight, and with the 1-0 Mission Eagles facing off against the 1-0 McAllen Memorial Mustangs tonight as well, something’s gotta give.

Will it be the Lobos or the Huskies who earn their first district win? Will it be the Eagles or the Mustangs who remain undefeated in District 30-6A play? Both of these questions will be answered tonight; the former at La Joya ISD Stadium and the latter at McAllen’s Veterans Memorial Stadium. 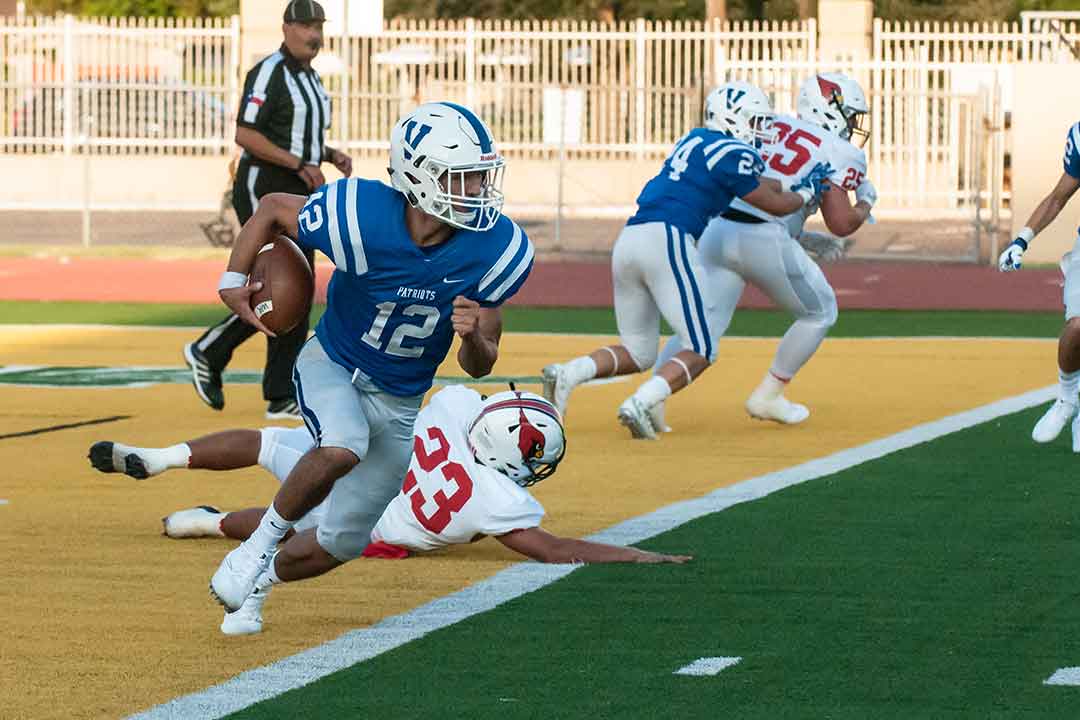 With the La Joya Coyotes (3-2, 0-1) having played the McAllen High Bulldogs (1-3, 0-0) at home last night, the six remaining football teams from the Mission, Sharyland and La Joya school districts will all be taking to gridirons across the Upper Valley tonight. So, let’s take a look at those four games to see who they’re each playing and where.

Veterans Memorial Patriots at Pioneer Diamondbacks
Veterans Memorial Patriots head football coach David Gilpin might want to consider changing the name of his football team from the Patriots to the Nomads. That’s because as a result of delays in the renovations at Tom Landry Stadium, the Patriots, who were originally scheduled to play four of their first five games this season at home, have been forced to play those four games in four different stadiums. Even so, the Patriots have made the best of their situation by putting together a perfect 3-0 District 31-5A record and are undefeated at 5-0 overall.

Tonight the Patriots will be playing an away game in a stadium that’s closer to Veterans Memorial High School than any of the stadiums they’ve played their “home” games in so far, as they travel to Sharyland ISD’s Richard Thompson Stadium to play the 1-1 Pioneer Diamondbacks (2-2 overall). For a more in-depth look at this game, see our Game of the Week preview here.

Palmview Lobos at Juarez-Lincoln Huskies
With the Palmview Lobos and the Juarez-Lincoln Huskies having both opened their district schedules with losses last week, this cross-town match-up between two of last year’s four 30-6A playoff teams is as much of a must-win as any Week Six game can be. Whoever drops to 0-2 in the district, will pretty much have to win at least three of their remaining four games to have any chance of qualifying for the playoffs. And that is something that even the top teams will find difficult to do.

Mission Eagles at McAllen Memorial Mustangs
Last year, the McAllen Memorial Mustangs barely broke a sweat against the Mission Eagles as they defeated them in a lopsided 45-6 victory. That was last year. Going into that game the Eagles were 1-4 overall and 0-1 in District 30-6A play. So far this year, the Eagles are 3-2 overall and 1-0 in district play.

While the Eagles are having a better year under second-year head coach Koy Detmer, they will have their work cut out for them tonight as they go up against the defending district champions that just handed Palmview a 49-7 loss. But the fact that they’re coming off back-to-back wins against Eagle Pass Winn (21-14) and the La Joya Coyotes (20-15), could give the Eagles the boost of confidence they need to march into Veterans Memorial Stadium tonight and give the Mustangs a run for their money.

Sharyland Rattlers at Roma Gladiators
After stumbling out of the starter blocks this season with a 62-0 Week One loss at the hands of the Weslaco East Wildcats, the Sharyland Rattlers have gotten their season back on track with consecutive wins over Edinburg North (24-20), Valley View (48-6) and Laredo Martin (45-28).

Tonight the Rattlers will be traveling to Roma as they look to extend their win streak to four-in-a-row when they play the 0-3 Gladiators (0-5 overall).

Against Martin last week, Sharyland junior quarterback Edgar Longoria completed 15 of 23 pass attempts for 216 yards and three touchdowns and ran the ball seven times for 39 yards and another touchdown. Senior halfback Blake Klein also carried the ball seven times for the Rattlers as he picked up 101 yards and scored one touchdown. Top receivers for the Rattlers last week were junior Ruben Davila (7/57 1-TD), junior Gabriel Tamez (4/57 1-TD) and Klein (3/41).