A team playing with one heartbeat is more powerful than any individual player, and the Veterans Memorial Patriots (6-0, 4-0) proved that last night in the team’s 61-38 statement win over last year’s co-district champion Pioneer Diamondbacks (2-3, 2-2).

The Patriots were tested early in the game, facing a 10-7 deficit after Pioneer’s Jacob Rosales connected with receiver Andrew Moss for a six-yard touchdown. That’s when Landry Gilpin and the Mission Veterans offense turned it on and never looked back. 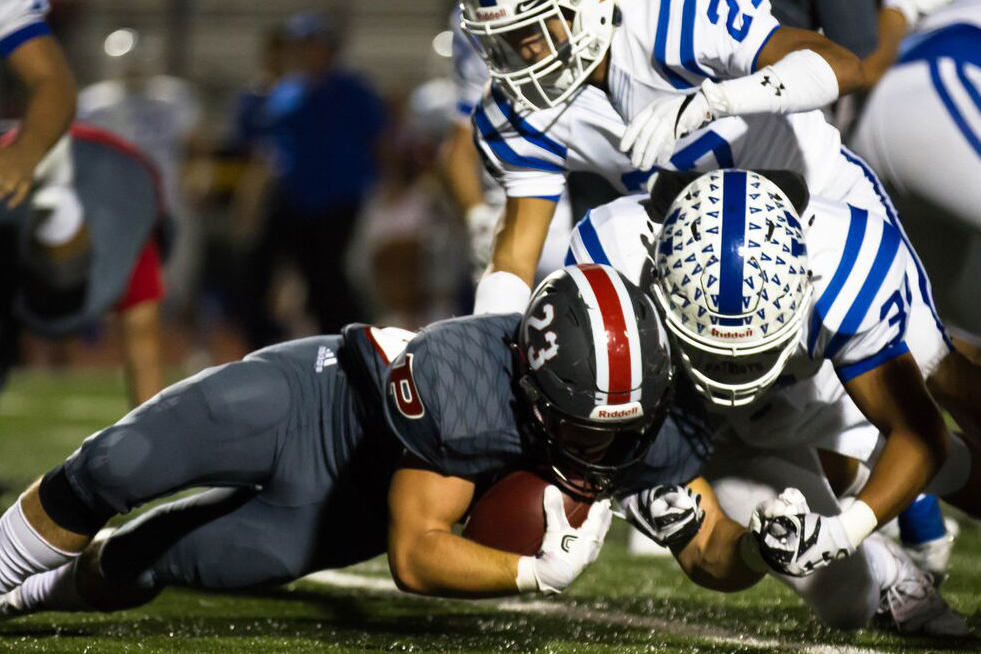 Mission Veterans proceeded to score two consecutive touchdowns before the halftime buzzer, a 4-yard Gilpin run and a 31-yard connection to receiver Mikey Garcia with just :17 seconds left in the second quarter. The close to the first half gave the Patriots the confidence they needed to come out and continue rolling in the second half.

The Patriots took exception to a sign held by a fan at Richard Thompson Stadium that read “Pioneer versus Landry.” The Mission Veterans offense and defense showed they are much more as the team remained unbeaten in 2017 by unleashing a second half scoring barrage on the Diamondbacks.

The Patriot defense was focused coming into the game against Pioneer and held their own. Pioneer’s 28 second half points came when the game was already in hand for the Patriots. Defensive back Giovanni Grimaldo said the Patriots were looking forward to this matchup.

“We had this game circled since last year,” Grimaldo said. “It was very important for us to win because we know we lost this game last year, we know we had to get this win to get to 6-0.”

Veterans Memorial Head Coach David Gilpin said the team felt disrespected in some areas and came out with the intention of showing they were not happy about it.

“I take great pride in our program, I take great pride in the fact that we play with one heartbeat,” Coach Gilpin said. “Looking at the sign that was on the board when we walked out here that said “Pioneer Football versus Landry.” We took a little bit of that to heart. Our kids came out to play with a chip on their shoulder and we’ve played physical football all year long and we came out to do so tonight. They slowed us down a little bit in the first half but once we got things cranking, we did what we do. I’m real proud of our group and real proud of our coaching staff.”

The win keeps the Patriots perfect as they move to 6-0 on the year and 4-0 in district while the loss drops the Diamondbacks to 2-3 overall and 1-2 in district.