Hidalgo County Judge Ramon Garcia was joined by other judges last week to convince the public the time is now for a new $150 million county courthouse and that construction should begin as soon as possible.

“I can assure you the way we structured [payment] there will be no need for any new tax rate increase,&rdquo; Garcia told about 80 persons attending a Sept. 28 luncheon of the McAllen Citizen&rsquo;s League. “In fact yesterday we felt comfortable in lowering the tax rate [for the first time] in I believe 18 or 19 years.&rdquo; Garcia was referring to the Hidalgo County Commissioners Court action a day prior lowering the county&rsquo;s property tax rate from 59 cents to 58 cents per $100 of assessed property valuation. 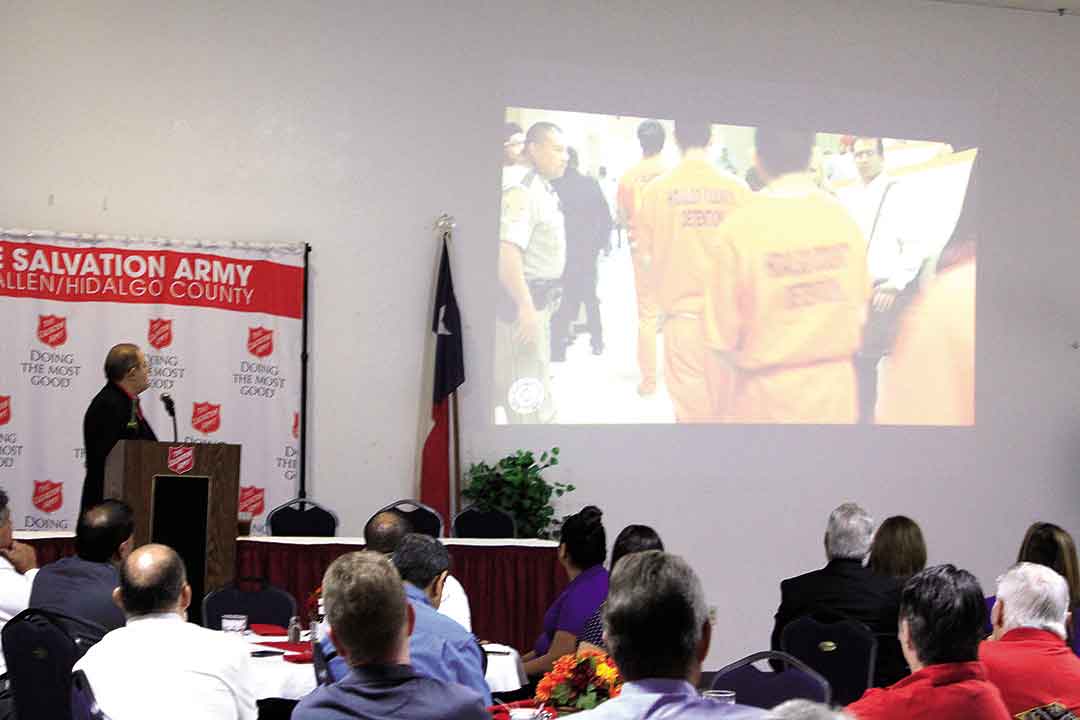 Garcia played an eight-minute county-produced video for his audience that detailed much of the courthouse history and how Hidalgo County came to need a new one. The presentation was made at a forum hosted by the McAllen Citizen&rsquo;s League held at the McAllen Salvation Army complex.

According to the video, the original 100,000-square-foot courthouse was completed in 1954 to serve a rural community of 168,000, not the more than 800,000 that populate the county today and was designed for three courtrooms with the potential to expand to five. &nbsp;The video presentation stated the 63 year-old building has outlasted the typical 40- to 50 year lifespan of a typical courthouse. Today the court complex has expanded to 111,000 square feet with 24 courtrooms, 17 housed in the main court complex, five courts in modular buildings and two more courtrooms located outside the court complex. And due to the county&rsquo;s growth the state has mandated creation of an additional district court by 2019, Garcia said. That the 430th and 449th District Courts are located miles from the main complex is an additional cost to the county in rent and security, Garcia said.

“So we need space,&rdquo; Garcia said, adding the new facility will have about 370,000 square feet on seven floors with room for growth for 10 additional courtrooms.

Also speaking at the luncheon was 398th District Court Judge Keno Vasquez, who complained there are jury rooms for only two of the five courtrooms in his section of the complex.

“So when I have a jury trial I have to borrow a jury room,&rdquo; Vasquez said.

Vasquez also noted there are no separate entrances or passageways for jail inmates meaning the inmates pass within feet of trial victims, witnesses and jurors.

“If it were your trial would you want your jury walking down that hallway,&rdquo; Vasquez asked.

“What you saw in this video happens every day,&rdquo; Garcia said of jail inmates sharing the hallways with the public. “These defendants &ndash; and we don&rsquo;t know which one is going to end up doing it &ndash; but they&rsquo;re walking within a few feet of witnesses, of victim&rsquo;s families, they&rsquo;re using the same bathrooms; a lot of things could happen and we&rsquo;ve been very fortunate that nothing has happened.&rdquo;

In the video the unattributed narrator notes the new complex will have separate entrances and passageways for jail inmates headed for court.

Judge Roy Valdez, chief justice of the 13th Texas Court of Appeals, said he has been practicing law for 35 years including in Houston and Corpus Christi and has rarely seen court security as lacking as in Hidalgo County. Because his court is in an annex, some law enforcement response times have been concerning when incidents occur between rival gangs in his court. He said it&rsquo;s time for all the courts to be under the same roof with equal access to court security.

“This is an opportunity to be as a family where you have all the judges together and you have the appropriate security, where we have the equipment and accommodations to take care of the most important business in the county,&rdquo; Valdez said.

The video also noted that over the past 63 years the elements have taken their toll on the courthouse as each year the cost of maintaining the aging building increases. Also, the fire alarm is faulty and fire suppression system is antiquated. The building also contains asbestos, a known carcinogen used as a fire retardant in older buildings. The building also has lead-based paint which has been linked to brain damage in children, deteriorating walls, cracked ceilings, rusty pipes and water damage. &nbsp;The video&rsquo;s narrator asserted every time it rains the clerk&rsquo;s offices experience leaks that can potentially damage records and results in mold putting storage rooms that hold thousands of county records at risk of being damaged.

What is the actual cost?
During the forum Garcia was asked why at a recent Commissioners Court hearing the price of the new courthouse was stated to be $141 million, Garcia said that is the current cost estimate. But he noted the cost has fluctuated from the $200 million architects originally estimated.

“But we brought it down to $150 [million] and then we had some further peer review and they looked at the figures again and said we&rsquo;re going to be spending up to 141,&rdquo; Garcia said. “But I&rsquo;m going to keep saying 150 just in case there are &ndash; &rdquo; Garcia was stopped by the audience&rsquo;s laughter, “I don&rsquo;t want anyone to be able to say, ‘You went above and beyond what you indicated.&rsquo; So frankly what that does is give us about $17 million to work with.&rdquo;

Funding mechanisms
Garcia said the new courthouse would cost the county about $10 million a year in payments. He said the total cost will be offset by a $30 million contribution from the City of Edinburg, $20 million from the Hidalgo County Metropolitan Planning Organization, which he said is allocating $8.5 million of that amount to improve drainage around the new courthouse. Garcia said $45 million is expected to be generated over the next 30 years from additional court filing fees the Texas legislature enacted three years ago. He said the county expects to dedicate about $1.5 million from the filing fees to the $10 million in annual payments. Garcia said savings from refinancing existing bonds soon to mature will also be applied to the cost.

Garcia said in the year 2027 agreements will kick in between the county, an electric generating plant and a wind farm that will add more than $10 million to county coffers, fund which can also be allocated to paying off the courthouse.

According to the video, with inflation increasing construction costs at a rate of between 4 percent and 6 percent a year, waiting just three years to begin construction could increase the current estimated cost of $150 million to $171 million.

Why not renovate the existing building?
Trying to renovate the current facility would not be fiscally responsible and would be a waste of taxpayer dollars, the video asserts, noting renovation costs are estimated at $50 million “and that doesn&rsquo;t address the safety, health or space issues.&rdquo;

Renovations would also have the added cost of millions of dollars temporarily relocating courts during renovation.

“ Your taxpayer dollars can be better spent construction a building that will last decades, not years,&rdquo; said the video&rsquo;s narrator.

Why in Edinburg?
Garcia said in 1910 the property on which the current courthouse is located was conveyed to the Hidalgo County Commissioners Court by two families that includes a clause that if the county were ever to move the courthouse away from its present location the courthouse square, the real estate, the building and everything on it will automatically be transferred back to those families.

“And that would be &ndash; well, we haven&rsquo;t figured out the costs &ndash; but that would obviously include some expenditures,&rdquo; Garcia said.

Precinct 4 Commissioner Joseph Palacios told the Progress Times the commissioners court has yet to approve a final building design. The commissioners this summer decided on the architectural firm of HDR Architecture that has been working with ERO Associates of McAllen. ERO has been on the project nine years and did much of the preliminary designs. The commissioners also recently finalized a $4.5 million contract with Jacobs Project Management Company to oversee the courthouse construction. Palacios said the Texas Department of Transportation has to give formal approval to close Business 281 in downtown Edinburg and the Edinburg City Council still has to formally approve the $30 million it has verbally committed. Palacios said commissioners hope to break ground on the project within the next 12 to 16 months.