After six weeks of football, the Mission Veterans Memorial Patriots are the only team in the Valley sitting at a perfect 6-0. Doing it without playing a game on your home field makes the feat even more impressive.

Dual-threat junior quarterback Landry Gilpin isn’t bothered by not being able to play at Tom Landry Stadium while it undergoes renovations, but sees it as a challenge that will prepare the Patriots (6-0, 4-0) for the postseason. 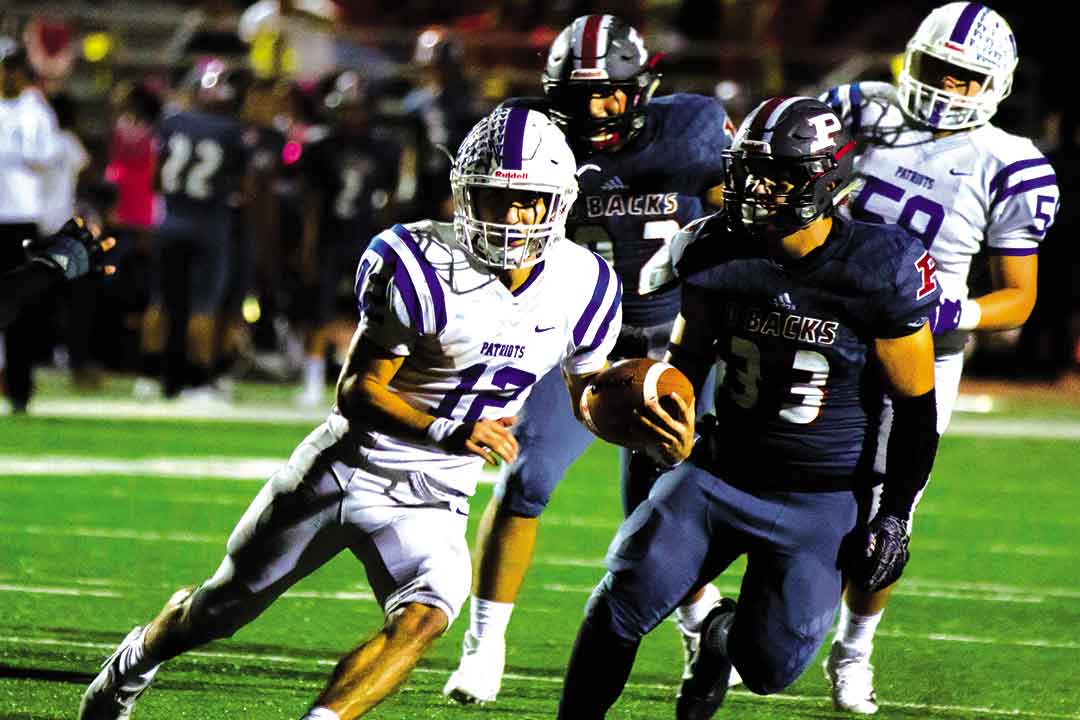 “It’s awesome the way our team adjusted to playing on all these different fields, that’s how it’s going to be in the playoffs,” Landry said. “We’re not going to get very many home games and we’re going to have to go travel. For us to be able to do that early in the season and have success, it’s good for the team.”

Head Coach David Gilpin and the Patriots are fresh off a 61-38 rivalry game over the Pioneer Diamondbacks (2-3, 1-2), last year’s 31-5A co-district champion. Before the game, a Pioneer sign in the stands read “Pioneer versus Landry,” and the Patriots took exception to that.

“I take great pride in our program; I take great pride in the fact that we play with one heartbeat,” Coach Gilpin said after the win. “Looking at the sign that was on the board when we walked out here that said ‘Pioneer Football versus Landry’. We took a little bit of that to heart. Our kids came out to play with a chip on their shoulder and we’ve played physical football all year long and we came out to do so tonight.”

After the game, Landry said the team is more than just one player, the Patriots are loaded on both sides of the ball. Sophomore receiver Mikey Garcia finished the game with nine catches for 250 yards and four touchdowns, consistently breaking free from the Pioneer defense, while fellow sophomore, running back Danny Cantu, ran for 115 yards and a score of his own. Landry racked up 375 passing yards, 267 rushing yards and eight total touchdowns in the win.

On the year, the Patriots’ signal caller has thrown for 1,510 yards and 16 touchdowns while running for 1,049 yards and 14 more scores on the ground.

Now, Coach Gilpin and Veterans Memorial are ready for their next test, which could be the biggest hurdle on the Patriots’ path to the 31-5A crown, a game against last year’s other co-district champion Laredo Nixon Mustangs.

“We know the physical brand of football that Nixon plays; they are a physical football team on the offensive side and the defensive side,” said Coach Gilpin. “They put 71 points on us last year, obviously we’ve had that game circled as something we need to do better than we did last year.”

In last year’s meeting, the Mustangs came out on top 71-45. Now, the improved Patriot defense is determined to get revenge and erase the 2016 loss from memory while keeping their unbeaten record intact.

Senior defensive back Giovanni Grimaldo, who holds down the secondary of the Patriot defense with his team-leading 74 total tackles and two interceptions, said this year’s unit is ready to show they’ve improved.

“We’re looking forward to it. It’s a way different defense from last year, we’re going to be a lot better.”

Coach Gilpin said his team is looking forward to tonight’s challenge as the Mustangs come down to the Valley.

Kickoff between the Patriots and the Mustangs in their pivotal 31-5A matchup is set for 7:30 p.m. tonight at Tiger Stadium in Mercedes.