According to Mission Parks and Recreation Department Director Brad Bentsen, the park, located on the south side of First Street between Conway and Francisco Avenues, is built over a covered irrigation canal, an area that at one time had become an illegal dumping site. 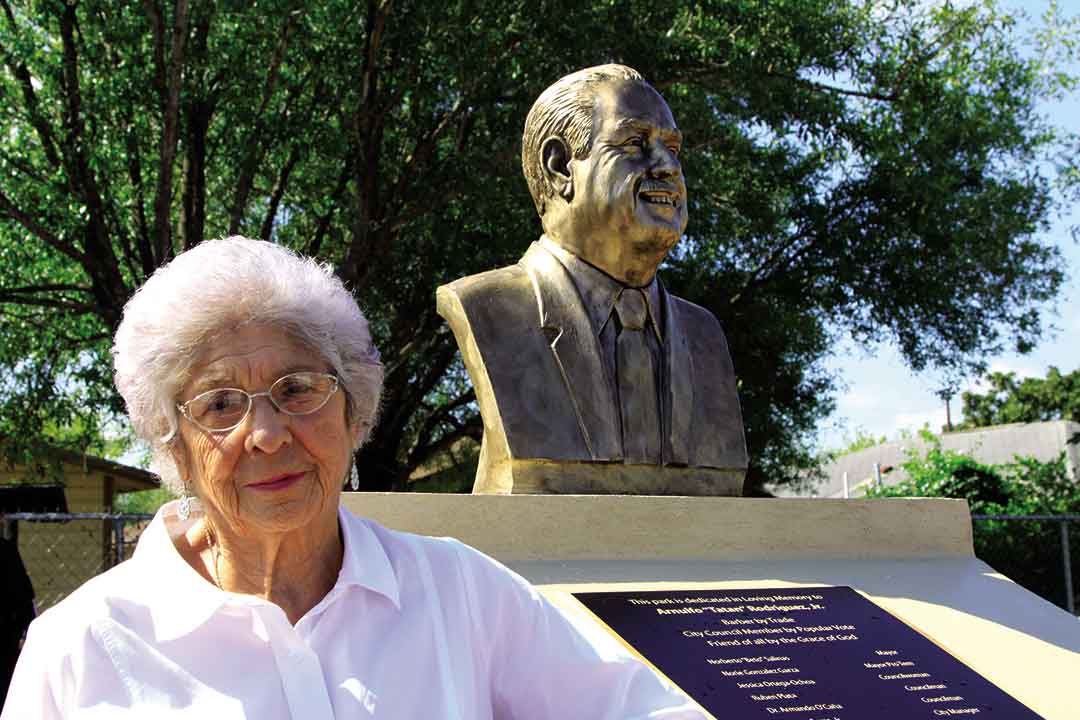 With it’s basketball court, splash pad, mini soccer field and playground equipment, the park was intended as a place where parents could take their young children to play, said Mission City Manger Martin Garza. However both Garza and Bentsen explained a problem soon developed when teenagers began using the mini soccer field intended for use by small children. Neighbors living on Rios Street, whose back yards abutted the park, complained about kids climbing over their fences to retrieve errant soccer balls. Bentsen said on one occasion children left one resident’s hose running after turning on a backyard faucet for a drink of water.

Garza said Bentsen met with neighbors and came up with an elegant solution to the problem: turn the soccer field into a butterfly garden.

On Monday morning about 100 people gathered at the park to commemorate the opening of the butterfly garden and the unveiling of a bronze bust of the park’s namesake sculpted by Edinburg artist Douglas Clark who is known for creating most of the sculptures in McAllen’s war memorial . More than 20 of the participants were Rodriguez’s family members, including his wife of 50 years, Irma, and seven of the couple’s nine children.

Beside plants that attract butterflies, the garden features a fountain, park bench covered by a ramada and walking paths with the large bust of Rodriguez at the garden’s entrance from First Street.

At Monday’s ceremony Rodriguez’s daughter, Betty Mendoza, addressed the audience on behalf of her family thanking the city for honoring her father.

“This bust memorializes dad’s character,” Mendoza said. “He was an individual who enjoyed the outdoors, music, barbecues and meeting people. Tatan was the type of person who made everyone around him feel welcome, just like this park does to our community.”

And the butterfly garden has not deprived children of their soccer field. It was moved further east where it abuts to the south a vacant lot and what appears to be an abandoned residence, so even if a soccer ball finds its way over a fence there is no one there to annoy.