Except for a smaller press box and visitor’s bleachers – and the absence of a 12-foot tall statue of Tom Landry out front – Mercedes High School’s Tiger Stadium is nearly a mirror image of the as-yet completed Tom Landry Hall of Fame Stadium at Mission High School.

And despite having to drive east a half hour to get to the Oct. 13 game between the Veterans Memorial High School Patriots and Laredo Nixon High School Mustangs, the Patriot’s were well represented by fans in the home team’s bleachers. And complaints about having to make the drive from Mission to Mercedes because the Tom Landry Stadium is still under construction two months after its original completion date were few and far between. 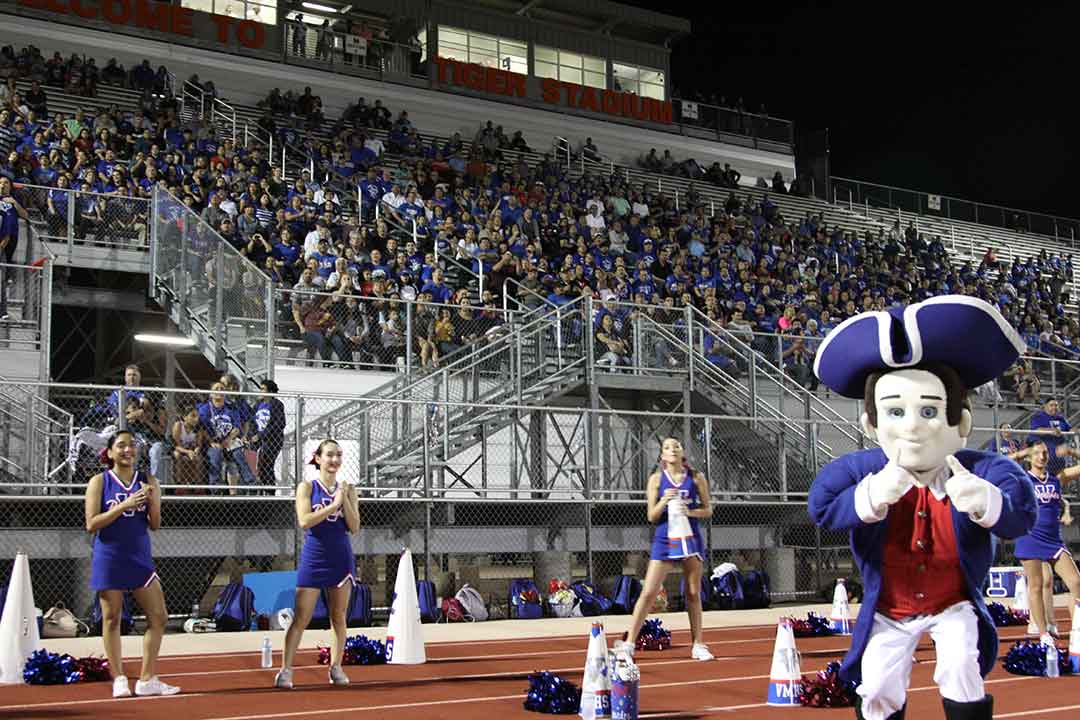 “I’m kind of disappointed for the boys because they didn’t get a chance to play in their new stadium,” said Ed Gilpin, father to Patriot’s head coach, David Gilpin and grandfather to Patriot’s junior starting quarterback Landry Gilpin. “But on the other hand I understand that construction is not an exact science.”

The elder Gilpin made his comments during half time of the game which the Patriot’s won 48 to 17 leaving the homeless team with seven wins and no losses.

“It doesn’t matter where they play, the kids just want to play,” Gilpin said.

VMHS sophomore, Mauricio Gonzalez, and junior, Eric Castro, were among many students sitting together in the stands. Both said they haven’t missed a game despite the first four home games having been moved to various stadiums throughout the Valley.  And both agreed once the stadium is completed it will be a great legacy for the school and the fact it wasn’t completed on time, in time, will be long forgotten.

Mission attorney, Aron Peña, said he wasn’t happy having to drive to Mercedes, especially after learning many of the delays were caused because of the accessories being added to the new stadium such as a state of the art public address system, special graphics and state of the art track timing system.

“When we were younger we didn’t need all of those amenities,” Peña said.

One woman, a VMHS staff member who asked her name not be used, said she didn’t mind traveling to other schools for home games herself, but she felt badly for the seniors on the team who possibly could end their last season never playing at home.

“Of course that is offset by the fact they haven’t lost a game yet,” she said during halftime.

Mission resident Laura Rangel was at the game to support the team and  assistant VMHS coach, Joseph Villarreal. Rangel was asked if she was bothered having to travel to Mercedes for the home game or if she was taking it all in stride.

“I think it’s all in stride,” Rangel said. “I’ve always been a football fan so wherever the game’s going to be played, I’ll go.”

Perhaps those most negatively impacted by last week’s home away from home game were the visiting Mustangs from Laredo.

Though originally from Laredo, Melissa Berdiguel now lives near Mission. She traveled to the game with her three children where all sat on the visitor’s side stands with her sister and brother-in-law who had driven from Laredo, a distance of 181 miles and nearly a three-hour drive to Mercedes. The family sat on the visitor’s side where the marching band nearly outnumbered the fans.

“When we arrived I looked around and told my husband, ‘Look, hardly anyone from Laredo came,’” Berdiguel said, adding it wasn’t until her brother-in-law was well into his trip that he learned the game was being played in Mercedes and not Mission.

Neither the VMHS Patriots or Mission High School Eagles were scheduled for  home games tonight in the Tom Landry Hall of Fame Stadium.

Michael C. Montalvo, whose construction company, Holchemont Ltd., is building the new stadium, told the Progress Times Wednesday there were still some issues with the installation of the stadium’s elevator that would delay state inspectors from inspecting the elevator until next week. He said he still hopes to receive the green light for the stadium to be used in time for Mission High School to play La Joya Palmview High School in their new stadium next Friday, Oct. 27. If it’s not ready Mission CISD Athletic Director Leticia “Letty” Ibarra said the game will be played at Hidalgo High School in Hidalgo.

Rolando Espinoza was also at the Oct. 13 game in Mercedes. His son, Erik, is a center on the team who broke his leg in the season opener. Espinoza said he didn’t mind the travel so much as he was concerned about the loss of funds the team’s booster clubs were losing from concession sales that stayed with the host stadium’s boosters.

MCISD’s Ibarra said she was not ready to say how much the away games have cost the district or its boosters noting before that time comes she would have to calculate what the district’s costs would have been had the games been played at home. She noted the district has home game expenses for among other things, ticket takers, ticket sellers, police security, announcers and the chain crews that keep track of the first down markers.

But as an example of the costs of playing away she noted the 18 man scoreboard crew at McAllen High School cost $2,900 alone. She said the district has also had to pay for transportation and meals for the team, band and cheerleaders.

“You couldn’t put a price on what we’ve been through,” she said.

Ramiro Garcia, president of Mission High School’s Soaring Eagles Booster Club, said the club loses between $1,000 and $1,100 per home game based on last year’s earnings. He said the money from concession stand sales goes toward the cost of the team’s annual awards banquet, pregame meals for the football team, fees for coaches to attend summer training clinics and student scholarships, among other expenses.

“For us it’s had a huge impact because concession sales is the bulk of our funding,” Garcia said, adding the booster club is making up for the lost revenue by holding T-shirt sales and other fundraisers.

Ibarra said the varsity teams are not the only ones losing out on fundraising opportunities noting freshman and junior varsity teams that would use the new stadium would also lose out. Still, Ibarra manages to maintain her sense of humor about it all.