Another hurdle has been passed toward creation of a 120-mile beltway for Hidalgo County.

On Tuesday contractors from across Texas and out of state met with officials of the Hidalgo County Regional Mobility Authority in a mandatory pre-bid meeting to discuss plans for the first 12.2 mile, $168.8 million leg of the beltway that will traverse southwestern Hidalgo County. 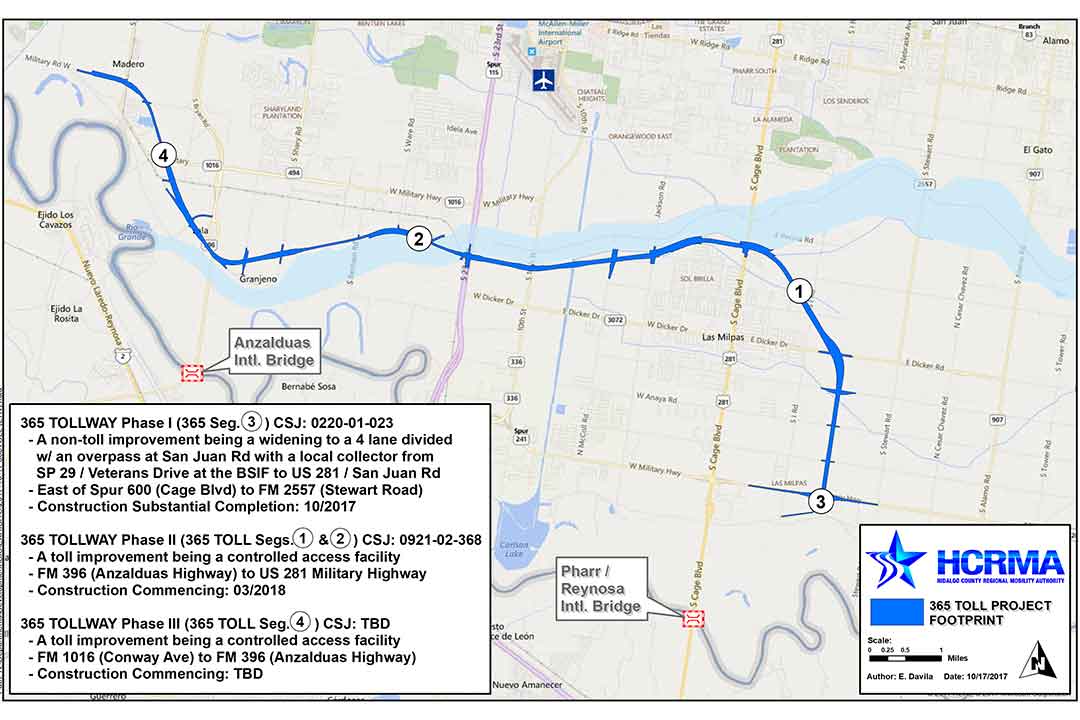 The deadline for submitting bids on the project is Nov. 10 and the contract will be awarded on Nov. 28 followed by a pre-construction meeting on Jan. 8.

Pilar Rodriguez, the HCRMA’s executive director, said the agency hopes to start construction in March on the proposed four lane highway known as the 365 Toll Project with a 42-month construction schedule. He said the highway is being designed with the potential to expand to six lanes with three in each direction.

The first leg of the highway will run from just west of the Anzalduas Highway at the Pharr-Reynosa International bridge, north of East Dicker Road and then west through Granjeno and end south of Mission near Madero, according to a HCRMA map.

Rodriguez said the 12 mile project is the first leg of a planned 120-mile loop that will traverse the entirety of Hidalgo County going as far north as Highway 490, north of Faysville, and as far west as the area between Palmview and Peñitas and then south until reconnecting with the southern loop.

“The plan is to build a segment at a time until we get the whole loop built,” Rodriguez said in a telephone interview Wednesday. Rodriguez said the loop is part of a 38-year, $2 billion plan that has been in the making since before 2010.

“At the time the authority was trying to fund the entire project in 2008 but that’s when the market crashed and we just couldn’t get a project that big funded,” he said.

Rodriguez said the Texas Department of Transportation is funding $128 million for the first leg of the project with the remaining funding coming from portions of the state’s vehicle registration fees, $42 million from the state and the remainder from bonds that will be paid from the tolls. Rodirguez said the toll road, which is intended to relieve international tractor trailer traffic from Expressway 83, will cost about 17-cents per mile for passenger cars and 50-cents per mile for commercial trucks.

“So it will be about six dollars a truck for the entire length of the proposed section,” Rodriguez said.

Despite funding delays, Rodriguez said the project is not expected to take as long as originally thought to complete.

“We’ve been able to accelerate a little bit of that time table so I would say it would be in the order of about 25 more years before we have the entire loop built, based on our current schedule,” Rodriguez said.

Rodriguez said the remaining segments of the project are still in the planning stages.