Don’t be surprised if you look up the word “domination” in the dictionary and it says something like, “Complete superiority over an opponent, much like the Veterans Memorial Lady Patriots volleyball team has exhibited over its district opponents.” While words like domination and superiority tend to be over-used in the world of sports, when it comes to the Lady Patriots record against each and every district opponent they’ve had over the past five years, they are both entirely apropos. 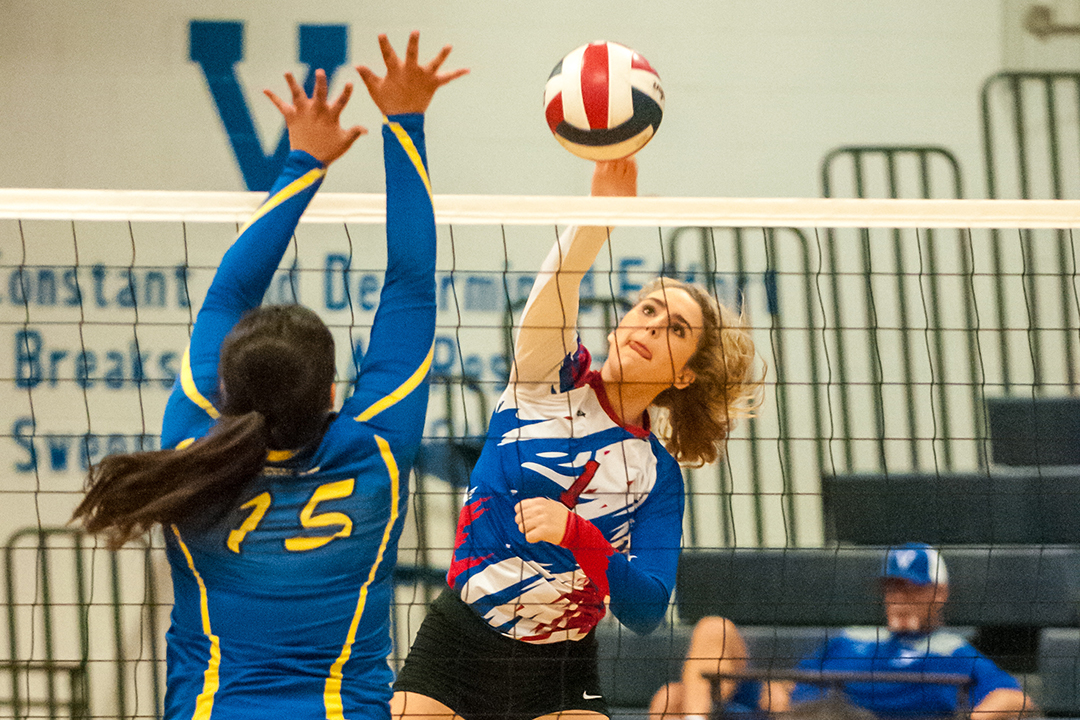 So what accounts for this perennial dominance? Veterans Memorial head coach Diana Lerma believes she has the answer.

“Having a group of girls that are hungry, that are willing to sacrifice their entire summers by participating in conditioning programs and that are willing to work hard year-round makes winning look easy even though it’s not,” Lerma said. “I’ve used the story of the tortoise and the hare to help the girls understand that even though they have the skill and the ability, when they’re playing teams that are struggling they have a choice. They can either lay back and play at their opponent’s level, or they can be prepared and understand their role and play at the same high level no matter who is on the other side of the net.”

While it’s true that Lerma was relieved of her coaching duties part way into the 2015 season and was not reinstated until after the 2016 season, she is the architect of the Veterans Memorial volleyball program. And it is under her tutelage that the Lady Patriots have had the most success. That includes back-to-back trips to the Regional Semifinal (fourth) round of the state playoffs in 2013 and 2014.

While reaching the fourth round of the state playoffs two years in a row is an accomplishment that most coaches would be more than satisfied with, Lerma has had her girls working towards a new school record of advancing even further into the playoffs this year ever since her return to the team. What have they been doing to work towards this goal? Lerma explained her strategy designed to work against those teams with much taller players that they will be facing as they advance deeper and deeper into the playoffs.

“There’s a drill we’ve been working on that is designed to make our back row come in even when our front row gets blocked,” explained Lerma. “The back row cannot be bumping the ball. They have to be aggressive because they’re going to be counted on to bring it as a hit instead of a free-ball (A ball that is passed over the net because an attack wasn’t possible). That’s because if they free-ball the ball over the net, our opponents have a better chance of getting the point. So we’ll be counting on everybody hitting the ball and that’s going to help us in the playoffs.”

“We’ve been playing together since we were little,” Garza said. “We’ve practiced together, we’ve played together and now we’re winning together. We’re always together. Even outside of practice. We love our coach, we love our team and we love the sport of volleyball.”

Junior outside hitter Makenzie Gerlach has been a member of the Lady Patriots’ varsity squad since her freshman year. As a result, she was part of the teams that fell short of reaching the fourth round of the playoffs like the 2013 and 2014 Lady Patriots did. While Gerlach and her teammates have been using last year’s second-round playoff loss as motivation to go deeper into the playoffs this year than any Lady Patriots team ever has, that is much easier said than done. Especially when they go up against the big city teams with significantly taller girls up front. But Gerlach believes that she and her fellow Lady Patriots will be ready to take on those vertically superior teams.

“We’ve been practicing hitting from tall boxes and hitting down the way the tall girls hit,” Gerlach said. “Also, we went to a Houston tournament over the summer where we won five of the eight games we played. And that’s going up against hitters that were all 6-foot and above including a 6-foot-4 and a 6-foot-6 tall girl. We were the shortest team there but we managed to win games nobody thought we could.”

“We got used to the three-hour trips to Laredo,” Howell said. “We all already knew where our positions on the bus were going to be so we’re used to traveling. We just want to go compete and having to travel shouldn’t be a problem.”

The Lady Patriots will begin what they hope to be a historic playoff run with a bi-district game against the fourth place seed in District 32-5A either Monday or Tuesday. However, that could be either Mercedes, Brownsville Lopez or Brownsville Pace since as of press time those three teams were tied for fourth with identical 6-8 records. The day, time and location of that first-round game will be determined later.