Getting “back to the basics” of helping its members grow their businesses is the goal of the head of the Greater Mission Chamber of Commerce. That’s the message Robert Rosell, the chamber’s president and chief executive officer, delivered to about 200 people attending the organization’s annual banquet Thursday, Oct 19 at Mario’s Banquet and Conference Center in Mission where several city businesses received chamber awards. The Progress Times newspaper also bestowed five citizenship awards at the banquet. (See related report.)

“What does that mean?” Rosell asked the crowd, many of whom were decked out in large hats for the ladies and bow ties for the men in a Kentucky Derby-themed event dubbed, “A Night at the Derby.” “It means we are going to provide the tools and resources to our members so that they may have the best opportunity to run a successful business. We are going to provide a collective array of resources so our members use and understand the value of being a member of Mission Chamber of Commerce.” 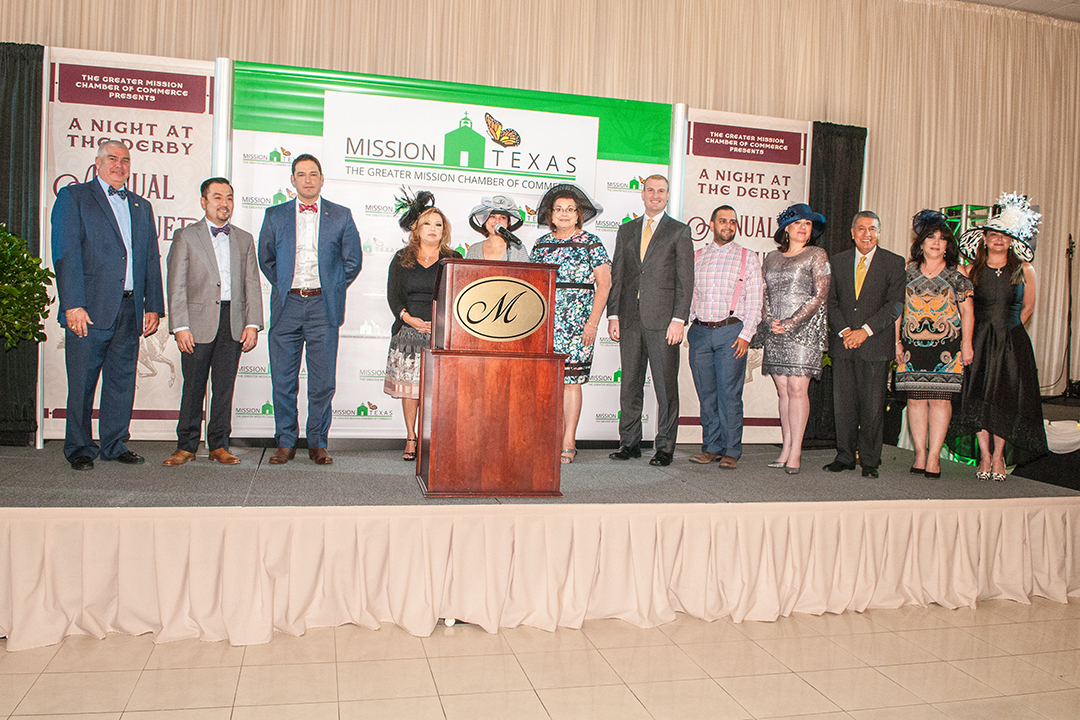 Outgoing board of directors president, Dan Martin, noted some of the measures to which Rosell alluded include smaller educational and informational events for members. And incoming Chamber Board President Trung Nguyen, said the chamber plans to work with Mission’s leadership and Economic Development Corporation to improve commerce in the city. He pointed to the city’s new Center for Education and Economic Development and the soon-to-be Mission Events Center as examples of new initiatives with which the chamber has been involved.

“We have an exciting year ahead of us and want to continue to do what has worked and made us successful,” Nguyen said, having just named the members of this year’s board of directors. They are: Albert Chapa, Cathy Garcia, Cesar Suarez, Dan Olgetree, Deborah Franco, Diana Alcocer, Lance Ames, Nick Espinosa, Ryan Krause, Veronica Ghavidel, Macarena Ortiz, Sandra Vecchio, Lorenzo Garza and Dr. Pankajkumar Shah.

Rosell later returned to the podium to name Lupita Ramirez and her Conway Avenue-based New York Life Insurance office as the city’s Small Business of the Year. Rosell said the award goes to companies that have “demonstrated exemplary best practices.” Rosell said Ramirez has been operating her business in the city since 2013.

Rosell announced the chamber’s Entrepreneur of the Year was Sole Racing, a company established in 2013 that organizes “quality road and trail races throughout the Valley while promoting the importance of a healthy running community,” Rosell said.

Rosell said the business has had much success holding races on the Mission Hike and Bike Trail and noted a recent published report featuring one of the company’s owners, Robert Ruiz.

And Rosell announced this year’s Premier Corporate Partner of the Year is produce wholesaler, Grande Produce. Founded in 2004 by Juan Cano, Rosell said the company evolved from Cano’s produce transportation company that, with its connections with many growers throughout Mexico, allows the company to offer a variety of products year round.  Rosell said the company has grown tremendously over the past decade in part because the company allows customers to mix and match their orders giving them flexibility they won’t find elsewhere. Veronica Ghavidel accepted the award on behalf of her employer. She later took home the award for best hat. German Segura was noted for having the best bow tie amongst the gentleman. It was red with a complementing red carnation flower in his lapel.

And Rosell announced the chamber’s Community Organization of the Year is the South Texas Juvenile Diabetes Association. Rosell said the organization was started by parents of diabetic children as a support system for the children and their families.

“Diabetes not only impacts the individual but the entire family,” Rosell said as he accepted the award on behalf of Debra Franco, president and co-founder of the organization. “Therefore, the South Texas Juvenile Diabetes Association encourages the entire family to be involved with them for support of the diabetic child. STJDA has filled a need in the community for families struggling with how to help their children.”