About 200 people turned out Saturday, Oct. 21 to witness the selection of the Texas Citrus Fiesta’s next Princess Anna, a position in the TCF Royal Court open only to 6 year olds.  And hoping to attract as many entrants as possible the deadline to enter at least one TCF event has been extended until Thanksgiving.

Last Saturday 15 girls wore ball gowns and walked the green carpet down the center of the crowd gathered at the Mission Community Center. As an announcer read biographies of the girls they took their turn climbing onto the stage and curtseying before Queen Citriana who sat alongside King Citrus and between the youngest members of the current Royal Court. The pageantry followed individual interviews by a panel of judges comprised of one man and two women, all from outside of Mission, said TCF Director Bibi Peña. When all the festivities were done the judges named Jalynn Mascorro, a first grader at John H. Shary Elementary School, as Princess Anna 68th. 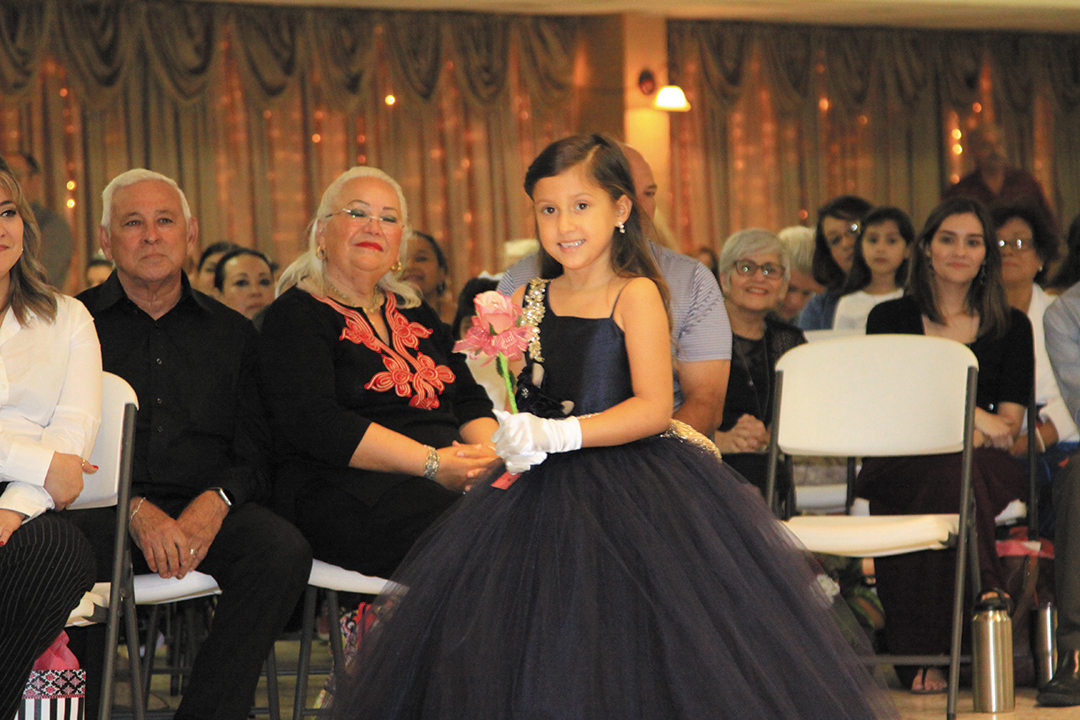 The selection of Princess Anna was the second event of the 2018 Texas Citrus Fiesta. Duchesses in the court were selected in September. The remaining members of the 2018 Royal Court were announced at the end of the TCF’s Royal Coronation in January.

Peña said there were originally 16 Princess Anna contestants in this year’s competition but one girl had to miss Saturday’s competition due to illness. She said last year five girls competed. Peña credited better pre-event publicity for the higher turnout.

CF officials are hoping also for better participation in three other events, all happening on Jan. 13. They are the grapefruit pie baking contest, the shoebox float competition and product fashion show.

Bryan Elementary School students were credited with creating the majority of last year’s approximately 210 shoebox float entries where librarian Elizabeth Mendez has made it a point to keep alive the tradition of creating the miniature parade floats covered in dried regional citrus products with nearly all of the school’s fourth and fifth grade students participating. Though the competition is open to all fourth and fifth graders in Mission CISD, Sharyland and La Joya ISDs, only a few students from  Mims and Cavazos elementary schools in the MCISD also participated, said TCF board member, Lisa Rivera, who chairs the shoe box competition committee.

There are cash prizes for winners and the librarians of the schools with the winners but as of press time this year’s amounts were still being determined. Winners and librarians last year received $100. All entries must be submitted by Jan. 11 for display at Speer Memorial Library with judging the following day. Winners will be on display and announced Jan. 13 at the Mission Community Center.    Rivera said anyone who wants to learn how to prepare the materials that go into making a shoebox float can find instructions on the TCF Facebook page and there is  an eight minute instructional video on YouTube explaining the process.

TCF board member, Silvia Vick, is hoping to increase the number of participants in this year’s product costume competition. Vick, who chairs the competition, said the TCF received only five entries in the full costume competition and just three hat entries last year. There is no fee to compete in the three divisions, Elementary, for ages 4 to 12, the Teen Division for ages 13 to 18 and the Adult Division for people 19 and older. At least 50 percent of the costumes must be made of natural materials grown in the Valley.

Vick said the original deadline for entering the contest was Oct. 9 but because so few entries were received she has extended the deadline to Nov. 22.

“This is one of the most costly and labor intensive events so it’s very hard to get people to participate,” said Vick, who hopes more people will enter this year to keep the tradition alive.

There will be a fashion show and announcement of winners at the Mission Community Center on Jan. 13.

The pie contest winners will also be announced at the product costume show. Contest chairwoman Nydia Alvarez-Alonzo said this will be the second annual event adding, “We’ve ordered trophies for the next 10 years.” She said last year there were about 18 entries and the competition was held during the Citrus Youth Show and Fun Fair at Leo Peña Park. She said the competition is being combined with the others this year at the community center. She said there are guidelines that must be followed for entrants who can find details on the TCF website. As an example she said entrants must provide two pies, one for display and the other for judges. The entry fee is $10. The first place winner receives a trophy and second and third place winners receive medals, she said.

Alvarez-Alonzo said entry forms and guidelines can be obtained by contacting the TCF offices or emailing her at nydalonzo14@sbcglobal. She said entries will be accepted up to the day of the competition.

A fifth grade teacher at Marcell Elementary School and president of the local Texas Classroom Teachers Association , Alvarez-Alonzo said students receive classes on the citrus industry and the TCF on Fridays in January to teach them about their local heritage.

“We’ve promoted citrus forever at our school,” Alvarez-Alonzo said. “You can’t have a winter parade and have the Winter Texans know more about it than our kids in Mission.”