It’s playoff time for high school volleyball teams across the state of Texas and three Big 7 teams have taken the first step in what they hope will be a deep run into the University Interscholastic League’s (UIL’s) state playoffs. The 11-5 Sharyland Lady Rattlers, the 12-4 Pioneer Lady Diamondbacks and the 16-0 Veterans Memorial Lady Patriots all took care of business in the bi-district round by defeating the three District 32-5A teams they were matched up against.

Unfortunately, not every Big 7 team that qualified for the playoffs fared as well as those three 31-5A teams fared. After winning their District 30-6A fourth-place tie-breaker against the La Joya Lady Coyotes, to earn the right to advance into the bi-district round, the 5-7 Mission Lady Eagles fell to the 14-1 Laredo United Lady Longhorns in straight sets (25-11, 25-8, 25-11) Tuesday night to bring their otherwise successful season to an end. 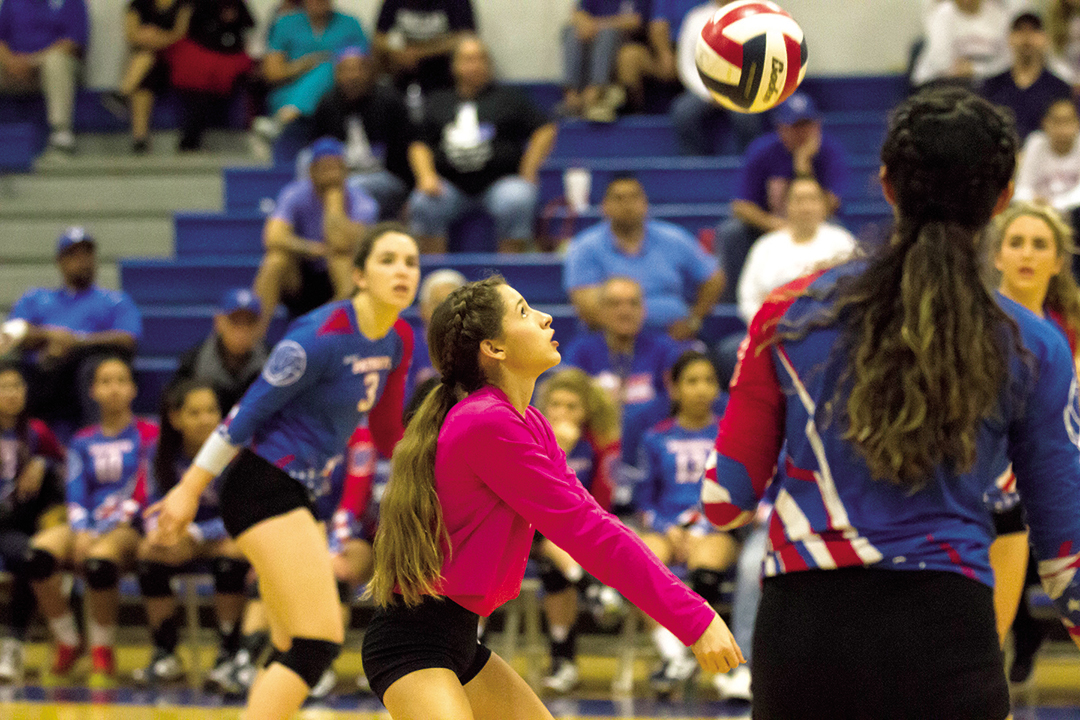 But with three of four Big 7 teams advancing into the Area round of the state playoffs, let’s take a look at each of their first round games, their upcoming second round games and how the Lady Rattlers and the Lady Patriots could go up against each other in the third round.

After the game Lady Patriots’ sophomore middle blocker Cassandra Lerma shared what being ranked 10th in the state means to her when she said, “It’s actually kind of amazing. Once they ranked us 10th, I said, “Wow, they must actually think we’re good.” I thought people were just saying that and while I knew that we’re good, it means that we can actually make it.’”

At 5-foot-2 and 100 lbs., Veterans Memorial’s sophomore libero Veronica Cantu is the smallest player on the Lady Patriots’ roster. However, Cantu has never been one to let her diminutive size stop her from being a four sport athlete. In addition to playing volleyball, Cantu plays basketball, tennis and runs track for the Lady Patriots.

In her second year on the Lady Patriots’ varsity volleyball squad, Cantu remembers all too well last year’s second round playoff loss. As one of the top teams in the Valley, the Lady Patriots are not only used to, but they’re pretty much expected to, advance into third or even fourth round of the playoffs year-in and year-out.

When asked how last year’s early exit from the playoffs has impacted her this year, Cantu said, “As a freshman last year my play time was very limited. But coming into this season I wanted to show Coach Lerma that I had chemistry with the team and that my ability to bond together with my teammates will enable us to make it farther into the playoffs this year than we did last year.”

If the Lady Patriots, who played their Area round game against Gregory Portland last night, do advance into the third round, they will be taking on the winner of the Sharyland/Flour Bluff game in the Regional Quarterfinals, Monday or Tuesday of next week.

Next up for the Lady Rattlers are the Flour Bluff Lady Hornets who came into the playoffs as District 30-5A’s third seed with a 16-5 record. The Lady Hornets defeated San Antonio Harlandale in four sets by scores of 23-25, 25-19, 25-23 and 25-15 in the bi-district round. The Lady Rattlers vs Flour Bluff Area round match-up will be taking place Saturday, November 4 at 1 p.m. at Falfurrias High School.

Should the Lady Rattlers emerge victorious from that game, they will be taking on the winner of the Mission Veterans/Gregory Portland Area round game in the Regional Quarterfinal round Monday or Tuesday of next week.

Pioneer Lady Diamondbacks
The Pioneer Lady Diamondbacks defeated the Edcouch-Elsa Lady Yellowjackets in four sets (25-16, 23-25, 25-19, 25-11) Tuesday night to advance into the Area round of the state playoffs for the fourth year in a row. In that game, Mikayla Zimmerer had two aces, 18 kills, 12 assists, 16 digs and 12 assists, Audrey Smith had four aces, eight kills, one block, 36 assists and 16 digs, Daizy Coronado had one ace, 17 kills, two blocks and three digs, Daniela Alvarez had eight kills and two blocks, Christina Ybarra had five assists and 27 digs, Samantha Ayala had four aces, two kills, two blocks and five digs, Brianna Ramos had two aces and 14 digs and Alícia Martinez had five kills.

If the Lady Diamondbacks are going to advance into the Regional Quarterfinals for the first time in school history, they will have to get past District 29-5A’s champions, the 10-0 San Antonio McCollum Lady Cowboys. McCollum defeated Corpus Christi Veterans Memorial in four sets (25-11, 19-25, 25-18 and 25-18) Tuesday night to advance into the Area round. The Lady Diamondbacks and the Lady Cowboys will be playing Saturday at 1 p.m. at Alice High School.