The Veterans Memorial Patriots and Sharyland Rattlers have been on a collision course all season. As two of the Valley’s most proven programs, both teams have put themselves in position to claim the 31-5A crown in 2017.

Now, the two powerhouses are set to meet at 7:30 tonight at Valley View ISD Stadium in Pharr where the winner will move one step closer to a district championship. 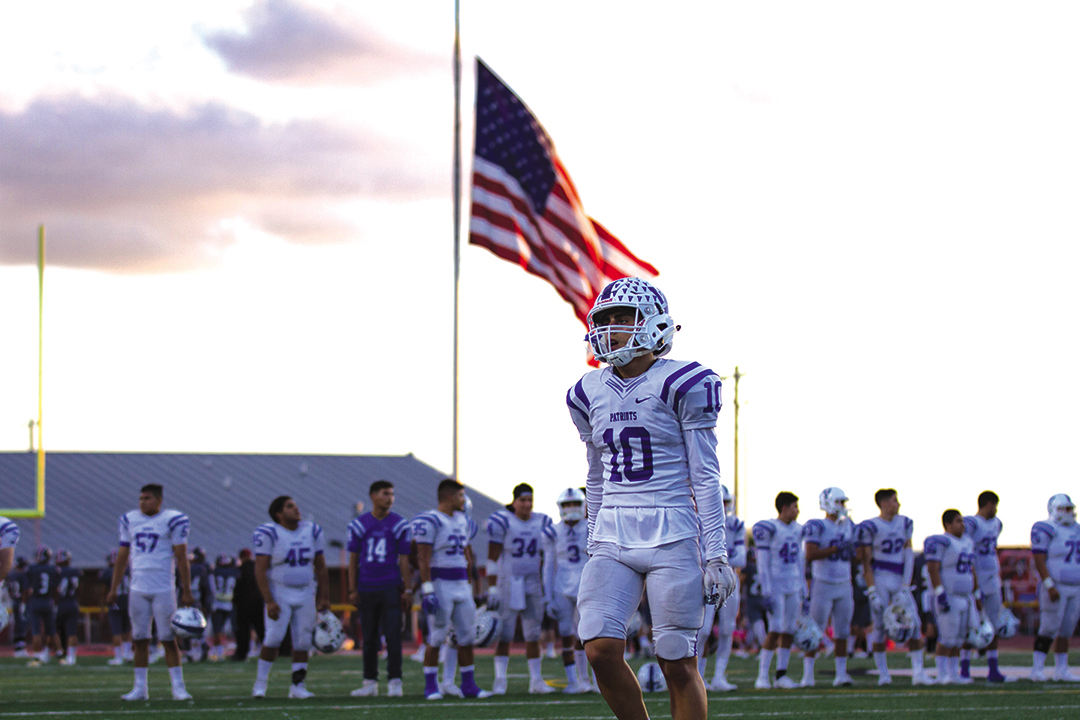 Mission Veterans (8-0, 6-0) enters the game unbeaten on the year while leading District 31-5A, as they have outscored opponents 329-167 thus far. The accomplishment is even more impressive when you take into account the Patriots will finish the year without playing a single home game due to the delayed renovations of Tom Landry Hall of Fame Stadium.

From the outside, being unable to play on your home-field could derail a team’s season, but Patriots’ Head Coach David Gilpin and his program haven’t been “fazed” in the least bit.

“When things are out of your control, you have to go about your business and that’s what we’re trying to do,” Gilpin said. “We’ve made it to 8-0, not many teams in the state of Texas can say that right now. We’re real proud of our bunch. We don’t look at it as adversity, we just go wherever we gotta go and strap up and play there.”

The Patriots are coming off a 26-24 victory on the road last week over Rio Grande City in what wound up being their closest district game of the year. After building an early 20-0 lead, Rio fought back to close the gap to two, but the Veterans Memorial defense stiffened up to seal the win and keep the Patriots perfect record intact.

After Mission Veterans’ Week One 31-26 win over Harlingen, Gilpin challenged his group to finish the regular season unbeaten and march the team’s perfect record to 12-0, which would put the Patriots back in the Regional Round of the Texas state playoffs. While he is proud of the team’s accomplishments up to this point, Gilpin realizes his team has two tough opponents standing between them and 10-0, beginning with Sharyland tonight.

“While we’re proud of what we’ve accomplished, while it has been a great year up to this point, we’ve done nothing except for clinch a playoff spot, that’s it,” he said. “We haven’t clinched a district championship, we haven’t won in the playoffs, and we haven’t gotten to 10-0, which would be the first time in the history of our school.”

Standing between that perfect record is the Sharyland Rattlers (6-2, 5-1), who present the biggest threat to spoil the Patriots unbeaten season and hold district championship aspirations, as well.

The Rattlers were riding a six-game win streak that finally came to an end in last week’s 49-14 loss to Laredo Nixon. Head Coach Ron Adame is confident in his team’s ability to bounce back as they did after Sharyland’s Week One loss to Weslaco East, which resulted in six straight victories.

“Our boys seem to have a short-term memory and that’s something we talked about that night,” Adame said. “It doesn’t feel good when you lose, but that’s the thing about athletics, it’s going to teach you how to win, it’s going to teach you how to lose. All of our program, from our players to our coaches are focused on what’s ahead and we’ve got a big challenge ahead of us in Mission Vets.”

Sharyland’s road to 6-2 hasn’t come without adversity, but the Rattlers have rolled with the punches. Without starting quarterback Edgar Longoria the first two weeks of the season, the Rattlers stumbled out of the gates with a 62-0 loss to Weslaco East, but bounced back the following week with a 24-20 win over Edinburg North.

After the opening loss, the Rattlers outscored teams 250-120 during their win streak before falling last week.

The Rattlers will be looking to bounce back once more and deliver the Patriots’ their first defeat and  hand them their first district loss, which would create a three-way tie atop 31-5A between Sharyland, Mission Veterans, and Laredo Nixon.

“Our coaches and our kids are aware of the circumstances and what’s at stake, but we’re looking first and foremost to punch our ticket into the playoffs and then the goal would be having a share of that district championship,” Adame said. “A win would lock in a playoff spot for us, but the bigger goal is winning that district championship and we can’t reach that goal unless we beat Mission Vets.”

Tonight’s matchup pits the district’s first and third ranked offenses in the Patriots and Rattlers, which could be a recipe for a high-scoring affair.

Mission Veterans quarterback Landry Gilpin continues to put up video game numbers with 1,958 passing yards, 1,245 rushing yards and 37 total touchdowns. In addition to the district’s leading passer and rusher in Landry, the Patriots have two receivers in the top five in yardage in Mikey Garcia and Buda Gonzalez.

The Sharyland offense has been on fire since Longoria’s return, who has thrown for 927 yards and eight touchdowns, good enough for fourth in 31-5A with two fewer games played than other quarterbacks. Longoria has also run for 367 yards and 10 touchdowns, while playmaker and slot back Blake Klein has run for 465 yards and seven scores to go with 32 receptions and four touchdowns.