A week after suffering their first district loss, the Sharyland Rattlers flipped the script and played the role of spoiler, ending Mission Veterans’ perfect season with a 48-42 win in a shootout at Valley View ISD Stadium.

The 48-minute battle came down to the final play of the game as each team rose to the occasion time and time again, but the unit who locked up the victory for the Rattlers was the Sharyland defense. 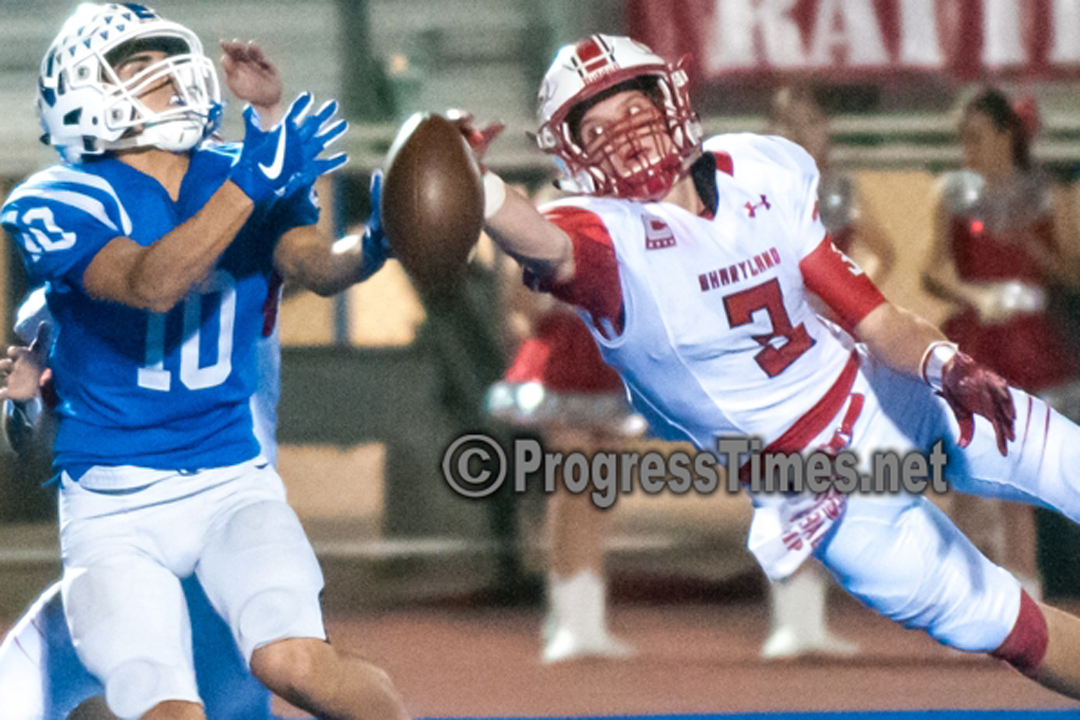 The lethal Patriot offense had seven chances inside the 10-yard line in the final minute of the game trailing by six, and with the help of a pass interference penalty in the end zone, moved the ball to inside the one-yard line. With 4.7 and one final crack at a score, a mishandled snap forced quarterback Landry Gilpin to improvise and try for six, but the Rattler defense swarmed him on the game’s deciding play to stop him short.

“We just knew it was do-or-die; there was no try, there was no attempt, there was just do-or-die, make a stop, we win, don’t and we lose,” said middle linebacker Noe Cortez. “It’s just emotions flowing right now, it’s unbelievable. We had a motto all week and that was ‘shock the world’ and we believe we did that. We just gave it our all each day in practice.”

Sharyland Head Coach Ron Adame said his team was able to pull out the victory due to being tested throughout this season.

“I think tonight we drew from prior experiences,” Adame said. “You look at the Pioneer game two weeks ago and it was a see-saw battle that could have gone either way. Two weeks ago our offense bailed us out, tonight our defense did it, and even on special teams. They had given us everything they had and they were battling all night. Despite obstacles, our boys found a way to persevere and to win, so I’m so proud of my boys.”

The first quarter ended with the teams knotted at seven apiece. That’s when the shootout erupted. In the second, the Rattlers jumped out in front 28-7 after three Edgar Longoria touchdowns. The Patriots battled back to send the game into halftime trailing 28-21 on Landry Gilpin and Daniel Cantu rushing touchdowns.

In the second half, the high-scoring affair continued as Longoria and Gilpin put on spectacular performances with pinpoint accuracy and a refusal to go down when running with the ball. The Rattlers again opened a 20-point margin up 48-28 after Longoria connected with receivers Gabriel Tamez and Ruben Davila on touchdown passes of 46 and 18 yards, in addition to running for another score.

Longoria, who felt he had his best week of practice leading up to the game, said while many doubted the Rattlers could top the Patriots, Sharyland was able to come together to hand Mission Veterans’ their first loss.

“The thing that drove us is we were being honest with ourselves and nobody believed in us and I guess that drove us,” Longoria said. “Since they were undefeated, they were on top of the world; we lost to the team they beat. We had a chip on our shoulder. Everybody bought in and that’s what we love. Just the fact that nobody believed in us, only ourselves, that’s all we need.”

Longoria finished the game with seven touchdowns on the night, two on the ground and five through the air. Landry Gilpin totaled three rushing scores and two passing, connecting with receivers Mikey Garcia and John Aguilar on the touchdowns.

Mission Veterans’ Head Coach David Gilpin wasn’t disappointed in his team’s first loss of the season, but was proud of the fight his team put forth, showing no signs of quit until the final buzzer sounded.

“I couldn’t be prouder of the effort, the no-quit,” David Gilpin said. “We got down 28-7, and then we got down 48-28 and fought back. I’m real proud of the fact that those kids came back. At the end of the day, we fell a little bit short and ran out of time, as they say.”

In the final week of the regular season, Sharyland will travel to take on Rio Grande City, Mission Vets will meet Valley View, and Laredo Nixon is matched up with Laredo Martin, as the three teams will try to close the season with at least a share of the District 31-5A title.