When he’s hanging out with fellow veterans Robert Fisher often wears a brown leather vintage World War II pilot’s flight jacket. Nearly filling up the back of the jacket are 35 white skulls representing each of the bombing missions he flew over Europe during the height of the second world war.

Written across the shoulders above the skulls, spelled out in large capital letters is the word, WOODCHOPPER, a nickname he picked up when he had to take evasive action to avoid a mid-air collision with another aircraft that was coming into the airfield about 2 o’clock from his position as he was taking off for what was to be his twenty-ninth mission, a scheduled bombing run over Kassel, Germany. 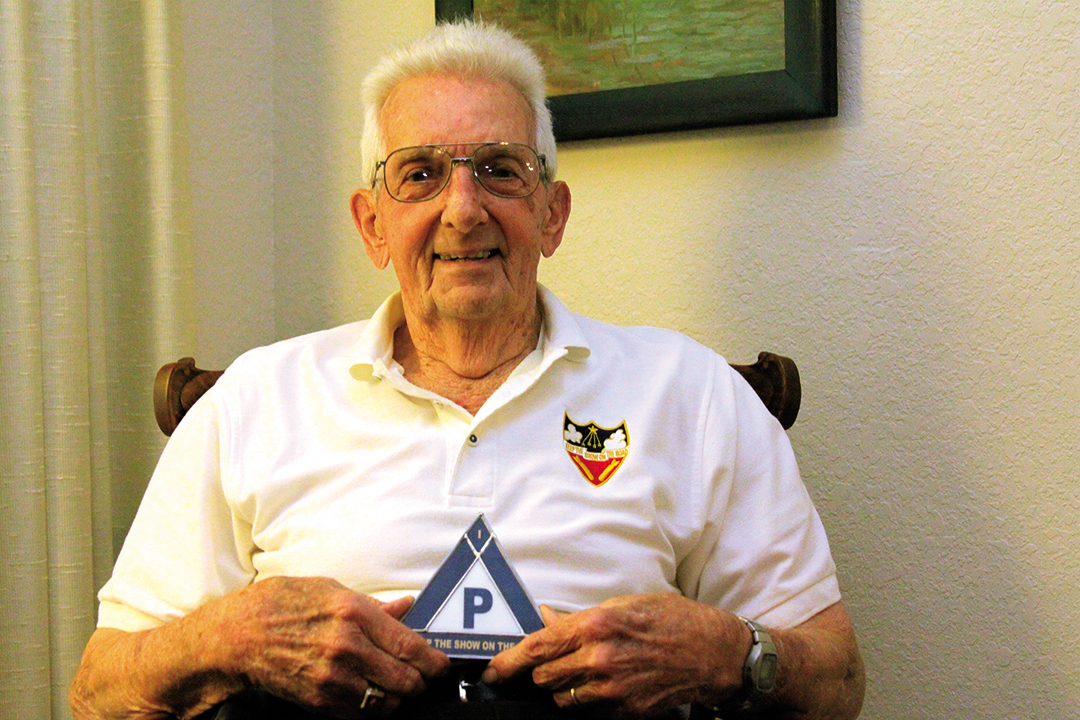 With nowhere to maneuver but down, Fisher’s B-17 bomber hit six tree tops about 20 feet above the ground. The encounter tore the left wing tip while nearly taking off the left wing, badly denting it and bending it back toward the plane’s fuselage. The collision also damaged the cowling from the plane’s number one engine, smashed the plexi-glass nose, bent in the chin turret in the front of the plane and damaged the ball turret underneath the plane. It also tore off two radio antennas on the plane’s belly. This, all according to the 30-page journal Fisher kept detailing his missions.

According to the journal, Fisher was able to pull the plane up despite a damaged left aileron, which controls the front wing, and the left horizontal stabilizer on the tail. After flying out over the North Sea where he dropped his bombs about 30 miles out from land, he was able to make a “relatively smooth landing” back at his airbase near the city of Kettering in central England.

“Technically you shouldn’t be walking around,” Fisher’s journal notes were the first words out of the mouth of a major in the U.S. Army Air Force, a technical inspector who greeted the crew. “How could you fly it back?” were the major’s next words.

Though the crew was fine, Fisher’s journal notes the plane was junked.

Fisher said he won’t be wearing the flight jacket Saturday when he and five other WW II veterans are awarded the medal of Knight in the French Order of the Legion of Honor. The medal will be bestowed by Alexis Andres, consulate general of the French Embassy in Houston, for the veteran’s contributions to the liberation of France during World War II. The ceremony will take place at the state capitol in Austin immediately following the city’s annual Veterans Day parade.

Sitting in his home on Mission’s west side Tuesday afternoon, the silver-haired Fisher, as clear of mind as ever, expressed what the award means to him.

“It’s a great honor,” he said. “These missions evidently were a great help to the liberation of France from the Germans.”

On their first day on their air base in England Fisher said he and his crew received two pieces of bad news, the first was they would have to sleep in tents because there was no longer any quarters on base in the small village called Grafton Underwood north of Kettering. That problem was solved when an entire bomber crew was lost that day and Fisher’s crew took over their quarters.

The other bad news came when Fisher’s crew was told the number of missions required to return home was 35 instead of the 25 required at the war’s start.

“They never expected anyone to finish 25 missions,” Fisher recalled.

Fisher’s first mission was an airfield over the city of La Perthé over German occupied France on Aug. 12, 1944. His last mission was on Feb. 3, 1945, when, noting it would be his last mission; his commander placed his bomber in the most dangerous position at the rear of the 36-plane formation. It was the most dangerous position because German fighters liked to pick off bombers from the outer edges and the rear of formations.

Fisher’s last mission was the first time the U.S. alone sent 1,000 planes over the German capital. Fisher’s journal notes that despite heavy flak over Berlin the weather was “clear as a bell at the target” and he “pulled off a nice landing after a ‘prop wash’ approach, meaning his plane encountered turbulence from the plane landing ahead of him.

During his 35 missions, which often included heavily defended targets in France, Germany, Holland and Belgium, Fisher witnessed two mid-air collisions amongst his fellow pilots, and several other close calls, often caused either by poor visibility from dense cloud cover or because of evasive maneuvers the formations took to avoid flak, the shrapnel created by altitude-detonated exploding shells.

“One of our mottos was, ‘We flew the course as briefed,’ and the other was ‘keep the show on the road,’” the latter, Fisher explained, came from a member of a downed bomber crew whose sentiments were contained in a letter from a German prisoner of war camp.

During his 35 missions Fisher’s bombers lost several engines to German fire. Once he had to put the plane into a dangerous dive to put out an engine fire. 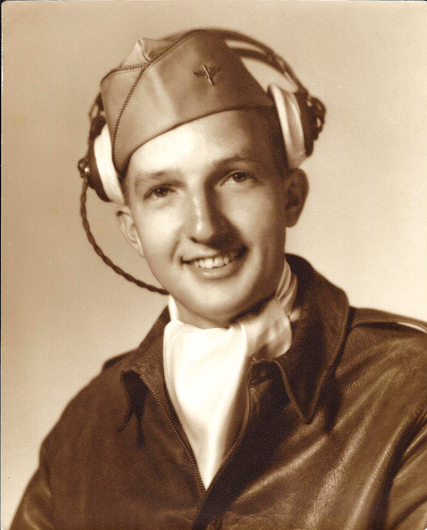 “They once had fire extinguishers for the engines but it was decided they added too much weight to the aircraft,” Fisher said. “Of course the people making those decisions weren’t the ones flying.”

Though 26,000 of the 216,000 air crewman who flew in Europe during the war never returned, Fisher only witnessed one fatality of crewman,  a top turret gunner who died from asphyxiation when, for some undetermined reason, his supplemental oxygen failed to keep the gunner from suffering oxygen deprivation at 28,000 feet. A bombardier was hit in the head by flak and lost his left eye,” Fisher said.

During one mission a piece of flak hit Fisher on his right leg below the knee knocking his leg to the opposite side of the flight control stick located between his legs. And though the flak did not penetrate his heavy flight suit his leg was bruised and swollen from his hip to his foot. He learned in a medical exam more than 60 years later the leg had been broken. Nevertheless, among the many medals and ribbons Fisher has been awarded for his service the Purple Heart was not one of them.

“The doctor said it didn’t break the skin so no Purple Heart for you,” Fisher said.

Born in Baraboo, Wisc., Fisher joined the U.S. Army Air Force at age 20 as a private. He was accepted into flight school and graduated as a second lieutenant.

After the war Fisher attended Ohio State University where he received both his bachelors and masters degrees in physics in just three years.

He retired from the military in 1966 as a lieutenant colonel. Following the war he moved to El Cajon, Calif., where he worked in the Advanced Systems Department of Teledyne Ryan developing unmanned aircraft today known as drones. On his way to California he purchased a 10-acre citrus grove in Mission, which he sold in the early 1980s. Fisher and his late wife, Pauline, who passed away in 2008, eventually retired in Mission after several years of traveling the country in an RV. In between the couple raised four children, of them, Barbara Johnson of McAllen, said her childhood was idyllic, like an episode of “Father Knows Best.”     “The only draw back was when he left town sometimes we didn’t know where dad was going because it was classified,” Johnson said.

Today, looking back at the hardships and dangers he survived during the war, Fisher has this message for so-called Millennial generation, children born since 2000.

“Do everything you can to protect freedom because it’s the most precious thing you can have and well worth fighting for if you get the chance.”