Whether one is in need or just wants a sociable setting there are numerous opportunities in and around Mission to enjoy a free Thanksgiving meal.

Today from 5 to 7:30 p.m. the public is invited to a free Turkey dinner with all the fixings plus desert, music, raffles and games at Dr. Saenz Middle School, 39200 Mile 7 Road in Peñitas. The event is sponsored by the Buckner Family Hope Center and co-sponsored by the Mission Rotary Club. Club president, Lupita Ramirez, said last year’s event attracted approximately 400 people. 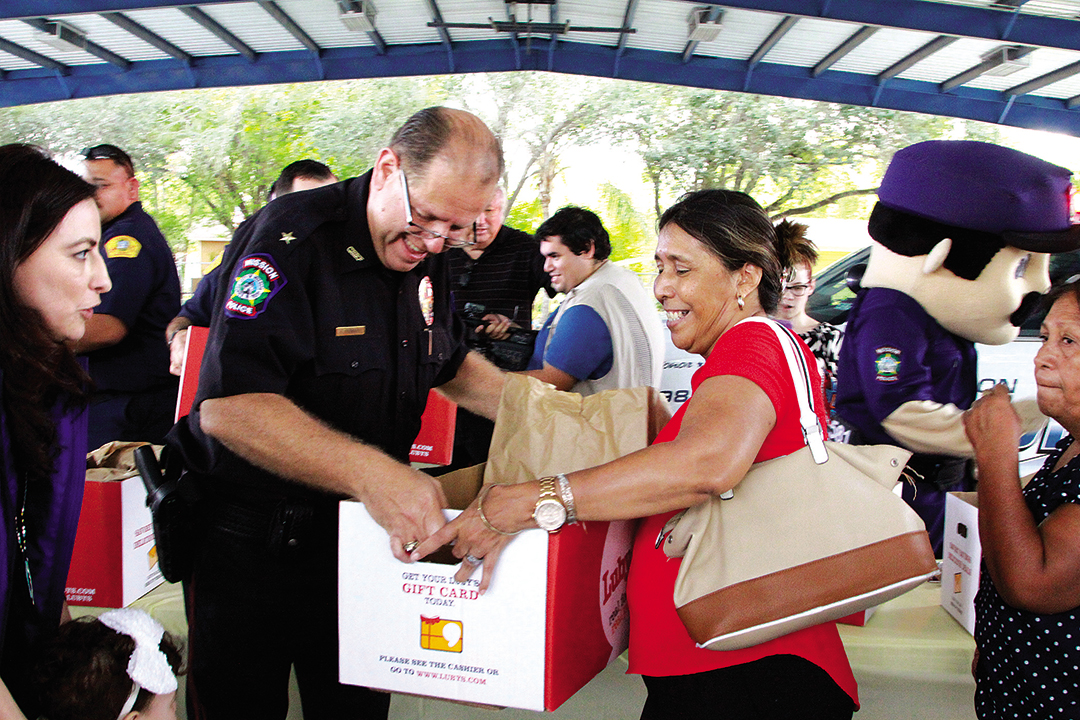 “We wanted to do it differently this year to honor our veterans and providing food for them seemed like the best thing we could do to give them thanks,” Ramirez said.

“A lot of these families were generous in giving their meals to someone else,” she said.

Rotary Club members will meet at the Mission Food Pantry Monday, Nov. 20 to prepare the food packages and will distribute them to families the following morning, Ramirez said.

In Mission the city has taken over hosting what had been a 10-year tradition of offering free Thanksgiving meals by Renee’s of Sharyland restaurant. Mission City Manager Martin Garza said ownership of the restaurant has recently changed hands and the new owners were not going to continue the tradition. So the city plans to offer meals to the public Thanksgiving Day at the city’s Social and Support Center, 115 S. Mayberry Rd., next to the city’s food pantry.

Garza said the city is working with the city’s food pantry, housing authority, adult daycare and other local social service agencies to identify candidates for tickets for free meals. But Garza said no one who shows up without a ticket will be turned away. Meals will be served in a trio of one-hour shifts starting at 11 a.m., noon and 1 p.m.

Garza said the city has budgeted $5,000 for the event but said most of the amount is being donated by participating sponsors including the Mission Rotary Club, the MCISD Foundation, Mission Regional Medical Center, Mission HEROS and H-E-B, among others.

Garza said the city anticipates serving around 700 – 750 people and is also seeking volunteers to help with the event. He said more information can be obtained by contacting Noemi Mungia, the city’s Human Resources Director who is assisting Deputy City Manager Aida Lerma in organizing the event. Mungia can be reached by calling 956-580-8734.

Mission Crime Stoppers is also providing 50 food boxes to deserving persons. Mission Police Chief Robert Dominguez said the boxes containing turkeys and all the fixings will be distributed by Crime Stoppers members on Tuesday. He said the recipients of this year’s boxes were still being determined as of press time but said they are typically persons already receiving some form of public assistance.

McAllen’s Salvation Army is hosting a free meal on Thanksgiving Day at its center at 1600 N. 23rd Street. Sadie Macias, the Salvation Army’s public relations director, said last year the center served 1,430 meals and anticipates a similar number this year. The meals are served in the banquet hall located between the center’s thrift store and emergency shelter. She said the center is seeking volunteers who want to help with the event adding they must be at least junior high school age. Persons interested in volunteering can contact her by calling 956-682-1468. She said the doors open at 10 a.m. with meals served from 11:30 a.m. to 2 p.m. She said the event is open to all members of the public.

The city of La Joya is having its 4th Annual Thanksgiving Dinner Tuesday, Nov. 21 in the La Joya Youth Center, 604 Salomon Chapa, at 6 p.m. City Administrator Mike Alaniz said the city is preparing to feed up to 500 families like they did last year.

“This will be a community-oriented event that is also our way of showing appreciation to the residents of La Joya,” Alaniz said, adding that the event will be catered by a local restaurant.