The Veterans Memorial Patriots (10-1) punched their ticket to the second round of the state playoffs with a 25-17 victory over the Brownsville Lopez Lobos, and they got to do it at Tom Landry Stadium for the first time this year.

Once the stadium started to fill with Patriot fans earlier than usual during warmups, junior quarterback Landry Gilpin said he knew it was going to be a good night in front of the home-crowd. 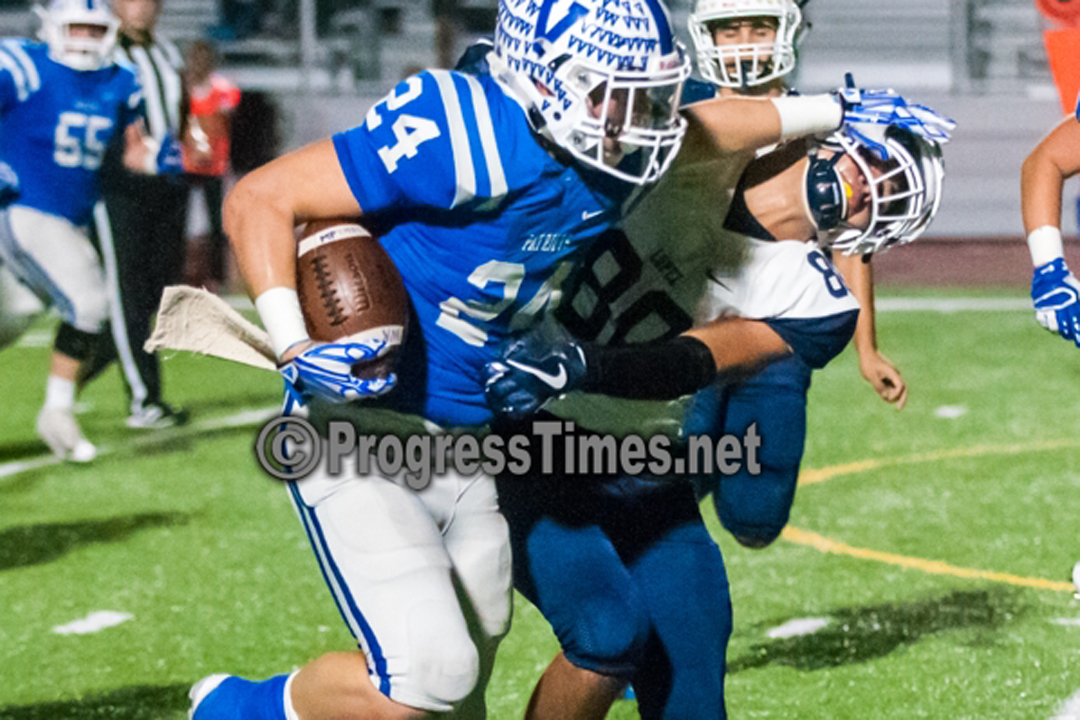 “Just walking in, there was like a presence on the field,” Landry Gilpin said. “There were people showing up early for warmups trying to get their seats early. We knew it was going to be a packed game here and it was an awesome.”

In front of a nearly sold out home-side, defense was on display early as both teams made plays to turnover the opposing offense. After a fumble set up a Lopez field goal, junior quarterback Landry Gilpin hit sophomore receiver Mikey Garcia for the Patriots’ first touchdown. VMHS added a 35-yard field goal from senior Agustin Rodriguez just before the break to push the score to 10-3.

Senior defensive end Abram Martinez said the Patriots defense used the intensity coming from the stands to push them to perform well on the field.

“I was having fun out there,” Martinez said. “I know the defensive side played a hell of a game. They were here and they were hyped, and I know the whole crowd fired us up.”

On the final play before halftime, Lopez received a 15-yard unsportsmanlike conduct penalty, which was enforced at the start of the third quarter.

With Lopez ready to receive the second half kickoff already backed up 15 yards, VMHS Head Coach David Gilpin weighed his options and elected to attempt an onside kick which bounced the Patriots way.

“I turned around and told our special teams coordinator, ‘onside’, and what a great job he did, and what a great job Leo Cantu did to go run down there and pick it up,” David Gilpin said. “Big play, touchdown, boom, all of a sudden we’re off and running, and sometimes you got to jumpstart your team that way.”

After sophomore running back Daniel Cantu dragged defenders down to the 1-yard line, Landry Gilpin powered his way into the end zone on a plunge from inches out to go up 16-3. Landry Gilpin finished the game with 279 yards through the air while Cantu racked up 89 all-purpose yards.

The Patriots defense then stepped up to make a play as middle linebacker Joey Garcia read the Lopez quarterback like a book and broke on the ball, returning the interception for a 40-yard pick six.

The Lobos made a last-second effort to tie the game down eight, but the Patriots’ defense held strong to seal the 25-17 win. The Patriots forced three turnovers total, including recovering two fumbles and the touchdown on the Garcia interception.

“I knew it was going to be this kind of game where we had to pull it out in the end, and we did,” David Gilpin said. “Wins and losses are all that matters in the playoffs. … It’s all about moving on to the next round. We’re in the round of 32 again for the fourth year in a row.”

Mission Veterans is scheduled to take on Flour Bluff in the area-round of the playoffs next Friday at 7:30 p.m. in Flour Bluff.