Teams around the Valley are back to balling and hitting the hardwood with tournaments and non-district action, gearing up for the start of district play in less than two weeks. Here’s a look at the Big 7 Teams on the boys’ side of 31-5A.

Mission Veterans Patriots
Mission Veterans narrowly missed the playoffs last season, and this year’s team has something to prove. The Patriots were voted to finish 8th in District 31-5A by the RGV Basketball Coaches Association when they released their predictions back on Oct. 17. 16th year Patriot Head Coach Romeo De La Garza Jr. believes he has a reloaded group with a chip on their shoulder who will be out to prove doubters wrong.

“We were picked eighth to finish in district play and these guys heard about it, I told them about it and they took it personal,” Coach De La Garza said. “They got a chip on their shoulder and they feel they got a lot to prove. Obviously they’re looking at our youth, but they’re a great group of coachable kids that want to get better every time they step in the gym.” 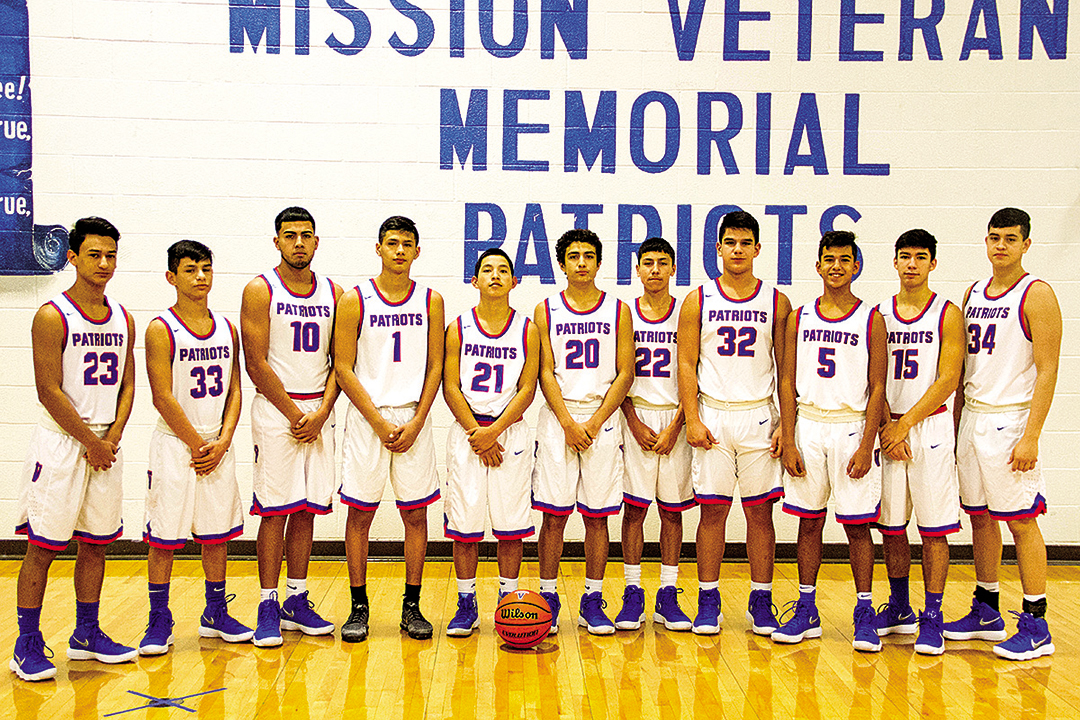 The Patriots are currently 8-3 entering tonight’s matchup with the Harlingen High Cardinals at 7:30 p.m. at Mission Veterans Memorial High School.

This year’s Patriot team returns three players with varsity experience in junior Noe Cantu who is expected to make his return from a collarbone injury soon, and post players Josh Acosta and Elias Ibarra, both seniors.

While Cantu has been out with injury, Elijah De La Garza–Coach Romeo De La Garza’s son–has been running the point and has led the Patriots to a hot start. Once Cantu returns, he will provide another threat on the court and give Coach De La Garza the luxury of playing either off the ball while the other runs the one.

The Patriots are not at full strength yet, but the addition of three football players earlier this week in Acosta, Landry Gilpin and Buda Gonzalez, brings added athleticism to the court for Mission Vets.

Mission Veterans will be looking to make their way back into the postseason this year as the team grows together over the course of the season. Coach De La Garza while the team has come out of the gates hot, his goal is to try and build a successful on court chemistry between his players which will put the Patriots back in the playoff picture.

“Getting the team to understand individually what their roles are, and put those roles together collectively as a unit is what formulates success and that’s what we’re working on right now, even though we’ve gotten off to a good start,” Coach De La Garza said.

Mission Vets begin its District 31-5A slate against Laredo Cigarroa on the road at 7 p.m. on Dec. 12.

Pioneer Diamondbacks
Pioneer was the only Big 7 team in 31-5A to qualify for the postseason a year ago. That Diamondback team was led by nine seniors who are now gone, and with only two returning lettermen, Head Coach Rene Gonzalez is hopeful his youthful group can come together to put Pioneer in the playoff picture once again.

“We’re taking a little different approach because we don’t have too much experience,” Gonzalez said. “They’ve responded really well in practice. They listen, they pay attention, they’re always asking questions and they’re eager to learn, and that’s one thing that’s good about this team this year. They know what they want to do this year.”

The Diamondbacks were 2-2 before taking part in this weekend’s Craig Smith Tournament hosted by Edinburg Vela and Edinburg North high schools from Nov. 30 through Dec. 2. With the district start date of Dec. 12 rapidly approaching, Gonzalez said this year’s Pioneer squad will be depending on the leadership of its two sophomores and two seniors.

The two returners are sophomore big man Lavar Lindo who played in 18 games a freshman a year ago for the Diamondbacks and senior guard Cody Sanchez, who appeared in 14 games. The 6 foot 4 inch Lindo will be tasked with holding down the paint for Pioneer, while guards Luke Padilla, a sophomore, and Geo Garza, a senior, run things up top.

Gonzalez has tested his team early with a non-district schedule and tournament action to prepare them for the grind of 31-5A.

“Our district is once again very tough; if you don’t bring your A-game, you’re going to get beat,” he said. “That’s one thing that we’re trying to do, prepare our team mentally and physically. We played teams that are tough starting with Harlingen South, Nikki Rowe and we’ve played Palmview, then we played Santa Rosa last night. Two tournaments, tried to get them as much experience as we can to get them ready for district and the kids are responding the way we want them to and I like what I see.”

The Diamondbacks will kick off district action against Laredo Nixon at 7 p.m. on Dec. 12 at Pioneer High School.

Moran said the transition from first assistant to head ball coach has been a smooth one thanks to the support of the staff surrounding him.

This year’s Sharyland squad was 5-5 before playing in this weekend’s South San Antonio Tournament from Nov. 30 through Dec. 2. The team also just received a boost in the form of big man Servando Pruneda, who joins the Rattlers on the court now that football season has come to an end.

The junior post will anchor the Rattler team while fellow returner and junior Mauro Fernandez runs the point. Fernandez has size and experience Moran knows can benefit Sharyland, but will need others to step up to play point guard in hopes of moving Fernandez off the ball to produce more offensively.

Moran believes this year’s team has more depth than teams in recent years, with all 10 players able to contribute on the floor. Three seniors, Ernesto Robinson, Brandon McCormick and Max Aguilar, figure to have a role both on and off the court, while sophomore starter Johnny Escamilla is a promising product for Sharyland’s future.

“I see us getting in there and making a push in there, we have a good group of kids and they want to win so we’ll be competitive, that’s for sure,” he said.

Sharyland opens up district play against the Laredo Martin Tigers on the road at 7 p.m. on Dec. 12 in Laredo.