After one game played in the new Tom Landry Hall of Fame Stadium at least one member of Mission Consolidated Independent School District Board of Trustees is calling for a new scoreboard to go with the new stadium.

Trustee Jerry Zamora asked the proposal be placed on the agenda of the board’s Dec. 6 Facilities/Environment Committee meeting. Zamora said there was $1.6 million remaining from the $10 million budgeted for the new stadium that could be used for a new scoreboard. 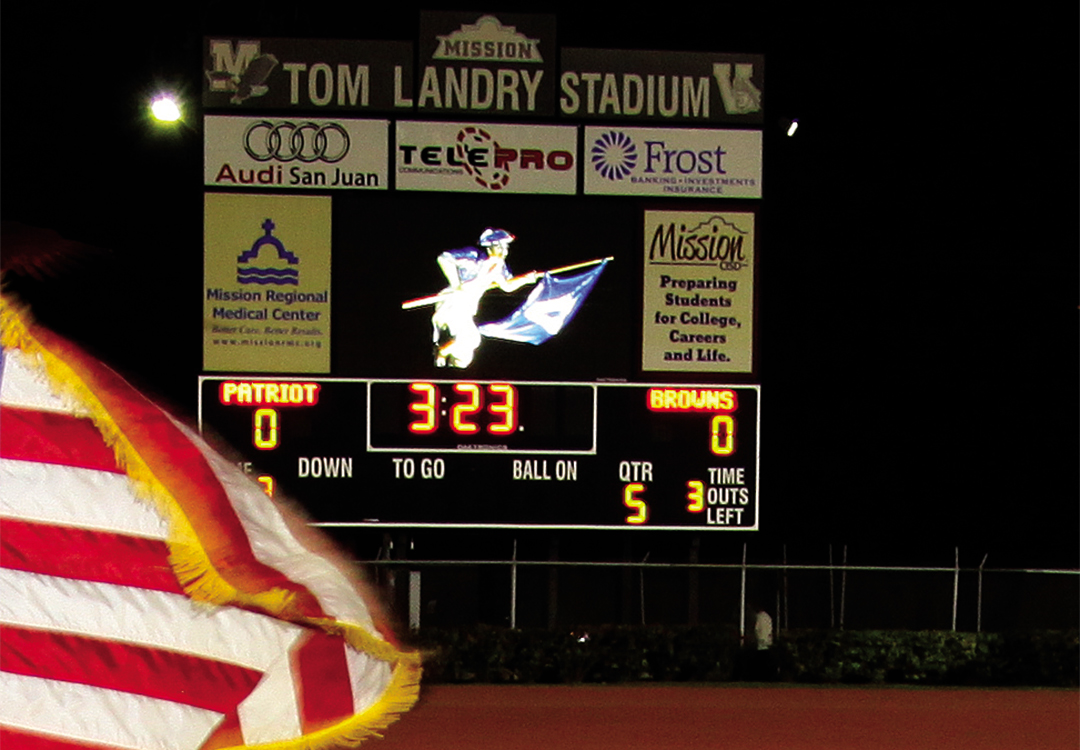 “After McAllen and Pharr [Pharr-San Juan-Alamo High School] constructed their huge scoreboards ours looks kind of minute,&rdquo; said Rick Rivera, the district&rsquo;s assistant superintendent for operations. “And now we have a very nice stadium and field house there&rsquo;s a possibility that we could look into a new scoreboard. The ones at McAllen and PSJA cost one million dollars.&rdquo;

Zamora told fellow board and committee members he was informed by some coaches following the first and only game in the stadium played Nov. 17 it was difficult to read some of the scoreboard data they rely on during the game.

Zamora said the scoreboard could eventually pay for itself through sponsorships.

The Tom Landry scoreboard was constructed in 2010 at a cost of almost $511,000 including its sound system and stadium signs, Rivera said. It&rsquo;s dimensions are 32-feet wide by 27-feet high with a 9 foot by 16 foot video screen. The scoreboard is elevated another 8 feet above ground by steel girders.

“Even if we do it at a million, in my opinion as long as we keep it and have the sponsors end up paying for it, in the long run after we finish paying the million &ndash; or whatever amount we choose for the scoreboard &ndash; it will pay itself off,&rdquo; Zamora said.

Trustee Dr. So&ntilde;ia Trevi&ntilde;o agreed eventually the stadium will need a new scoreboard but she said she wasn&rsquo;t convinced sponsorship could be relied upon to pay for it. She said the sponsors did not materialize as expected after trustees approved the stadium&rsquo;s current half million-dollar scoreboard.

“It&rsquo;s not a priority right now,&rdquo; Trevi&ntilde;o said. “And I think the million dollars could be spent, obviously, on curriculum right now.&rdquo;

But Trevi&ntilde;o said she might be willing to go along with the idea in the future after the district has had a chance to seek out vendors who would be willing to purchase scoreboard sponsorships. She said she doesn&rsquo;t want to repeat the same mistake as occurred when the board agreed to double the size of the six foot tall bronze statue of the stadium&rsquo;s namesake increasing its cost of $50,000 by an additional $79,400. At the time board members were told the statue could pay for itself by selling brick pavers with the names of sponsors but Trevi&ntilde;o said the sponsors thus far have not materialized as the district had hoped. By delaying any decision on a new scoreboard the district would have time to line up prospective sponsors before the scoreboard is purchased.

Interim Superintendent Cris Valdez told board members there are also other considerations in planning a larger scoreboard such as who will produce videos to display on it.

“A lot of the districts that have your upscale, large scoreboards have their local TV stations, like McAllen, you&rsquo;re bigger school districts have those running the scoreboard. So you would have to expand, pretty much, in that area,&rdquo; Valdez said, adding a larger scoreboard would also be more likely to attract larger regional events. “It just depends on what your wishes are. But we can explore that and prioritize what we want to do.&rdquo;

Board members agreed they would not make any immediate decisions on the scoreboard and would revisit the issue at a later date. During Wednesday night&rsquo;s school board meeting Zamora was the lone dissenting vote by the board that approved a $369,000 allocation to install tournament lights on the tennis courts at Mission High School. A similarly priced lighting system was installed at Veterans Memorial High School earlier this year. Board President Patricia O&rsquo;Ca&ntilde;a-Olivarez was absent from the meeting.