Momentum can move mountains, and when the La Joya Lady Coyotes and Mission Lady Eagles met on Tuesday, it was a battle from beginning to end between the two 30-6A playoff hopefuls searching for their first district win.

Both the Lady Coyotes and Lady Eagles entered Tuesday night’s meeting in Neuhaus Gym at Mission High School desperate to get in district the win column for the first time this season. 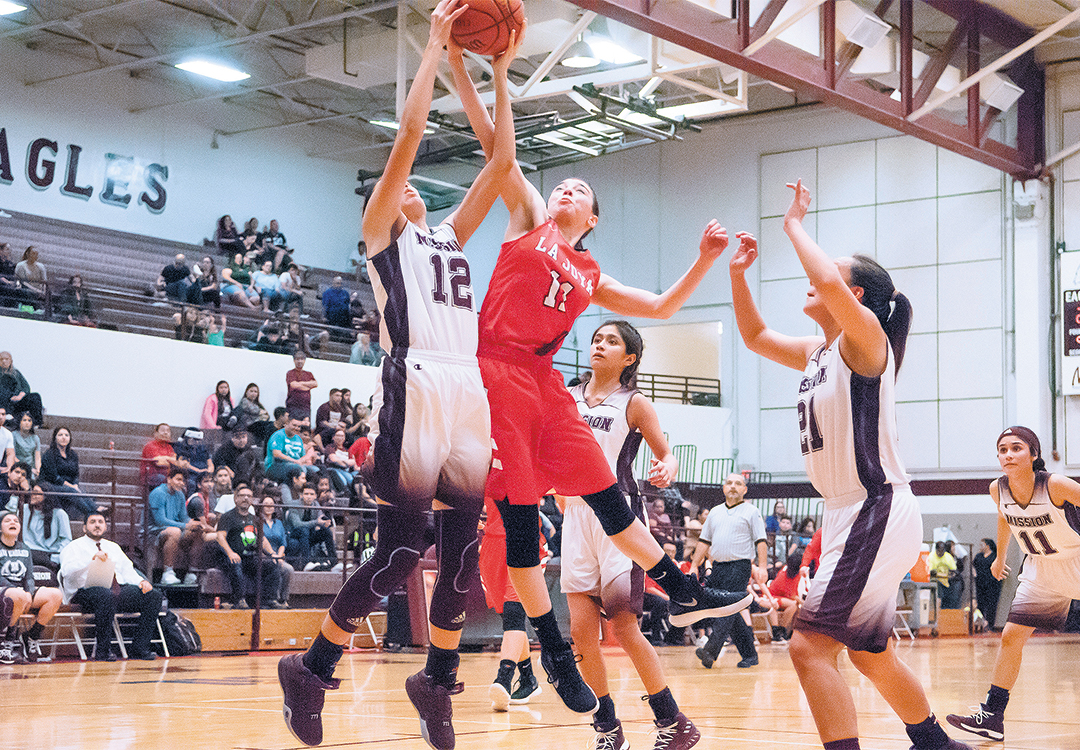 District 30-6A features playoff regulars in the McAllen Memorial Lady Mustangs, the Palmview Lady Lobos and the McAllen High Lady Bulldogs. All three are off to a good start early in district action, and if the trend continues, would leave one playoff spot up for grabs.

Mission and La Joya are both in that group, hungry to become playoff regulars and make a name for themselves on the hardwood.

On Tuesday night, it was the Lady Coyotes who came storming out of the gates, allowing just six points in the opening quarter while dropping 18 of their own. Forward Karina Casanova scored eight points in the first quarter to lead La Joya, while Mission senior Brittney Garza scored all three buckets for the Lady Eagles.

La Joya Head Coach Rene Zamora said he was proud of the defensive effort his team showed on the floor against a scrappy group in the Lady Eagles, who he called the toughest team the Lady Coyotes have faced thus far in terms of hustle.

“The effort, that’s what we try to instill in them,” Zamora said. “It doesn’t matter who we play, how far ahead, how far behind, play and battle until the end. I tell them every loose ball is our ball and that’s what they’ve got to be thinking all the time, and they didn’t disappoint tonight.”

A 30-6A honorable mention for her play last year, Garza, a post, dominated early for the Lady Eagles, but needed help if Mission had hopes of winning the game.

In the second half, the teams went back and forth, fighting for loose balls and hitting the ground making hustle plays. La Joya’s Monica Garcia, who Zamora called the team’s spark-plug, turned things up a notch on both ends of the floor. Whenever the Lady Coyotes need a stop on the defensive end or to control the pace of the game, Garcia is their girl.

The combination of Garcia, Casanova, and guard Jackie Resendez led the way for the Lady Coyotes in the second half, making plays on both ends of the floor. With the Lady Eagles in search of answers, guard Ashley Sanchez stepped up. After briefly exiting the game with an injury, she returned to score seven straight points for Mission to close the quarter trailing 48-41.

The Lady Eagles fought back in the fourth quarter to tie the game at 54 with two minutes to play. That’s when Garcia stepped up for the Lady Coyotes, converting an and-one and scoring on a putback to put La Joya up for good. Casanova drained a pair of free throws which sealed the deal, giving the Lady Coyotes their first district win in a 61-57 battle against the Lady Eagles.

“We’re kind of up and down,” Zamora said. “We’d get those big leads, lost it. I think we were losing a lot of mental focus but you have to give a lot of credit to Mission, they’re scrappy, they get after it. They’re one of the best teams I’ve seen hustling. They had a lot of fight, but then again, we were finally able to finish a close game so I’m proud of my girls; they never quit, the intensity kept going until the end.”

The Lady Coyotes had three scorers in double-figures as Garcia led the way with 22, Casanova with 15, and Resendez with 10 points.

For the Lady Eagles, Garza posted 14 points as Sanchez finished with eight points.

The Lady Coyotes (9-16, 1-2) are set to take on Donna North on Dec. 28 at 1:30 p.m. at Donna North High School and Brownsville Lopez at noon on Dec. 29. The Lady Coyotes will be hunting their second district win on Jan. 2 when they host the McAllen High Bulldogs at 1 p.m.