Known as the “City on the Grow,” Alton lived up to its motto holding a groundbreaking ceremony Tuesday for the Alton branch of Lone Star National Bank, the first standalone bank for the city. And city officials detailed other commercial properties in development.

The Alton branch will be the bank’s 33rd Valley location. The groundbreaking was held on the eve of the bank’s 35th anniversary, said David Deanda Jr., bank president.

“We felt the timing was right for this location,” Deanda said. “We’ve seen a lot of opportunities for the city to grow and we’re looking forward to serving the needs of the community and having a big splash in helping their small businesses.” 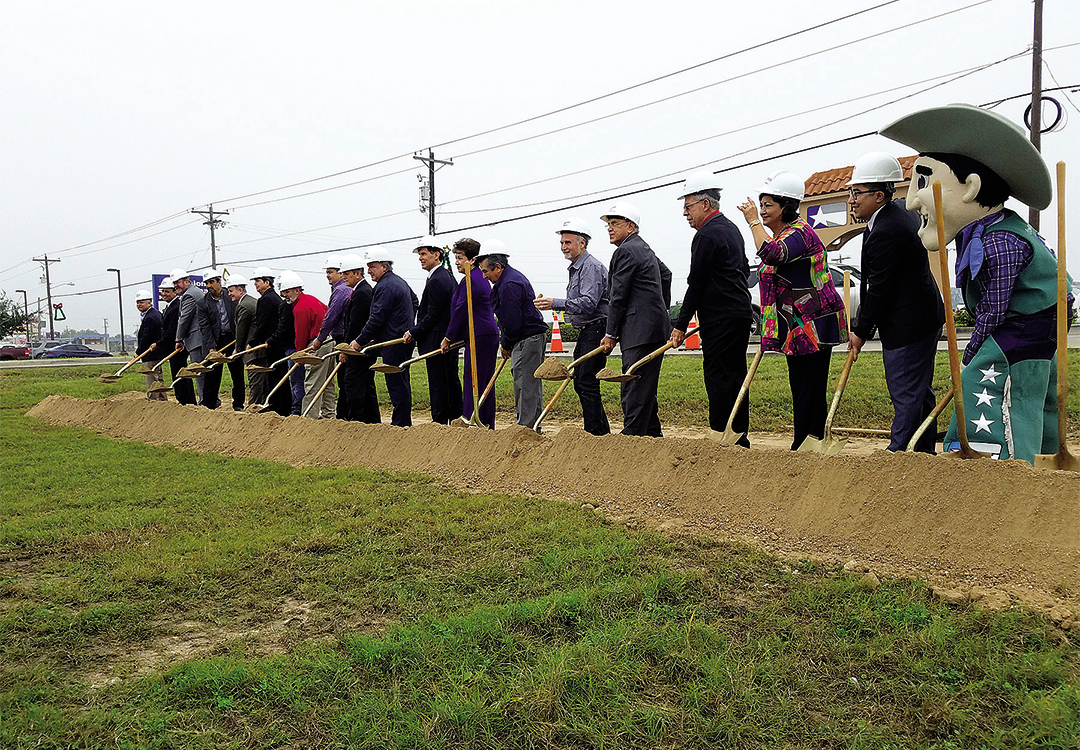 Located adjacent to the city’s fire department at 605 S. Alton Blvd., the bank is scheduled to open in April, Deanda said.

The bank is expected to bring 15 jobs into the city, said Steve Peña, chief executive officer of the city’s Development Corporation. Peña said the groundbreaking occurred three years after the bank purchased the property for $1.5 million.

“We asked the bank a bunch of times to open a location here, sent letters to the president, facilitated a lot of meetings and we’re finally here,” he said. “The only other thing we have to a bank is an ATM from this branch in the same lot and an International Bank of Commerce housed inside our Junior’s supermarket. This was a collaborative effort that we’ve made into a reality.”

At the groundbreaking, Alton Mayor Salvador Vela said the bank will add a sense of legitimacy to the city.

“I’m real happy we’re breaking ground. It’s been three years in the making while the city kept growing in that time,” he said. “It feels like now that there’s a bank the city counts as a major player and the city can enjoy being prosperous. It’s a sign of what’s coming into the city and we’re all elated for the growth.

Urgent Care Center
At the groundbreaking, Vela and Peña said the city is in negotiations with Doctors Hospital at Renaissance to create an urgent care facility next to the bank. Peña said the negotiations could be finalized by early next year so the care center could arrive by late 2018 at the earliest.

“The urgent care center is something that has been in the mix for about a year already,” Peña said. “DHR sees the need that is out here because we don’t have anything like that here. The closest thing we have is Mission Regional Hospital in Mission or DHR in Edinburg and some people cannot make it that far if they’re in an emergency.”

Peña said the city currently has a population of 15,550 residents and could expand by 5,000 residents within two years. He added that the urgent care center could also service colinia residents.

According to Peña, the burger chain invested $300,000 into the city and the new location added 15 jobs.

“Ever since it opened it’s been packed, I guess people love those burgers,” Peña said.

Fire Academy
At a city council meeting held earlier this month, the Alton city council was treated to a tour of the former Alton recycling warehouse, which has been converted into the city’s new fire academy.

Located across the street from the Alton City Hall at 509 S. Alton Blvd., the warehouse went through $600,000 in renovations to make the former warehouse habitable

The work included new plumbing and electrical systems and will have four exam and computer labs and one conference room, said Assistant City Manager Jeff Underwood. The renovations for the building started in June and lasted six months, he said.

The Alton location of the local non-profit La Union del Pueblo Entero will also be housed in the building, Underwood said, adding that a red ribbon cutting ceremony is scheduled for next month to celebrate the academy.