Several Big 7 standouts were recognized for their play on the gridiron as The Monitor released its 2017 All-Area Football Teams and Superlatives. Making the biggest splash on the All-Area awards was the Mission Veterans Memorial Patriots.

Junior quarterback Landry Gilpin was named the All-Area Player of the Year as the signal-caller for the Patriots finished with 3,172 yards and 25 touchdowns through the air and 1,718 yards and 23 touchdowns on the ground. The dual-threat quarterback dominated in his first full-year as the Patriots’ starter with sensational scrambling ability while keeping his eyes downfield. Landry Gilpin, was also named a Texas AP Class 5A All-State honorable mention. 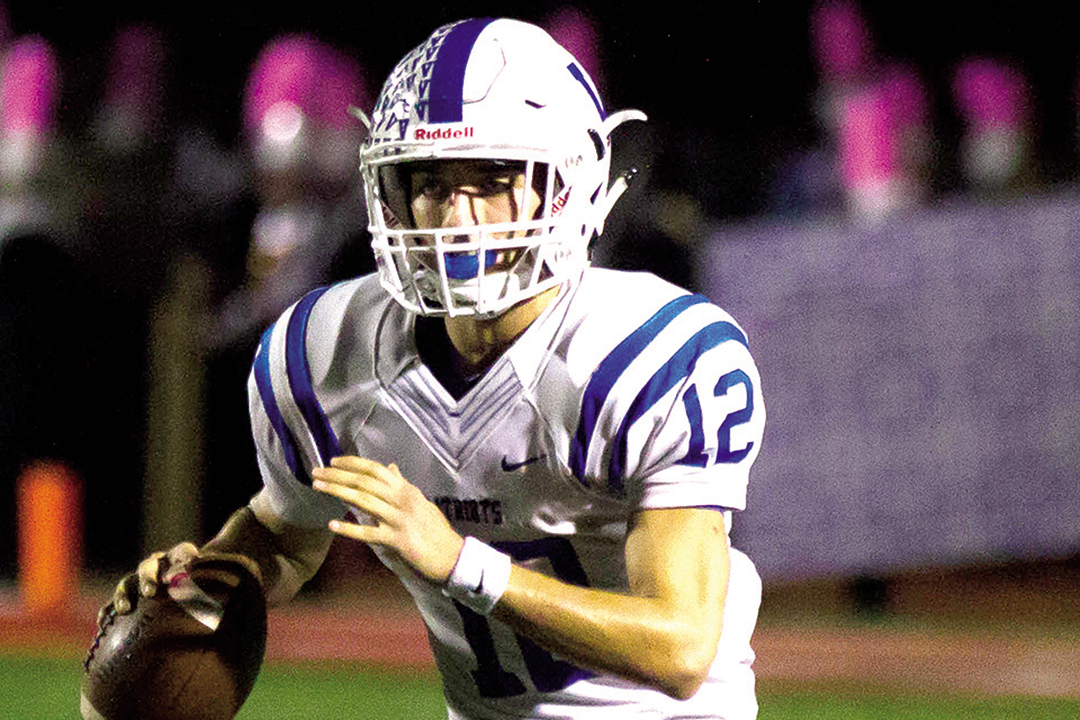 The quarterback was quick to credit his teammates around him for uplifting each other and enabling him to be successful, leading the Patriots to a share of the District 31-5A title.

“It was awesome; I felt it was more of a team accomplishment because of all the work we’ve put in and all the help that I’ve gotten to get there,” he said. “We were predicted to be fourth in the district, barely making the playoffs with a new offense so it’s awesome to be here and get this award with these guys.”

Head Coach David Gilpin said the quarterback is the motor that makes the Mission Veterans Patriots run. “Landry Gilpin is the motor that makes our team run,” Coach Gilpin said of his son. “We have great players. Landry is the guy that has to come and bring it on a daily basis, in practice, in the weight room, in summer conditioning, and Landry embraced that. He understands that as he goes, that’s a lot of the way our team goes, and he has to lead by example. He understands completely that nothing he does can be accomplished without his teammates, without his coaching staff, and he’s very appreciative for the effort they’ve put in that’s enabled him to have the kind of success he’s had. He’s a special high school player.”

On the receiving end of many of the Patriots’ touchdown passes was Mikey Garcia, the All-Area Newcomer of the Year.

Garcia broke onto the scene in his varsity debut in Week 1 against the Harlingen Cardinals, scoring a 79-yard touchdown in the Patriots upset victory on the road. Garcia said that was the moment he knew he was capable of balling on the varsity level. “I really wasn’t expecting much coming in,” he said. “I was taking a spot from Roman De Leon, a great receiver. I was a little bit nervous to fill in a big spot, but ever since I scored that one touchdown against Harlingen, it let me know, hey I can compete at this level.”

Coach Gilpin said that was the launching point which allowed Garcia to step into the role as the Patriots’ number one receiver. “I think that kind of jump-started him to say ‘all these things that these coaches are telling me, everything they’re telling me at home of what I’m capable of’, I think he started to believe it at that point,” he said. “As the season progressed, he started to gain the confidence and understand what a tremendous weapon he is, I think that led him to have the type of season he had.”

The speedy receiver finished with 78 catches for 1,364 yards and 12 touchdowns, establishing a dangerous connection with Landry. The duo’s connection began years ago as kids on the playground at the Boys & Girls Club of Mission, which has now blossomed into a lethal one-two punch for the Patriots.

Senior defensive end Abram Martinez led the Patriots in sacks (6), hurries (20) and forced two fumbles and recovered three on the year. The defensive lineman also finished fourth on the team in tackles. Coach Gilpin called the senior one of the team’s emotional leaders with the passion he brought to the game.

Patriots senior defensive back Giovanni Grimaldo was named to the second team for his play at the safety position. Despite playing in just seven and a half games before suffering a season-ending injury, Grimaldo finished third on the team with 91 tackles and two interceptions. Coach Gilpin said he felt the receiver turned defensive back would’ve been All-State worthy, and will be remembered as one of the most competitive and toughest players to wear the Patriot blue.

The Sharyland Rattlers, who shared the district title with the Patriots, had three players named as All-Area selections. Senior receiver Blake Klein and senior tackle Josh Williams earned first team honors as they led the Rattler offense, while senior kicker Erwin Von Nacher was named to the second team.

The all-purpose threat Klein finished the year with 1,703 yards, including 782 rushing yards and 861 receiving yards on 49 receptions, finding the end zone 15 times in total.

Von Nacher finished 54 of 55 on extra point attempts and 4 of 4 on field goals with a long of 41 yards, scoring 66 total points.

The La Joya Coyotes were represented by a pair of sophomores on the Second Team in running back Eddie Villarreal and guard Alex Rodriguez. Villarreal ran for 1,360 yards and eight touchdowns while Rodriguez cleared the way for the bruising running back, leading the Coyotes to the playoffs for the first time in four years.

Juarez-Lincoln senior safety Elias Gutierrez joined Mission High senior linebacker Esteban De Leon on the All-Area First Team as they each were dominant forces on the defensive side of the ball for the Huskies and Eagles.

Pioneer senior safety Tyler Bulthuis was named to the second team at the defensive back spot. The last line of the Diamondbacks defense, Bulthuis finished with an impressive eight interceptions, 68 tackles, one sack and blocked two field goals.