With the start of a new year comes a lot of reflecting on what the previous year has brought to us.

For us at the Progress Times, 2017 saw a variety of news to bring to you which brings us to this post.

Below is a list of the 20 most popular stories we’ve published this year. All 20 of these stories were selected through a combination of the number of pageviews they’ve received on our site and how they impacted how we covered news this year. Here’s to hoping 2018 brings more excellent coverage from your beloved community newspaper. 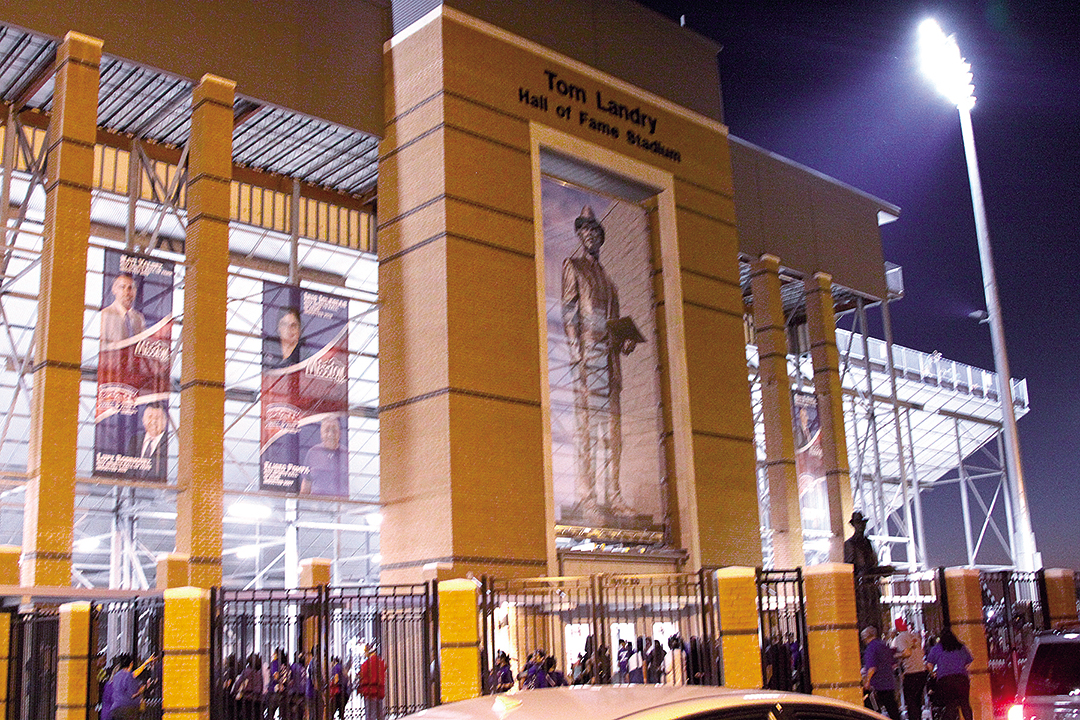 1) Newly remodeled Tom Landry Hall of Fame Stadium (finally) opens
Despite being approved by the Mission Consolidated Independent School District board of trustees on November 2016 and with construction starting last February, rain, school testing days, changes in plans and a hurricane pushed the opening day of the $8 million Tom Landry Hall of Fame Stadium back from its original completion date of Aug. 21. The Nov. 17 playoff game between the VMHS Patriots and Brownsville Lobos was the first and only game played in the stadium last year.

2) NABA lawsuit
Marianna Treviño-Wright, executive director for the National Butterfly Center, encountered a work crew on the butterfly center’s private property who told her they were on orders from U.S. Customs and Border Protection clearing land for the border wall. This led to a national spotlight on the butterfly center as it, along with the Mission La Lomita Chapel and the Santa Ana Wildlife Refuge, became national attractions that could be affected by construction of the border wall.

As a result, the North American Butterfly Association, which owns the center, filed a lawsuit last month against the federal government to prevent them from building the border wall. If the wall is built through the center, the wall would cut off two-thirds of the center’s 100 acres, effectively destroying the Center and leaving behind “a 70-acre no-man’s land between the proposed border wall and the Rio Grande,” the lawsuit stated.

3) Former Agua SUD employees received nearly a half-million in severance pay
A slew of documents released last week revealed that two former employees with the Agua Special Utility District received nearly half a million dollars in severance pay following their termination from the utility district. Oscar “Coach” Salinas and Armin Garza, who currently serve as trustees in the La Joya school board, served as employees with the utility district. Both of them left the district following the passage of a state bill that essentially barred them from working there. Garza, who served as a project manager for the district, received $268,000 while Salinas walked away with $221,000.

4)Mission Regional Medical Center lays off over 120 employees
Less than two weeks after announcing it was being acquired by the California-based health-care foundation Prime Healthcare Foundation, Mission Regional Medical Center terminated the employment of between 120 and 140 employees. That’s according to a source closely connected to the hospital who spoke on condition of anonymity and who was outraged the workers, some of whom had been with the hospital for more than 25 years, were fired without notice on June 2, 2017.

“There is much we can learn from Kika, even with him gone on ahead of us in life’s journey. He was always the humble congressman from South Texas who was dedicated to serving “his people.” He remembered his roots and delighted in helping others,” Brunson wrote of him.

6)Palmview city manager laid off
Following a management review by a consulting firm that concluded the city of Palmview lacked proper policies and procedures and highlighted several departmental deficiencies due the inexperience of its city manager, the city of Palmview placed their City Manager, Ramon Segovia, on administrative leave last April and ultimately fired him the following June. The city appointed former Weslaco City Manager Leonardo Olivares to replace him.
Segovia filed a lawsuit against the city the following month seeking between $100,000 and $200,000 in compensation. The lawsuit is still pending according to court records.

7)MCISD’S superintendent departing
In October, or eight months after MCISD trustees extended his contract by two years and gave him a $15,000 a year pay raise bringing his current salary to about $240,000, MCISD Superintendent Ricardo López announced he would step down from his position after being named the “lone finalist” to become superintendent for the Dallas-based Garland Independent School District. His last day with the district was Dec. 22, the last day of the fall semester. He started his new job Monday.

8) Snow in the Valley
Not since Christmas 2004 have Mission residents experienced snowfall. On Friday, Dec. 8 snow fell from just before sunrise to about mid-morning in a band of snow that, according to National Weather Service charts, spanned from the tip of Texas to North Carolina. The charts indicated Mission received less than an inch of snow accumulation. And by early afternoon there was nary a sign it had fallen here.

Mayor Ramiro Rodriguez and City Planner Lupe Garcia outlined plans for the park located adjacent to the iconic Shary Memorial Chapel. The project will be done in phases and could take several years to complete, as the city tries to complete the work as budget funds become available. The city celebrated the end of phase one of the project, which widened the entrance of the park and added a parking lot, by hosting a Christmas tree lighting ceremony last month.

10)Alton living up to its motto with new developments
Known as the “City on the Grow,” Alton lived up to its motto holding a groundbreaking ceremony last month for the Alton branch of Lone Star National Bank, the first standalone bank for the city that will open in April.

Other developments in the city included a new fire academy, a Stars Drive In that is now open, and an urgent care center the city is finalizing details on with Doctors Hospital at Renaissance.

11)Mission police sergeant resigns following viral Facebook post
Within a week after being suspended following a viral video that showed him under the influence, longtime Mission Police SGT. Manuel Casas resigned from his position last June.

12) La Joya approves smoke-free ordinance
Last June, the city of La Joya adopted a citywide smoking ordinance that banned smoking indoors in public places, similar to one passed in the city of Mission in June 2016

14) Two area cities join opposition to SB 4
The city of La Joya became the first in the Rio Grande Valley to join other cities around the state in a lawsuit against a senate bill that would ban so-called sanctuary cities last June. The city of Palmview joined them later that day.
Senate Bill 4 aims to outlaw local governments that don’t enforce immigration laws by requiring local police officers to cooperate with federal immigration authorities and allowing police to inquire about the immigration status of people they lawfully detain. Under SB 4, local authorities are forbidden from adopting policies that prevent a peace officer from asking about a person’s immigration status.

15) Silver anniversary; Peñitas mayors recall the city’s 25 years of growth
In honor of their 25th anniversary, the five previous and current mayors of the city of Peñitas met to discuss how the city has grown since it was first incorporated into a city in 1992.

16) Cruz talks border security, economy, with local leaders
During a February visit to the Mission’s Center for Education and Economic Development building, Republican U.S. Sen. Ted Cruz met with local leaders as a group of 40 protesters rallied outside the building to protest the border wall

As athletic coordinator, Canchola oversees all the athletic programs for Domingo Treviño Middle School, she said. Previously, Canchola served as a girl’s track, basketball, cross-country and volleyball coach throughout the school district for the last 27 years before becoming the head of the girl’s athletics program for Domingo Treviño when the school opened in 2011.

19) Mission moving to create animal adoption center
Support and action are both increasing for the City of Mission to create its own Animal Shelter/Adoption Center he City of Mission declined to renew their contract for service with the Palm Valley Animal Center in Edinburg. The city recently created a Facebook Page called Mission Pawsible, where photos of animals that are up for adoption can be found.

“The ultimate goal is to have an air-conditioned brick and mortar building that will house our animals,” Mission City Manager Martin Garza said.