Juarez-Lincoln (17-8, 2-2) is off to its best start in school history. With 17 victories under their belt, this Huskies team has already set a record for victories this season, more than any other in the nine years of the program’s existence.

While the Huskies could say this season has been a success due to that fact, this group is chasing bigger goals. 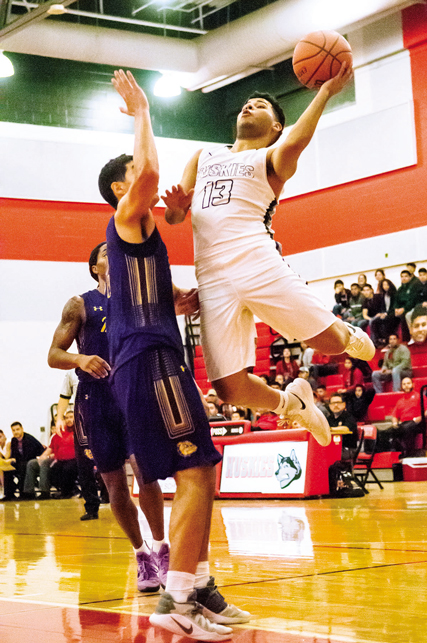 Juarez-Lincoln has never made the playoffs since opening its doors 10 years ago. Head Coach Albert Carillo, who is in his third year with the Huskies, has his senior-laden team focused on putting an end to that streak and bringing a city championship to Juarez-Lincoln High School for the first time.

“They put in a lot of work and that’s one of the goals that we want to accomplish,” Carillo said. “That’s still in grasp so hopefully we can get in.”

One of the main reasons Juarez-Lincoln has turned things around this season is the contributions of a strong senior group. All five starters and the sixth man are all in their final year for the Huskies and have built chemistry growing up together while playing alongside each other.

The Huskies starters are Cruz Mendoza, Luis Garza, Andre Suarez, J.R. Galvan and Juan Martinez, while Eduardo Torres is the sixth and final senior on the team, serves as a three-point threat as the first man off the bench.

Mendoza, the team’s point guard, said former Huskies who once suited up on the hardwood for Juarez-Lincoln have given the group confidence to be the ones to finally put the program in the postseason.

“We really want to make it happen,” Mendoza said. “The veterans that used to come here to Juarez believe in us and we want to make that happen.”

Scoring not an issue for this team every player on the floor isn’t shy to pull the trigger from deep.

Mendoza is the Huskies’ leading assist man and second leading scorer as the lefty is averaging 12 points, 5.5 rebounds, 5.8 assists and 1.6 steals per game. His smooth playing style with the ball in his hand and ability to find open teammates from odd angles allows him to lead the Juarez-Lincoln attack.

Garza is the team’s leading scorer and rebounder, as the big man is averaging 16.9 points, 12.3 rebounds and nearly two steals per game. While some big men may shy away from shooting from distance, Garza has no problem doing so with his knockdown ability from range.

Through four district games, the Huskies sit st 2-2 and right in the middle of the race for one of the final playoff spots in 30-6A. The Huskies dropped their district opener to Rowe 54-46 on the road, but followed that up with two wins over Palmview (74-27) and Mission (67-64).

Carillo said while the chemistry between his team is good, the Huskies are still not where they want to be. The third year head coach said giving up nearly 70 points per game isn’t going to win you many ball games, especially when each game is critical in the seven team district of 30-6A.

“The intensity was good, but I think defensively we struggled today,” Carillo said after the Huskies loss to the Bulldogs Tuesday night. “We shot the ball well and we continued to shoot the ball well here. I know we struggled in the fourth quarter here to get some buckets, but those first two games we had more intensity and I think defensively we were better, so we’re going to go back to work on defense.”

Next up for Juarez-Lincoln is a rivalry game against La Joya, another squad who is competing with the Huskies for a playoff spot and a city championship.

La Joya (11-15, 2-1) is coming off a 44-38 upset victory on the road over McAllen Memorial, as the Coyotes handed the Mustangs their first district loss.

A year ago, the Coyotes swept the season series against the Huskies, winning 48-41 and 79-74. Now, it will be the Huskies looking to make their mark in the city of La Joya.

Mendoza said the Huskies will be ready for the game as the two schools battle for a city championship.

“We’re really looking forward to it,” he said. “We’re going to get after it in practice and we’re going to be ready for that game.”

The Huskies and the Coyotes are set for their rivalry game at 7:30 tonight at La Joya High School as the two battle to climb up the 30-6A standings.