When Ben Cavazos opened MAE Power Equipment in 1954, he had no idea his business would be standing today.

Cavzaos opened the business when he was 24 years old. He got started with a $4,000 loan and rented a 900-square foot building, he said. 64 years later, the shop is a multi-million power equipment dealership that occupies a two-building facility totaling 12,000 square feet with 360 customers, he said.

On Tuesday, the company was awarded with a $20,000 small business grant by the financial services company, Synchrony Financial. The small business grant award was given to 10 small businesses who won an essay writing contest where business owners must answer how they would improve their business with $10,000 and how they planned to make a difference in their community with an additional $10,000.

Cavazos’ business, MAE, chose to donate the additional $10,000 to the Mission Boys and Girls Club for new computer equipment and software.

Jen Robinson, a spokeswoman for Synchrony Financial, said MAE was the only business in the Valley to be awarded this grant. A total of 1,500 businesses across the country applied to the contest. 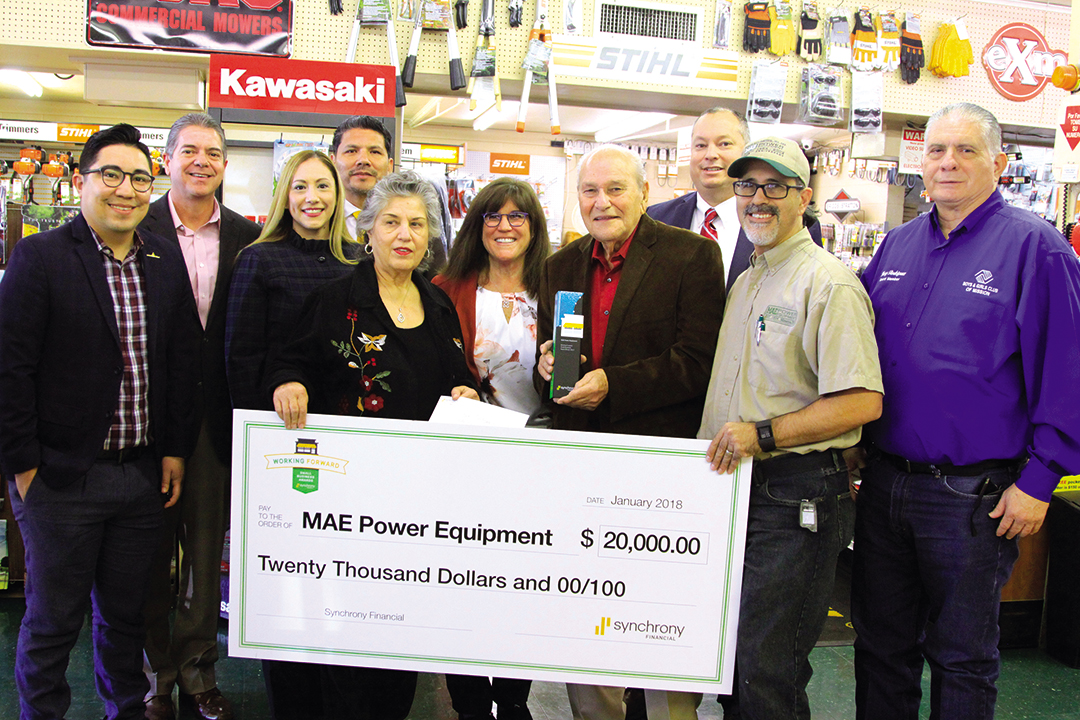 “[Cavazos&rsquo;] ability to operate a small business for so long and impact so many came through very clearly in his essay,&rdquo; Robinson said. “MAE has evolved with the times without losing sight of who they are. They&rsquo;ve grown from a small space into this huge footprint. It&rsquo;s impressive to see a small business survive for so long.

In his essay, co-written by Cavazos, his son Oscar and a family friend, Cavazos wrote on his business competing with competition from mass merchants such as Home Depot and Lowes. He expressed a desire to use his portion of the grant to purchase a working van and a 25-foot trailer to visit customers and train them on-site with their newly purchased equipment.

“This award is important because small businesses are the cornerstone of communities and it&rsquo;s the majority of our business,&rdquo; Robinson said. “When they&rsquo;re successful, we&rsquo;re successful. This contest acknowledges that.&rdquo;

This was the second year the company held this competition, Robinson said.

For Cavazos, 87, it was a no brainer to donate $10,000 to the Mission Boys and Girls Club as he had been involved in the club since its inception 30 years ago when he helped in sponsoring the location to be built.

“If I live in this community, why wouldn&rsquo;t I want to help to make it better?&rdquo; Cavazos said, adding that he served on the board of directors for Mission Regional Medical Center for nearly 20 years and his business was the first one to join the Greater Mission Chamber of Commerce.

“The Boys and Girls Club is something that has always been close to me, I know how kids need a place to go to after school, we decided to use the money for the club&rsquo;s technology department after talking to them and finding out their computers were outdated.&rdquo;

Juan Arevalo, director of the Mission Boys and Girls Club, called the donation a blessing that will help the organization buy 15 new computers for the club.

“This donation shows Cavazos is a great advocate for our youth,&rdquo; Arevalo said. “We are going to put that funding to good use. $10,000 may not seem like much but when you serve a lot of people, that amount just for computers will make an impact.&rdquo;