Last week we looked at how the Big 7 girls’ basketball teams were doing against their 30-6A and 31-5A competition thus far this season. This week we’re looking at the boys’ teams. While two of the girls’ teams are in the thick of their respective playoff and district championship races, the boys aren’t doing quite as well; especially in District 31-5A which we’ll look at first.

District 31-5A
Last year the Pioneer Diamondbacks were the only boys’ 31-5A Big 7 team to qualify for the playoffs. They posted a 10-6 record which was good enough for third place behind Laredo Martin (16-0) and Laredo Nixon (12-4). In the playoffs the Diamondbacks defeated Mercedes (75-73) in overtime in the bi-district round but lost a close one to Corpus Christi Moody (60-54) in the area round. 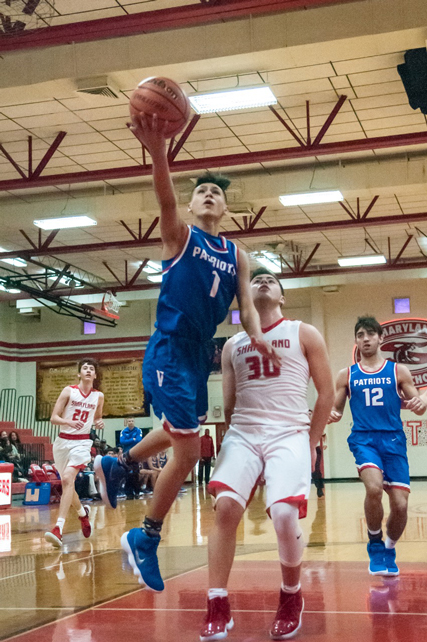 So far this season it’s Laredo Nixon that is undefeated with an 8-0 record while Laredo Martin and Laredo Cigarroa are tied for second at 6-2. Roma and Rio Grande City are tied for fourth with 4-4 records. That leaves the three Big 7 teams and Valley View occupying the bottom four spots.

Of the three Big 7 teams, the Diamondbacks and the Mission Veterans Patriots are faring the best with identical 3-5 district records. That has them tied for sixth place one game behind Roma and Rio Grande City. As for the Sharyland Rattlers, they are currently tied with Valley View for eighth place with 1-7 records.

While it’s not too late for the Diamondbacks and/or the Patriots to make a run at one of the district’s four highly coveted playoff spots, they cannot afford to repeat their first round performances. With it looking more and more as if three of the four spots will go to the three Laredo teams, that will leave only one spot for the remaining six teams.

Realistically however, the final playoff spot will go to one of the four teams currently tied for either fourth or sixth place; Roma, Rio Grande, Mission Veterans and Sharyland Pioneer. While that does lower the odds a bit for the Patriots and the Diamondbacks, it will take quite a finish for either of those teams to extend their season into the playoffs.

District 30-6A
The La Joya Coyotes were the only Big 7 30-6A boys’ team to qualify for the playoffs last year. They did so by posting an 8-4 record. That was good enough for them to finish the regular season in a three-way tie for second place with McAllen Memorial and McAllen High. Nikki Rowe claimed the district championship with a 10-2 record.

So far this season, the 2-3 Coyotes are in fifth place, half a game behind fourth place Juarez-Lincoln.  The fact that they are in fifth place means that, in regards to the playoffs, they do not control their own destiny. As a result, Coyotes’ head coach Eric Montalvo knows that the road leading to a return trip to the playoffs for his team will be an uphill one.

“For us to make the playoffs, we will have to show a lot of toughness and maturity as the district games move forward,” Montalvo said. “I tell the kids that district is like a boxing match, sometimes a boxer doesn’t win all the rounds but if he wins enough he will win the match. I feel that if we show toughness, desire and great belief in each other we can win our match and return to the playoffs.”

The only Big 7 boys’ team that is currently occupying one of the four top spots in either 31-5A or 30-6A is the Juarez-Lincoln Huskies. Through Tuesday’s games the Huskies are 3-3 (15-9 overall) which has them two-and-a-half games behind the first place Nikki Rowe Warriors (5-0), one-and-half games behind the second place McAllen Memorial Mustangs (4-1) and half a game behind the third place McAllen High Bulldogs (3-2). Coming off a 2-10 2016-2017 season, the Huskies are doing well to be at 3-3, but their triple overtime loss to Memorial Tuesday night did drop them from third place to fourth place.

Going into tonight’s games, the other two Big 7 boys’ teams, Palmview and Mission High, find themselves occupying the bottom two spots in the district. The 1-4 Lobos are in sixth place while the 0-5 Eagles are in seventh place.

Tonight, the Huskies have a bye, the Coyotes will be hosting the Palmview Lobos and the Eagles will be on the road against the McAllen High Bulldogs.