The Lady Lobos entered the year with hopes of bringing home a district championship to Palmview High School.

With just over half of district play behind them, Palmview’s (18-12, 5-2) chances of accomplishing that goal became more difficult after the Lady Lobos lost their second game in district play Tuesday night to the McAllen High Lady Bulldogs 39-31, falling two games behind 30-6A leader, the McAllen Memorial Lady Mustangs. 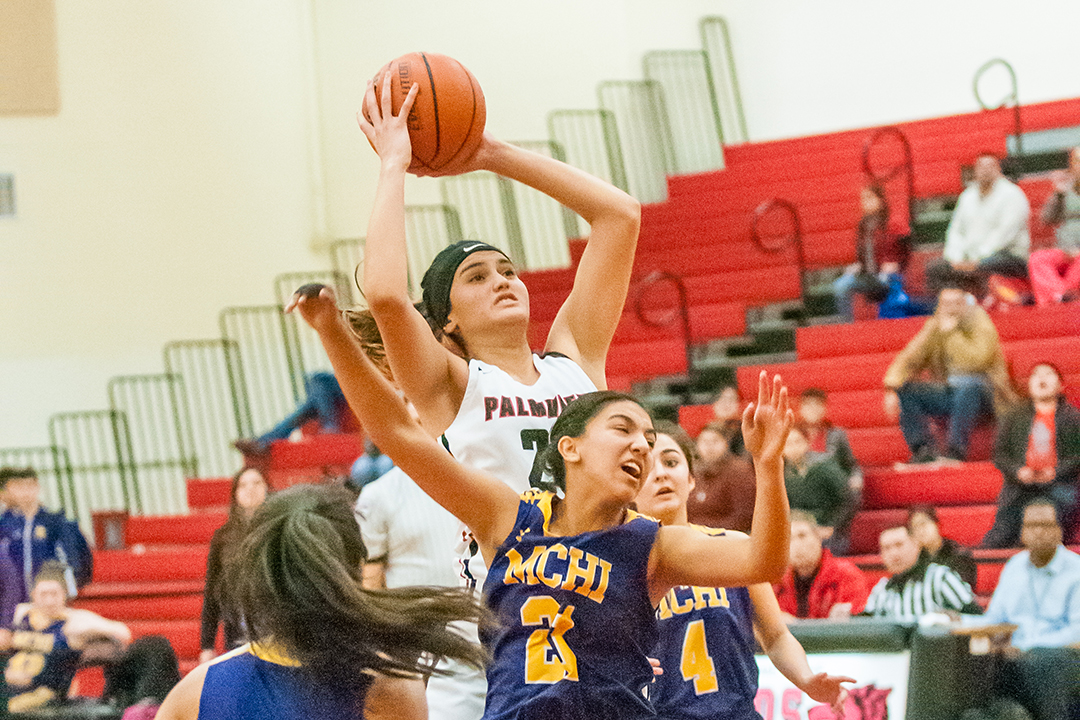 Maybe it was due to the bitter winter weather that hit on Tuesday, both teams started cold from the floor as the Lady Lobos and Bulldogs struggled with their shots early. The two went into halftime with McHi leading the way 16-15.

In the second half, the Lady Bulldogs pulled away as they swarmed Palmview senior post Cyndar Magallon with double teams all night, causing deflections on entry passes, forcing turnovers that often resulted in easy McHi buckets. McHi made a concentrated effort to prevent the 6-foot-1 center from a dominant performance. Magallon entered the game averaging a double-double in points and rebounds, while averaging over four blocks per game, an impressive number when you realize most players struggle to average even one block per game.

Palmview didn’t get much going on the offensive end as they shot just 1 for 9 from three-point range. Junior guard Renee Flores led the Lady Lobos with 12 points, while Magallon finished the game with seven points, 10 rebounds and four blocks.

Palmview Head Coach Anisa Reyna said her team’s performance was sub-par in the loss to McHi as the Lady Lobos weren’t able to establish a groove throughout the course of four quarters.

“We like to open it up and go inside-outside first, but (Cyndar) was getting double-teamed inside so we had to find a way to counter and hit a shot, but unfortunately we were 1-for-9 on the three-point shot tonight,” Reyna said. “A team like that was coming out very aggressive on us and we didn’t do the things we needed to get it done tonight.”

After the Lady Lobos suffered their first district defeat, Head Coach Anisa Reyna’s team ripped off four straight wins, knocking off McHi, Juarez-Lincoln, Nikki Rowe and Mission. While Palmview has an outside shot of claiming a district title, they are in solid position to bounce back and make another run as the postseason approaches.

Their first opportunity to do so is tonight in a matchup with their sister-school, the La Joya Lady Coyotes. Reyna isn’t focused on a city championship, but looking to put the Lady Lobos back on the right track.

“It’s not about the rivalry, we just want to bounce back, period,” she said. “We need more execution down the stretch, in clutch situations–perform, execute. Whether it’s hitting the open woman in the post, popping it right back out, but hitting our three-point shot is the most important thing going forward. All we’re asking is they hit 1-of-3.”

The Lady Lobos are led by the inside-outside combination of Magallon and Flores. The two together give Palmview one of the most dynamic duos in the Valley with their size, skill and scoring ability. The pair, along with senior guard Brittany Cano and junior post Krystal Bocanegra, will be relied on to be consistent night in and night out with just five district games remaining.

The last time the Lady Lobos and Lady Coyotes (10-22, 1-6) met, it was Palmview who walked away with a decisive 45-32 victory on their homecourt. Now, the Lady Lobos will have to take their game on the road as they ready for La Joya Friday night at 6 p.m.

After the inner-city showdown, the Lady Lobos face their biggest test of the year in a game they must win if they’d like a share of the district title, a matchup with McAllen Memorial, who is unbeaten in 30-6A action.

Palmview will tip-off against the Lady Mustangs in a must-win if the Lady Lobos hope to keep their district championship dreams alive at 6 p.m. Tuesday at McAllen Memorial High School.