The Peñitas Police Department made Gonzalez, the city fire marshal, a full-fledged peace officer on Dec. 7, according to Texas Commission on Law Enforcement records. 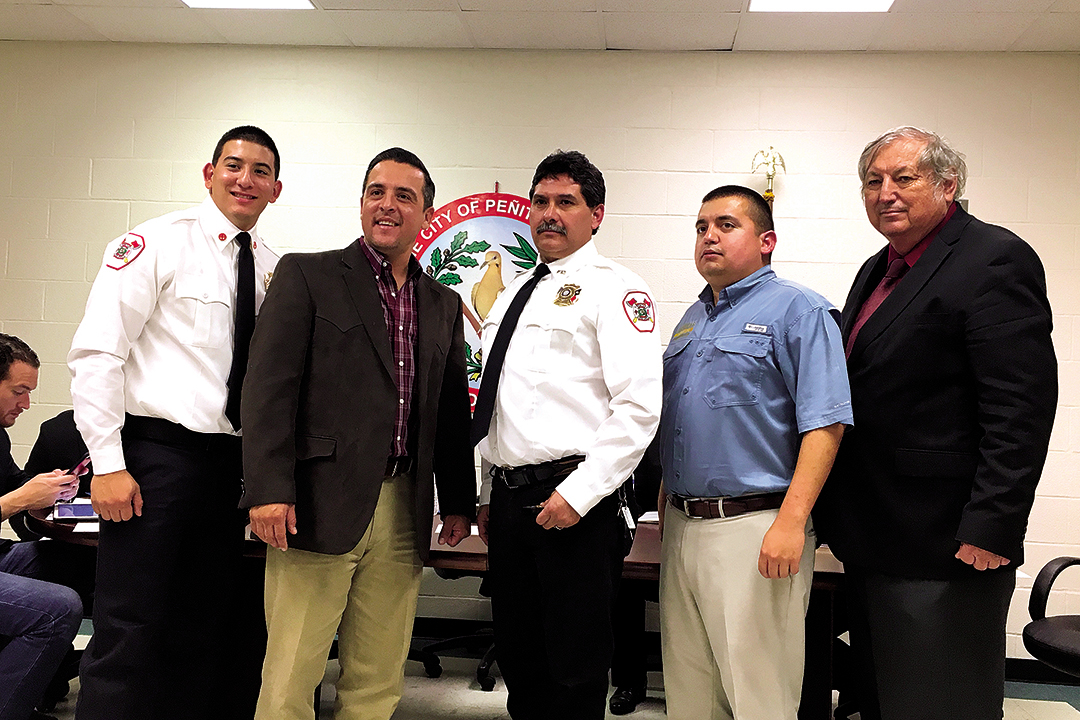 “In my view, something that happened over five years ago — he has been an exemplary employee and a public servant,” Romero said, referencing the drug test results.

“If I saw anything that concerned me or had any kind of warning sign, I would probably discuss it with him. However, he has never caused me to have any kind of concern to where I feel it is necessary for me to go and dig up his past.”

Armed with a solid high school transcript, he enrolled at the University of Texas-Pan American to study police administration, according to personnel records. Gonzalez, though, struggled with college coursework.

He left without a degree. Rather than study police work, Gonzalez would learn on the job.

A Mission-based company hired Gonzalez to provide private security at weddings, parties and nightclubs, according to personnel records. He didn’t stay long.

Gonzalez took a dispatcher position at the La Joya Police Department in May 1992, according to personnel records. Less than a year later, Gonzalez earned a promotion to police officer.

He left La Joya for Hidalgo, which had a bigger police department and higher pay, during February 1996.

“I was a patrol sergeant and he was a patrol officer,” said Peñitas police Chief Roel Bermea, who also made  the move from La Joya to Hidalgo during the 1990s. “We were both patrol.”

Bermea said he worked well with Gonzalez and never had any problems with him.

Gonzalez left Hidalgo for the Mission Police Department, which hired him in November 1998.

After serving as a resource officer at local schools, Gonzalez moved to patrol and eventually became an evidence technician, according to personnel records, which don’t show any disciplinary action against him.

Gonzalez also became involved in local politics, winning a seat on the Peñitas Board of Aldermen — what’s now the City Council — with support from Mayor Marcos Ochoa.

In June 2012, though, a minor car crash upended Gonzalez’s career. City policy required him to take a drug test.

Gonzalez tested positive for cocaine on June 25, according to records released under the Texas Public Information Act. The drug test found a metabolite called benzoylecgonine, which remains in the body after exposure to cocaine.

He resigned on July 3.

Gonzalez also quit the Peñitas Board of Aldermen on Sept. 21.

The drug test had cost Gonzalez his job and political career.

A SECOND CHANCE
After resigning from the police department, Gonzalez took carpentry and pipe fitting jobs in Houston and Port Arthur, according to personnel records.

He found work closer to home during December 2014, when Peñitas hired him.

Gonzalez started handling code enforcement and animal control for the city. The job paid just $12 per hour — barely more than his starting salary at the Mission Police Department roughly 16 years ago.

“I’m halfway through my third year as city manager and I’ve never had any concerns,” Romero said about Gonzalez. “He’s always been on the up-and-up.”

The volunteer position didn’t come with any compensation. Peñitas also didn’t make Gonzalez a law enforcement officer, which is standard for fire marshals in Texas.

“We’re behind Mr. Gonzalez 100 percent,” Lopez said in January 2017 after appointing Gonzalez fire marshal. “As far as what he did over there, I am not aware of it — and have no interest to be aware of it.”

Romero said he didn’t review the drug test results or ask Gonzalez about the incident before Peñitas made him a full-fledged law enforcement officer.

“As far as I’m concerned, that test and its validity have nothing to do with Mr. Gonzalez’s service to the city,” Romero said.