When Jennifer Ruiz-Longoria and her mom first discovered she was going to have a girl, both women said the same thing out loud.

“We’re gonna have a little Princess Anna,” Ruiz-Longoria recalled. “My mom and I joked about that but then when my daughter started growing up I thought ‘I hope she really does want to participate in it and shows an interest in it.’”

For the Mission native, the Texas Citrus Fiesta was a big deal in her household. In 2002, Longoria-Ruiz was selected as Queen Citrianna for the 65th annual Texas Citrus Fiesta. Her younger sister, Jessica Ruiz Shields, would also be crowned queen three years later. 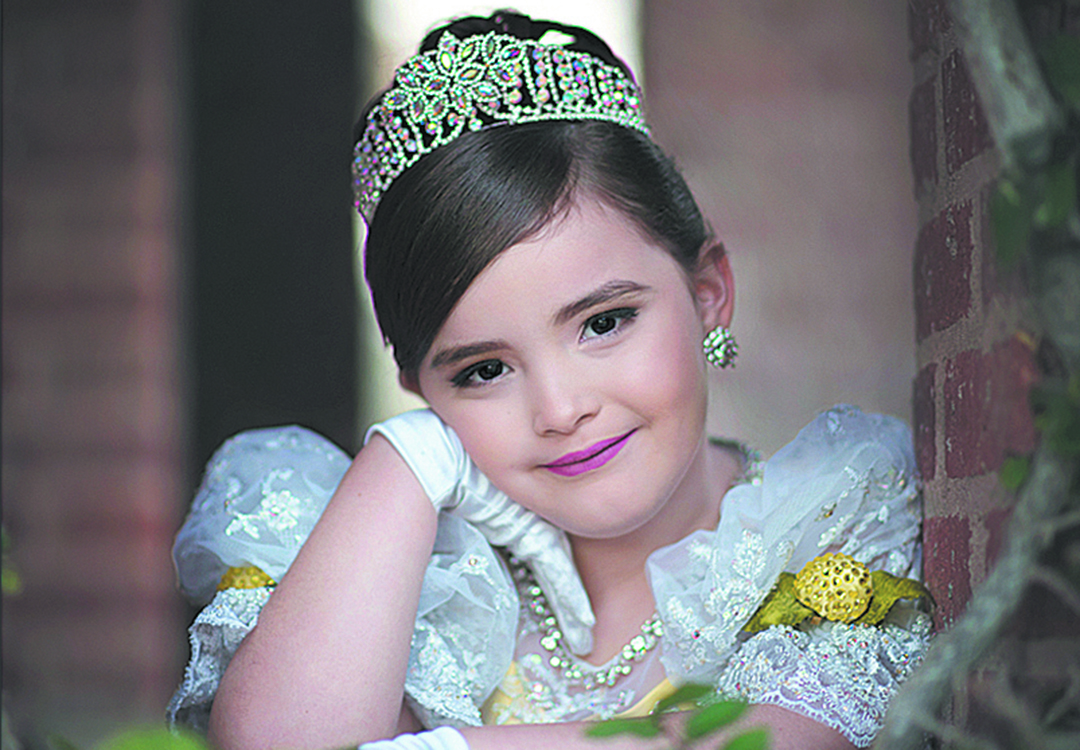 Both women had participated in TCF since they were children through being part of the Parade of Oranges, entering the shoebox float competitions and competing in the pageants.

And now, this past fall, Jennifer’s six-year-old-daughter, Camilla, is following in the footsteps of her mother and her aunt after being named Princess of Lemon Blossom at the Princess Anna Pageant last October.

“I feel very lucky that I am a real live princess just like my mom and aunt,” Camilla, a student at Agape Christian School said. “I want to be a queen like my mom was.”

For Ruiz-Longoria, her love for TCF started when she was part of a dancing group at the age of three and performing with her dance team at the Parade of Oranges.

“That’s the first memory I have of the fiesta, participating in it,” she explained. “It’s such an honor to participate in it because it was such a big event in the community. I was ecstatic to be on a float and wave to everyone and see people cheering. I didn’t understand it, but I knew I was part of something big.”

This led to an interest in learning more of the fiesta and its origins, Ruiz-Longoria said. As a Mission resident, her family never failed to visit the Parade of Oranges and eventually, Ruiz-Longoria started participating in the shoebox float competition and the pageants, which she recalled left her feeling “hooked” on the competition.

However, her proudest moment was when her little sister followed in her footsteps and also became Queen Citrianna, she said.

“I remember my sister was my biggest fan,” Shields said. “She would always give me advice and made sure I was comfortable in my role and that I knew everything I needed to know about TCF. I have so much pride in the fiesta and this was the only way I could show it.”

Since she was born, Ruiz-Longoria recalled that her daughter showed an interest in pageantry-related things such as walking in heels and wearing big dresses.

“I always thought ‘it’d be interesting if she displayed an interest in competing for Princess Anna,’ but I never pushed her to it,” Ruiz-Longoria said. “My husband and I agreed that we wouldn’t push her to this, she would have to come to a decision on her own if she wanted to do it.”

Eventually, Camilla made her choice during last year’s TCF after attending the royal reception.

“She just looked around the room in awe of what the duchesses and queen were wearing and wanted to take photos with all of them,” she said. “I knew at that moment the Princess Anna pageant was next.

To ensure she was committed to the pageant, Camilla’s mom and aunt sat down with her to discuss the history of TCF so Camilla could understand that TCF was more than just crowning a king and queen.

“I asked her ‘Do you understand the reason for doing it?’” Shields said. “I explained to her how as part of the TCF royalty, she would represent South Texas which is known for its citrus so we began telling her about the oranges, orchards everything. A lot of people don’t know the history behind the fiesta so it’s exciting to see a little girl who knows the crown highlights and also the background knowledge of the fiesta’s history.”

To be named Princess of Lemon Blossom, Camilla faced off against 15 other girls last October, one of who was one of her friends.

Camilla was one of the five girls who received a title at the pageant.

“I felt sad for my friend because she lost and I wanted her to win but its ok we’re still friends,” Camilla said.

Ruiz-Longoria, who called her daughter a hard worker, said the joy she felt at Camilla being crowned was not unsimilar to the one she felt toward her sister years ago.

“I was honored and proud of my sister then and my daughter now as they both won in their competitions,” she said. “I know how much they wanted it and there’s a sense of pride in knowing how much they want something and achieve it. That same feeling I had for my sister however, is stronger for my daughter. She pulls different heartstrings.”

To prepare Camilla for her role as princess, Ruiz-Longoria gifted her daughter with a pair of diamond stud earrings both she and her younger sister wore when they were both crowned Queen Citrianna.

“I was worried they’d be too big for her but she was ecstatic about wearing them, she calls them her good luck charm,” Ruiz-Longoria said.

Shields, who has a two year old girl named Scarlett, expressed enthusiasm at the idea of Scarlett also participating in the TCF pageants. According to Ruiz-Longoria, that may be happening soon for her other daughter, Camilla’s-two-year-old sister.

“Her little sister copies everything she says and does,” Ruiz-Longoria explained. “So at the Princess Anna pageant last fall, her little sister saw Camilla with a sash and crown and started crying ‘I want a crown and sash too’ so loudly that my husband had to take her outside to calm her down. It’s scary and nerve wracking but also exciting that she may want to do this pageant in four years.”