Two brothers from western Hidalgo County and a former La Joya school district clerk will not serve a single day in prison after pleading guilty to federal firearms charges. 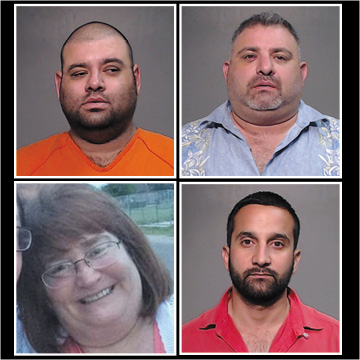 They confessed to buying guns for a relative: western Hidalgo County businessman Lombardo Bazan-Barrera. They pleaded guilty to making false statements on federal firearms forms. And they testified against Bazan at trial.

The jury, though, acquitted Bazan after a two-day trial in December.

“I don’t necessarily agree with the jury’s verdict,” Crane said during the sentencing hearing, adding that the acquittal required the court to consider equitable sentences for everyone else. “It’s definitely a conundrum, what to do here.”

After reviewing sealed motions from the U.S. Attorney’s Office and meeting privately with attorneys for the defendants, Crane handed down the sentences: Time served.

They didn’t actually serve any prison time. The sentence accounts for days they spent in federal custody waiting for a detention hearing.

“Mr. Bazan was acquitted. He was the ringleader,” Crane said. “So I have to make adjustments so everybody’s sentences proportionate and fair.”

Gonzalez said Bazan, her sister-in-law’s nephew, asked her to buy pistols for a shooting range. During the trial, Gonzalez testified that she trusted Bazan and didn’t know she’d broken the law until federal agents questioned her.

“If I would have known what he was going to do with the guns, I never would have purchased one,” Gonzalez said.

“It was just a family thing,” Rene De La Garza said, adding that he trusted Bazan. “A favor.”

Ricardo De La Garza, who is intellectually disabled, bought 21 guns for Bazan, according to court testimony.

“I believe Mr. Bazan preyed upon him as a gullible young man that Mr. Bazan could convince to purchase firearms for him,” said attorney O. Rene Flores, who represented Ricardo De La Garza.