It was a scene straight out of a movie Monday night as the Mission Veterans Memorial Lady Patriots cut down the nets after picking up a playoff win and being crowned bi-district champions.

“I’ve never actually cut down a net,” said junior post Jackie Howell after her team’s 53-27 first-round victory over Donna High. “You see it in the movies, in the big leagues, so to cut down this net with this team, it makes me feel proud we’ve got this far and we worked hard.” 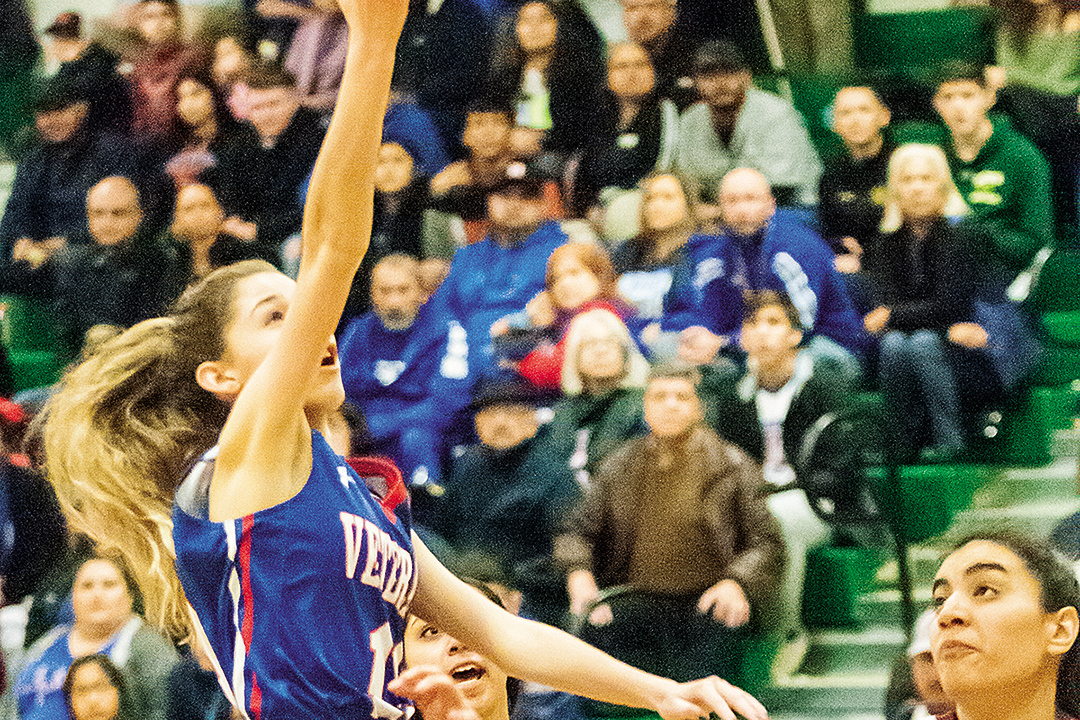 The Lady Patriots returned to the 5A state playoffs with a bang after missing out on the postseason last year. Head Coach Rafael Cantu Jr.’s group came out excited early, but eventually settled down and found their groove midway through the first quarter and never looked back after a 7-7 tie.

“We played together, which is what we need to do,” Cantu Jr. said. “We really played like a team tonight. When we’re moving, sharing the ball, looking for the best available shot, we’re a tough team because we have players that can play.”

It was a complete effort on the defensive end from the Lady Patriots who put an emphasis on shutting down Donna’s driving offense, making them feel uncomfortable and forced into difficult shots.

Sophomore point guard Ronnie Cantu, who is crafty with the ball in her hands and makes difficult passes seem easy, said the team was focused on playing lockdown defense in front of the big crowd.

“That’s what we needed to do tonight,” Cantu said. “We knew that Donna was a driving team, not so much shooting, so we need to go in and play lockdown defense and just play hard together. You’re in front of a big crowd, the competition is a thrill and I’m just excited to be here with my team and get this win.”

“Our team really came through and we all worked together and that’s what was most important,” Flores said. “ Now, we have to hit the gym first thing in the morning. We need to focus and come out strong, stronger than today.”

Awaiting the Lady Patriots in the area round of the playoffs is the Flour Bluff Lady Hornets, who a season ago, advanced to the 5A state tournament as one of the final four teams standing.

The Lady Hornets were crowned 30-5A champions of their 11-team district and picked up a big bi-district win of their own, knocking off Corpus Christi Winn High 55-20 Monday night.

Cantu Jr. knows the challenge Flour Bluff presents is a tough one but believes the Lady Patriots will come out with the same intensity they had Monday night.

“That’s the most important thing for us, is bringing that energy and that intensity,” he said. “The game can’t be played any other way. When we’re small like we are, we don’t have overall team size, you have to have more intensity than your opponent and your competitive drive has to be better. We’re going to play a really good team but I know the girls will step up and I know they’ll bring the same intensity and fight on Friday.”

The second-round playoff game between the Mission Veterans Memorial Lady Patriots and the Flour Bluff Lady Hornets is set for tonight at 7 inside the Texas A&M University-Kingsville gymnasium in Kingsville.