The city of Mission is coming to the defense of a cancer-stricken firefighter after their health insurance carrier, TML Intergovernmental Risk Pool, denied coverage for his cancer treatment.

Mission City Manager Martin Garza made this announcement during a press conference Friday, Feb. 16 where he told the crowd the Mission City Council authorized the hiring of outside legal counsel to assist in filing a lawsuit against TML in the hopes of ensuring Lt. Homer Salinas-who has served with the city fire department-receives assistance to pay for treatment for his kidney cancer. 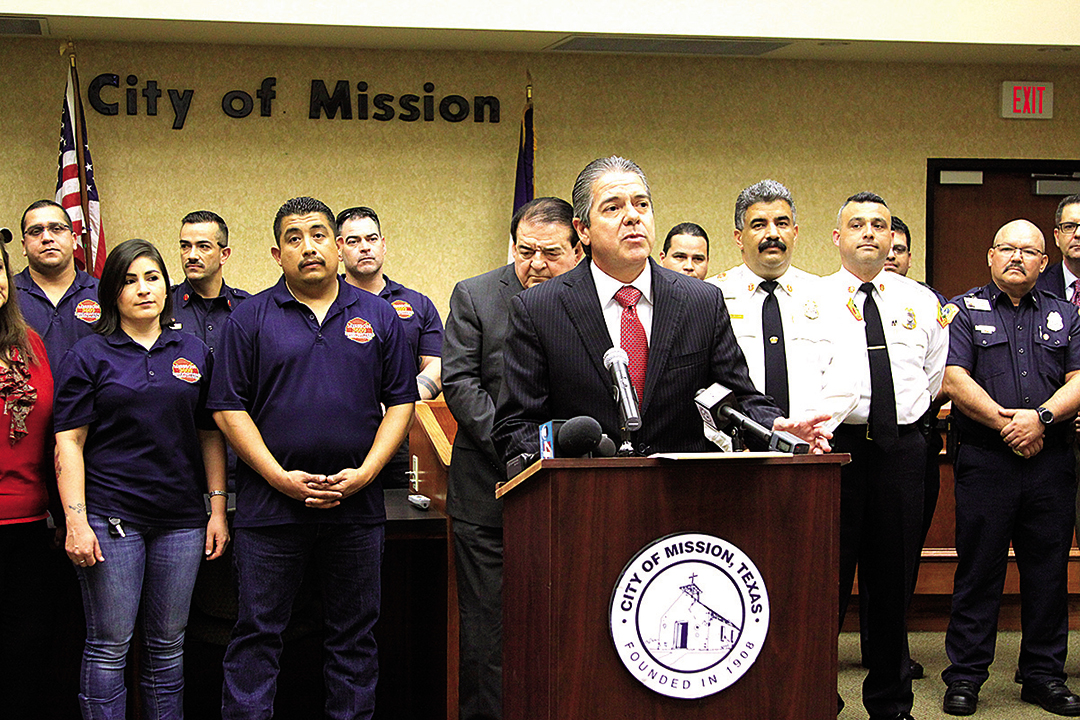 “This is very unconventional but extremely important for our council, elected officials and our firefighters,” Garza said.” It’s something we’re ready to move forward hopefully within the next week.”

Salinas was diagnosed with kidney cancer last December, according to a GofundMe page set up by his family. While Salinas was not available to comment, the GoFundMe page says Salinas is currently undergoing treatment at M.D. Anderson in Houston and the drive from Mission to Houston are causing a financial strain on the family, especially since Salinas is on a leave of absence.

The Gofundme account has raised more than $2,700. A request for comment from TML was unreturned as of press time.

Among those in attendance at the press conference were State Sen. Juan “Chuy” Hinojosa, D-McAllen, and State Rep. Sergio Munoz, D-Mission, who were among the state legislators who worked on a presumptive law which ensures treatment of job-related illnesses, Garza said.

Garza said he, along with City Attorney Jaime Tijerina and Mission Mayor Norbeto “Beto” Salinas, met with TML earlier this month at their Austin headquarters to discuss the coverage. It did not go as planned, Garza said.

“TML was basing their decision to deny coverage on a study on the likelihood of contracting the illness if a person is exposed to certain things” Garza explained. “That study has nothing to do with the intent of law. The law is clear that if a firefighter was exposed to hazardous materials through his employment, he’s entitled to benefits according to statutory law. We feel there’s a breach of contract, one of several reasons why this lawsuit is being filed.”

John Riddle, president of Texas State Association of Firefighters, was at the event. According to Riddle, most firefighters his organization has helped fight their denial of coverage have TML as the insurance carrier.

“The sad part is in most cases, our firefighters die before they get their claim covered,” Riddle said. “Depending on treatment, firefighters can incur medical bills of up to half a million dollars and Texas law is clear, Lt. Salinas has earned the right to have his cancer treatment covered by worker’s comp insurance or by the City of Mission. He should not be fighting this cancer and this claim at the same time.”

Riddle ultimately argued that the state law, under Chapter 607 of the Texas Government Code, was clear that Salinas’ treatment should be covered.

“Like firefighters throughout the state, Salinas has been exposed to toxic smoke, chemicals and other dangerous materials on the job,” Riddle said. “We know now, and science backs this up, that firefighters are at elevated risks to contract several kinds of cancer, among them, the kidney cancer Lt. Salinas is fighting. More than 30 international studies link firefighting to cancer. What the scientific company knows, the insurance company-particularly workers comp insurers-often do not.”

As the city prepares to file the lawsuit, Garza said they will look into what they can do to ensure an incident like this doesn’t happen again, such as working with the Texas Legislature to ensure the burden of proof falls on the insurance carrier.

At the press conference, he said the city may even drop TML-who they’ve had since 2000- as their insurance carrier.

“If TML is not going to have the best interest of our employees, then it’s very obvious we’re going to look at different carriers and what options we have,” he said. “There is no doubt the city of Mission supports not only this firefighter but the firefighters in the past and hopefully those in the future so they won’t have a situation like this.”

Salinas’ GoFundMe page can be found at https://www.gofundme.com/fightforHomarSalinas.