Hopefully the boost they need to grow even more, three local businesses have just received awards after presenting for the Mission Economic Development Corporation.

At the most recent Mission EDC board meeting held at the Center for Education and Economic Development on Feb. 20, the Ruby Red Ventures Awards were given to the top three business presentations. 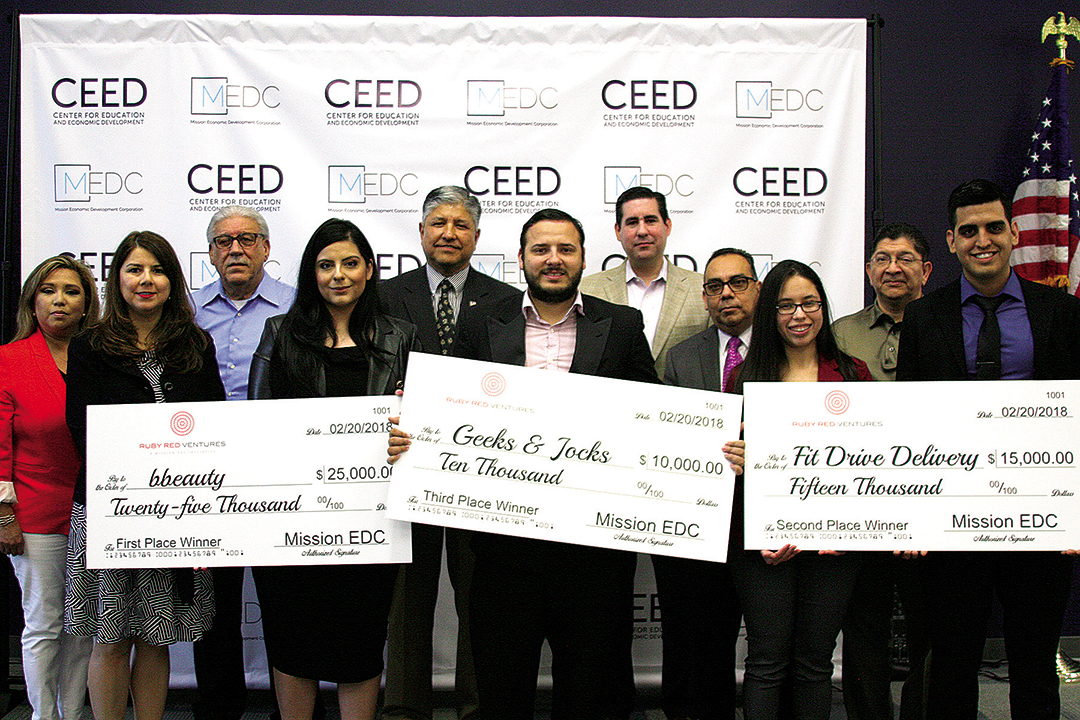 Seven companies presented at the CEED Building two weeks ago, and the top three were selected by the Mission EDC Team. $50,000 was distributed among the winners.

Cristina Garza, Mission EDC’s Program Director, presented the awards and spoke about each company there that day.

“We feel very comfortable with the strength of the proposals that were given,” Cristina Garza said. “It was a tough one. It was a little bit nerve-wracking to have so many people watch them, but everyone did an incredible job. The three here today did an astounding, and amazing job.”

Alex Meade, the Chief Executive Officer of Mission EDC, also commented on the quality of the presentations that were given.

“The competition is definitely getting stronger,” Meade said. “I would not want to be in their shoes.”

In first place was bbeauty, a beauty app that is headed and being developed by Pamela Garza. The company won $25,000, that will be put toward future business.

“She has been working on this for several years, she first joined the coding boot camp that we used to hold a few years ago with the expectations of being able to create   this app herself,” Cristina Garza said. “She later decided that she was going to hire other people to help her do it, but she is someone who has come into this idea from the inside out and has thought of every aspect of it.”

The bbeauty app will be a mix between Instagram and Google, but exclusively for makeup.

She also said that her motivation for making bbeauty had to do with her love for makeup and technology.

“I felt that I was passionate about the subject,” Pamela Garza said. “There’s not a lot of women in tech, so I want to be someone who can inspire others and be an example and come out of a community and show that you don’t need to go to Silicon Valley to create a big company. You can build it here, in the CEED Building.”

Taking second place was Fit Drive Delivery, a food delivery service that provides healthy lunches to businesses and schools that order them. The company is run by Emmanuel Garcia and his partner, Jessica Maldonado, and they won $15,000.

“He has a lot of delivery experience because he used to be our pizza delivery boy,” Cristina Garza said. “He found out about Ruby Red because he used to deliver the pizza for Ruby Red, and he asked about the building and what it was about, and it was because of that curiosity that he found out about the program, and he told me that he was a business student and has a business idea, and asked if he could apply, and ended up doing a fantastic job with this idea.”

Fit Drive Delivery hopes to next tackle childhood obesity in schools and provide more alternatives for people in Mission and the Rio Grande Valley.

“I get to finally fulfill a dream that I’ve had for so long,” Garcia said. “It started from the bottom, pretty much. I get to target a class of people that I feel I was once with, obesity for example. I saw that it is a problem and I finally can make a change.”

In third place was Geeks & Jocks, a store that brings collectibles and comics to Mission. The business was started by David Avila, and it won $10,000. Avila also won a Ruby Red Venture Award for Geeks & Jocks last year.

“Last time, he won $14,000,” Cristina Garza said. “And since then he’s been able to quadruple his profits. And I know this money is going to go to good use, since he has proven to be an incredibly driven small business owner and entrepreneur, and we’re so excited to have him here in downtown Mission.”

Avila said they plan on remodeling some of the store to make it more standardized, and also hopes to start making their own products in order to supply other stores like his and get their name out there. Geeks & Jocks has also created partnerships with two school districts and has expanded events for their anime clubs.

“It’s really exciting, because I can grow my business even more,” Avila said. “I was more nervous this time than the first time, because I was busier last time, I guess.”

After the awards, Mission EDC Board President S. David Deanda spoke to the business leaders who won the Ruby Red Ventures Awards.

“I just want to applaud all the winners for all their commitment, hard work, for ideas and for your vision,” Deanda said. “It’s small businesses that made this country great. People like you inspire people like us.”