The crowd at Juarez-Lincoln Husky soccer games has grown in size over the last few years. There you’ll see a lively student section chanting in unison, cheerleaders cheering their team on and families lining the fence waiting after games to congratulate the pride of Juarez-Lincoln with high-fives.

After making an appearance in last year’s 6A Soccer State Tournament, the Huskies have grown so popular even students from other schools make the trip to see Juarez-Lincoln take the field. 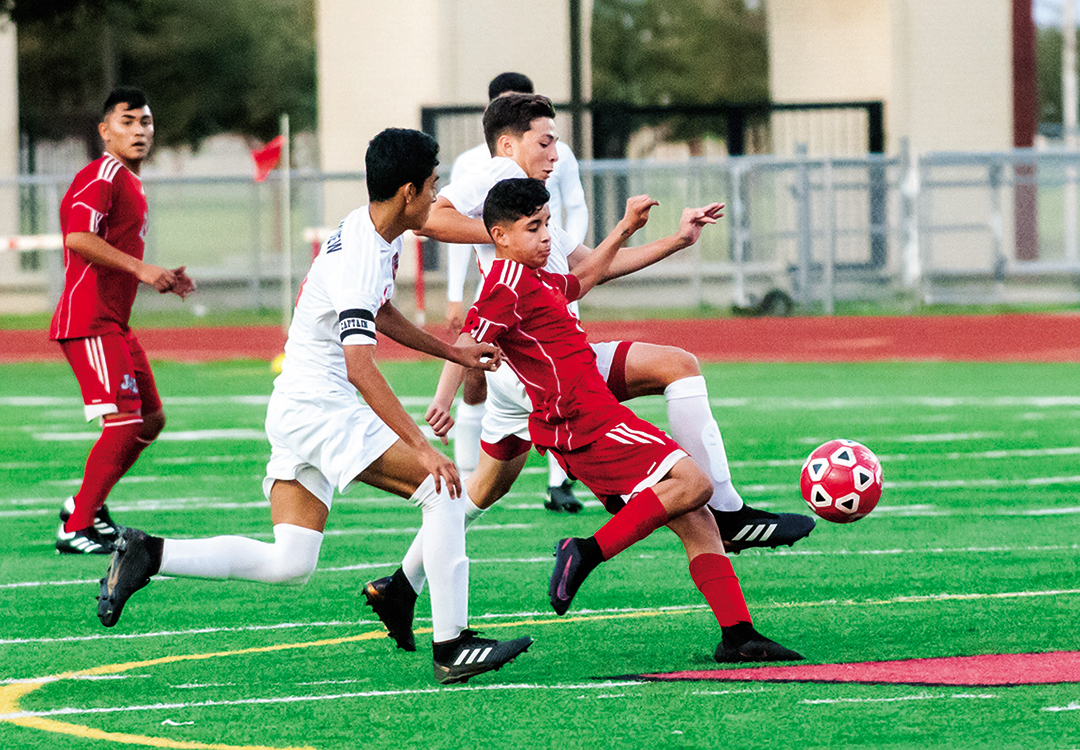 “The last players from Juarez-Lincoln left a great legacy and now everybody supports us because we went to the state tournament and it feels amazing having their support,” said senior Manuel Castrejon, last year’s District 30-6A Most Valuable Player. “I’m very happy we have this support. People from other schools come and see us and that’s what I’m really shocked at. It’s amazing that we’re the ones that everybody’s looking at.”

The Huskies proved why all eyes are rightfully on them as the 30-6A leaders continued to stroll through district play Tuesday night with a 6-0 win over the rival Palmview Lobos.

Juarez-Lincoln scored three goals in each half as Castrejon broke the scoring seal six minutes into the game with a lob into the box that travelled so well, it went over the Palmview goalkeepers head for the Huskies first points. 20 seconds later, the Huskies were at it again as Johan Arevalo scored from 20 yards out. Senior forward Gerardo Reyes got in on the scoring action to close the first half on a free kick from 32 yards away.

The Huskies kept the pressure on in the second half, playing most of the game on Palmview’s side of the field. Juan Castillo punched in a ball that was deflected by the Palmview goalkeeper, leaving an open net for him to find. Reyes scored his second goal of the game after beating three Lobo defenders and Javier Torres scored the Huskies final goal with a strike from nearly 30 yards out.

Juarez-Lincoln boys’ Head Coach Victor Ramos said his team was injured early in district play as they were down four key pieces, but are now healthy again and putting on a goal-scoring clinic.

“The kids are playing great; six goals, what can I say?,” said Ramos. “It was a great game for us and we needed this game to play better. We had four or five injuries in the first district games. Now, we’re healthy and you could tell, we’ve had a lot of goals in the last four or five games. The key is in this long season is to just be healthy.”

Reyes, who was named last year’s District 30-6A Offensive Player of the Year,  was one of the key players who missed time earlier this season with a calf injury. After his two-goal performance against Palmview, Reyes said he’s happy to be healthy again and building momentum as the Huskies ready for the playoffs.

“It feels great to be scoring goals for my team again, and most of all to stay healthy, I’m grateful for that,” he said. “It’s important so we can get that momentum when we start playoffs. We’re looking forward to meeting the teams that await us. Our goals for this year are to go to the state tournament again and to win it.”

The Juarez-Lincoln boys’ soccer team now sit comfortably atop District 30-6A at 7-1 and 21 points, six points ahead of second place Mission High. Next up for the Huskies is a meeting with the Eagles, the team who handed the banged-up Huskies their lone district loss by a score of 3-0 on Feb. 2.

“It was a tough loss, we weren’t expecting that,” Castrejon said. “We’ve been working very hard and it’s sweet that we have another game coming up. We’re ready to play that game and we’ve worked harder and we’re stronger, I believe.”

The Huskies and the Eagles will face-off Friday at 6 p.m. at La Joya Pack Stadium.

The Juarez-Lincoln Lady Huskies were just as dominant in their matchup with Palmview Tuesday night as they came through with a 7-1 win. Melanie Olivares found the back of the net four times, while Pricila Hernandez scored two goals and Ashley Segura scored one.

With the win, the Lady Huskies improve to 4-4 in district play with nine points, putting them in sole possession of fourth place after La Joya lost to Memorial 4-0 on Tuesday.

The Lady Huskies have four games remaining in the regular season and put themselves in position to claim the final of four playoff spots up for grabs in District 30-6A.

Over the next two weeks, the Lady Huskies will face three playoff contenders, including the first and second place teams in 30-6A. The action kicks off 8 p.m. Friday as Juarez-Lincoln hosts the Mission Lady Eagles (1-7, 3 points) at La Joya Pack Stadium, followed by matchups with McAllen High (7-0, 21 points) on March 6, La Joya (3-5, 9 points) on March 9, and McAllen Memorial (7-1, 21 points) on March 20.