Gathering from all over the Rio Grande Valley, people seemed to enjoy the conversation, connections and coffee.

Last Thursday, the Mission Economic Development Corporation held its first ever Civic Innovation Summit, hosting speakers, entrepreneurs, and creators from all over the United States. The all-day event is also the first of its kind in the Valley. 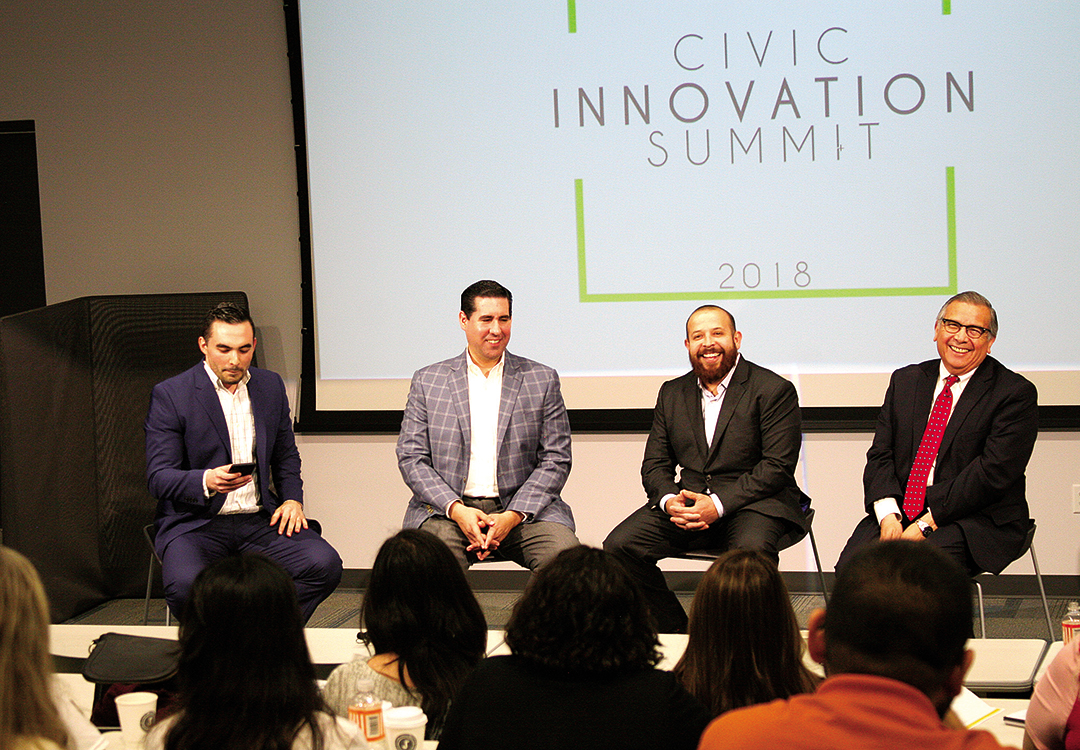 The summit was held at the Center for Education and Economic Development (CEED) building. Alex Meade, Mission EDC&rsquo;s President and Chief Executive Officer, kicked off the event with a brief introduction of what was to come.

“Innovation is typically something that people think happens in large communities and only large communities,&rdquo; Meade said. “But the fact is that it&rsquo;s happening everywhere throughout this country, large or small. And sometimes, the innovation is taking place more often in smaller communities because we&rsquo;re having to learn how to do more with less.&rdquo;

Meade said that doing more with less comes with improvising and coming up with alternative solutions for the problems that larger communities sometimes take for granted.

“The Valley has always been known as an area with low income, low education, so therefore the companies that we recruited, the things that we&rsquo;ve done in the Valley have always been things that we can do with our hands,&rdquo; Meade said. “We&rsquo;ve never been looked at as a community or as a region that can work with our minds. The Valley is growing, and now we&rsquo;re starting to see more innovation take place in communities like ours.&rdquo;

Meade used the CEED building as an example of how the RGV has been changing. The building, newly renovated, used to be a K-Mart, then a Converse facility, and then a ropa usada warehouse. Now, he says the EDC is there to nurture innovation and entrepreneurship.

“For us to be having these discussions, I think it allows us to prove that we are an innovative community,&rdquo; Meade said. “Despite the fact that we&rsquo;ve had all the odds against us, the region is very innovative.&rdquo;

Cristina Garza, the Mission EDC Program Director, organized the event with help from Cityflag, a company based in San Antonio that is part of the EDC&rsquo;s current Expert in Residence Program. The two pooled their resources and contacts in order to coordinate the summit.

Alberto Altamirano, the CEO and co-founder of Cityflag, spoke about the difficulty of getting people excited about civic innovation.

“Sometimes it&rsquo;s challenging to talk about civic engagement or civic innovation in Texas, because some people get it and some people don&rsquo;t,&rdquo; Altamirano said. “So the challenge is there, but you&rsquo;ve got to push those boundaries.&rdquo;

Garza said that the event took about three months to plan everything, and the result was due to all the hard work everyone involved put into it. The event sold out, with a few more people showing up than expected, allowing for a cool 100 to 150 total people in attendance.

Garza said the summit was meant to promote local innovation, foster a more resilient community and share networks with people from across the state and country.

“I think what matters to us is, how do we get creative with what our city provides?&rdquo; Garza said. “What is our community? How do we engage people? How do we promote entrepreneurship? How do we make tech and tech education more accessible? So these are all the things we are thinking about when we talk about building a better city. So that&rsquo;s where the idea of civic innovation came to be. We had to narrow down the speakers, and I thought we had very strong content.&rdquo;

The speakers at the summit ranged from entrepreneurs to start-ups to business owners, such as Digi.City, Geekdom, Cityflag, ULinks, the Latino Business Action Network and CompTIA. The talks included solo speakers as well as panel discussions, all of which allowed for public interaction and many questions and answers.

The summit also allowed for fifteen high school girls from the Mission area who are currently part of Garza&rsquo;s internship program with the EDC to participate and help run the event. Garza hopes they were able to gain even more from this experience.

CompTIA, the Texas Workforce Commission, Sequel Data Systems Inc., Jitterz and Whataburger partnered with the EDC to make this event a success. With more than 20 talks and panels covering various topics to choose from, and 30 speakers, there were several opportunities for people to share insight and information.

“There&rsquo;s clearly this energy that we just need to change the perspective of how we&rsquo;re seeing this region, and we need to see it with fresh eyes, and with the eyes of opportunity and the eyes of the potential that this land has,&rdquo; Garza said. “The content and the quality of the content that was here is the same or even better than what you would find at South by [South by Southwest]. And that says a lot about who we are here, that this is something that, that we are the kind of people that appreciate it, us in the Valley. We want this, we can have these types of conferences and that we can have these ideas as well. Because there&rsquo;s nothing stopping us from being the next Austin.&rdquo;