When investigators raided the Voodoo Lounge last year, what started as a standard gambling case took a strange twist.

On paper, Adan Christopher Palacios owned the Voodoo Lounge — a nondescript bar at the intersection of Farm-to-Market Road 495 and Veterans Boulevard in San Juan. He requested a permit from the city. He handled the Texas Alcoholic Beverage Commission paperwork. And when investigators raided the Voodoo Lounge in mid-November, they found him behind the bar.

Investigators seized more than $12,000 and two dozen slot-machine style devices from the Voodoo Lounge on Nov. 11, according to court records. They accused Palacios of paying cash prizes, which violated Texas law.

Palacios, though, told a different story.

“Mr. Palacios went on to say that it was a guy from Peñitas or Palmview by the name of Arnold Ochoa who assembled the business,” according to the civil forfeiture affidavit. “He also said that Arnold’s wife’s name is Claudia and that she is in politics.”

Former La Joya school board president Arnold Ochoa worked for the Palmview Police Department for 18 years. His wife, Claudia Ochoa, currently serves on the school board.

Arnold Ochoa said he knows Palacios and connected him with a business opportunity, but adamantly denied any involvement in illegal gambling.

“That he feels he was betrayed or whatever he feels, that’s up to him,” Arnold Ochoa said. “I just hooked him up with those people. And if he felt that, I’m sorry.”

Patrons would relax on couches while enjoying glasses of wine, Palacios said, according to paperwork reviewed by the San Juan City Commission. Attempting to assuage any concerns, Palacios promised the Voodoo Lounge “will not be a typical bar.”

He didn’t mention the slot-machine style devices, which became a major attraction for the Voodoo Lounge.

Questions about the Voodoo Lounge surfaced during October, when someone called San Juan Crime Stoppers with concerns about illegal gambling. Undercover cops visited the bar.

After the undercover cops handed Palacios cash, he provided them with PIN numbers to play the machines, according to the criminal complaint. When they won, Palacios paid cash.

Sweepstakes vs. Eight-Liners
How, exactly, the slot-machine style devices at the Voodoo Lounge worked remains unclear. 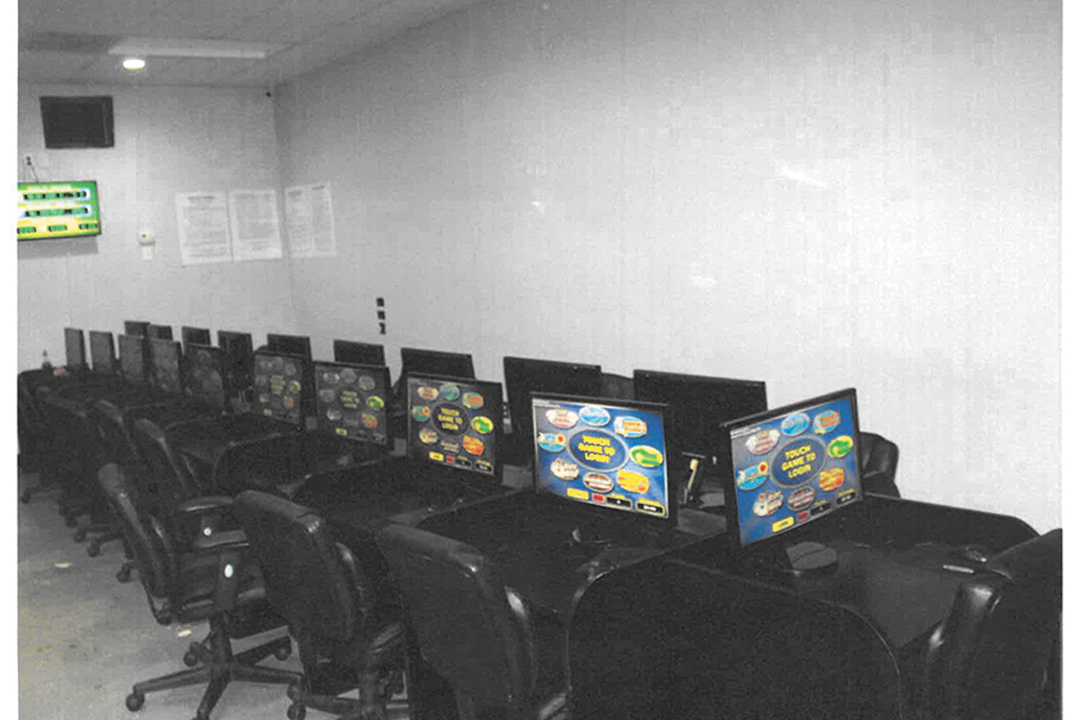 “It’s a subtlety that not many in the law enforcement community pay attention to,” Baggish said.

“There is also the risk of local law enforcement confusing sweepstakes machines as gambling devices and acting too hastily,” according to the Tejas Vending website.

“If somebody’s being paid cash upfront for their winnings, it’s automatically not sweepstakes,” Villarreal said.

They confiscated more than $12,000 from cash registers, the ATM and a small safe, according to the affidavit. Investigators also seized dozens of computers and four flat-screen TVs.

Palacios said he thought the slot-machine style devices were legal.

“He said that Arnold had lied to him because he was told that as long as they were giving away donations it made it legit to have an eight-liner business,” according to the affidavit.

Palacios claimed the Voodoo Lounge donated money to the American Legion in Pharr.

The Voodoo Lounge donated $200 to American Legion Post 101 in Pharr, according to a spokesman for the organization. Concerns about the propriety of the arrangement prompted the American Legion to stop accepting money after the first payment.

What happened to the vast majority of the money remains a subject of contention.

“Anybody can mention anybody to the cops,” Arnold Ochoa said, adding that he didn’t do anything illegal.

The Aftermath
Neither Arnold Ochoa nor Claudia Ochoa was charged with any crime. Court records don’t reveal whether or not investigators took the allegations about Arnold Ochoa seriously.

Neither Palacios nor his attorney responded to requests for comment.

“To the media … sorry but we will not be doing any interviews for anyone,” the Voodoo Lounge wrote on Facebook in November.

He’s scheduled for arraignment on April 11.