It is livestock show season once again here in the Rio Grande Valley and the 15th Annual South Texas Agricultural Roundup, more commonly known as the STAR Livestock Show, is now in the books. With hundreds of Hidalgo County youth having spent months, or even years, preparing their market steers, hogs, goats, lambs, rabbits, chickens and/or their breeding animals for this show, there were no losers among the exhibitors.

While it is true that some exhibitors’ animals were awarded ribbons and banners while others weren’t, participation in livestock shows such as this provides each and every young person involved a positive learning experience that builds character, leadership and life skills that will serve them well for many years to come. So while we will focus here on a few of the exhibitors whose entries were determined to be worthy of championships by the judges, congratulations go out to all the participants, their parents and their Ag teachers and/or 4-H sponsors for jobs well done. 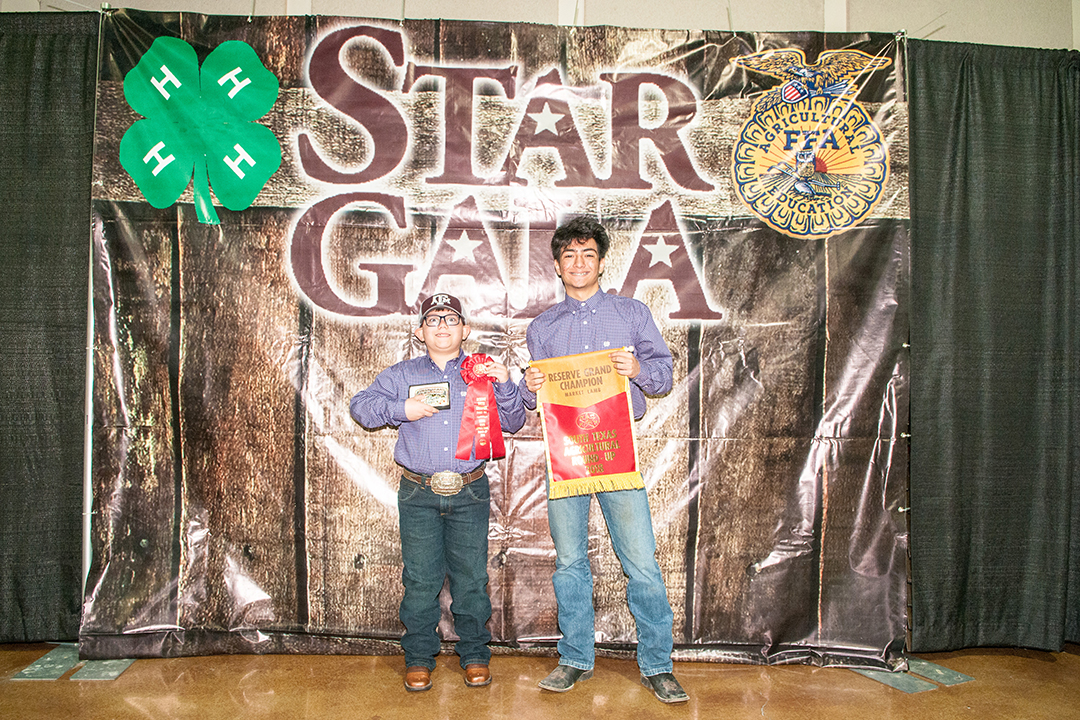 Prior to going through the STAR Premium Auction Saturday, Alaniz took a few minutes to talk about her light cross market hog that earned her the first grand championship of her eight year showing career. Including how she got her rather unusual name.

“My pig has a funny name,” Alaniz said. “She’s all blue with white hairs so she has a different look to her, so my Dad named her P.U. But not as in the stink but as in Pretty Ugly, so that is her name.”

Weighing in at 292 lbs., P.U. competed as a heavyweight. Before she could earn the right to compete in the grand champion drive however, P.U. had to win her breed championship.

Alaniz, whose father, Ruben Alaniz, is an Ag teacher at Veterans Memorial High School, sold P.U. at the premium auction for $5,200.

Having one champion entry in a show as competitive as the STAR Show is hard enough, but for one exhibitor to have a supreme champion heifer and a reserve grand champion steer in the same show is almost unheard of. That however is what Pioneer FFA’s Diana Garcia had.

The fact that Garcia had just shown her heifer at the San Antonio Livestock Show, where she did extremely well, gave her a pretty good idea of how good of a heifer she has.

“I showed her at San Antonio at the Simmental/Simbrah Super Bowl and I got reserve champion with her,” Garcia said. “I was really excited that day. My parents, my brothers and I have been working really hard with her. It was really good because it proved that hard work pays off.”

In only her second year of showing livestock, competing in the supreme drive was an experience Garcia will never forget.

“I’ve been working really hard for it so when it came to setting her up and presenting her to make her look her best, I got a little nervous,” Garcia said. “But when I won it felt amazing. At first I felt relief because I was really nervous, but then I felt like, “Yes, I finally got this!”

“It doesn’t usually happen,” Garcia said. “That’s what my Dad kept telling me, “I’ve gone to so many shows and I’ve never seen that happen.”

Garcia’s heifer received a $6,200 premium and her steer sold for $5.000 at the STAR Premium Auction Saturday.

Unlike Garcia who did not start showing livestock until she was in high school, a lot of exhibitors begin showing at a much younger age. This is the case with nine-year-old Veterans Memorial FFA member Jake Ruiz, whose dark cross market hog won reserve breed champion at the STAR Show.

Ruiz, a student at Midkiff Elementary School in Mission, took a few minutes after his 250 lb. medium weight hog went through the auction Saturday to talk about her.

“Her name is Firecracker because she always gets angry,” Ruiz said. “She won first place in her class and the reserve breed championship. It felt really good when she won.

Ruiz, who won a reserve grand champion showmanship buckle as well, went on to explain what it takes to be a good showman when he said, “Your pig has to be really clean. You have to make sure she’s not dirty. And you have to do a good job of showing your pig to the judge.”