Hoping to instill an appreciation for the city’s animals and promote growth in the area, two new dog parks will be built in Mission’s Bannworth Park and Bentsen Palm Community Park.

This Wednesday, the City of Mission held a ground breaking ceremony for their first dog park, located in Bannworth Park. 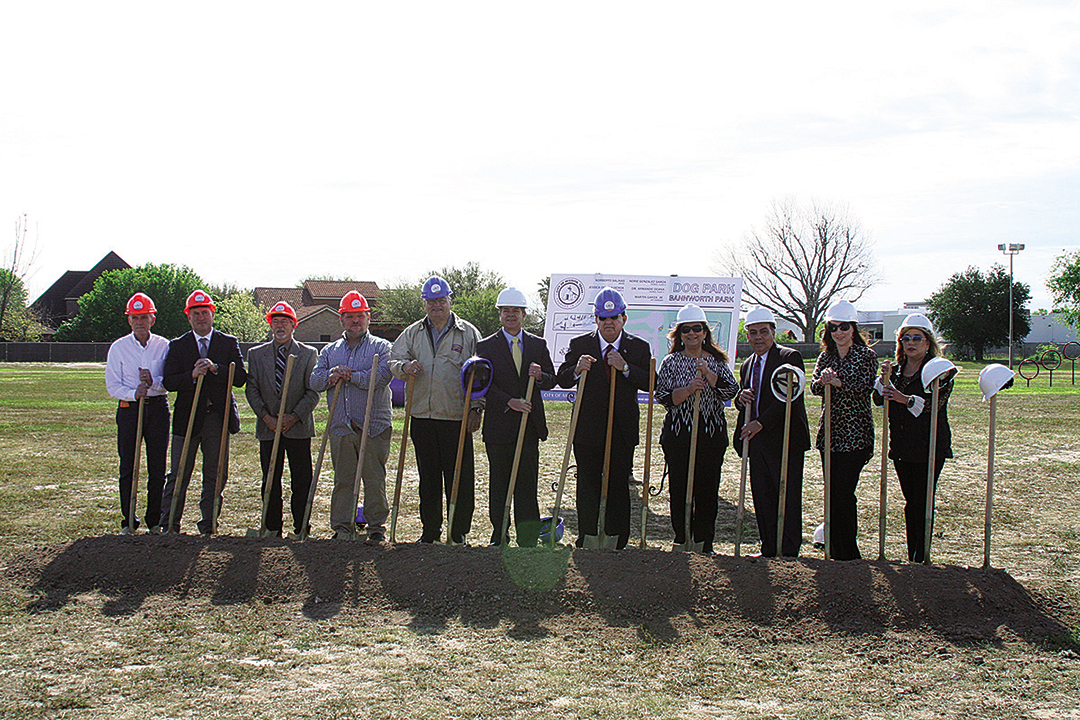 City Manager Martin Garza Jr. spoke at the event, and said that the city was incredibly excited for these new projects.

“There’s always a start, a beginning for a new project,” Martin Garza, Jr. said. “And before a ground breaking actually starts, you’d be surprised the amount of time and effort. People coming together in meetings actually make a project happen.”

Martin Garza. Jr. credited two people in particular, as well as the entire Mission Pawsible board, for being responsible for the motivation to build these dog parks: Cathy Garcia and Homer Garza.

Garcia, a pastor from Freedom Life Church, blessed the park at the beginning of the ceremony.

Homer Garza, a board member of the Mission Pawsible board, first came to the city’s attention because of his defense of Mission on social media. He was happy that the city responded positively to all the ideas Mission Pawsible has brought up in their new capacity. He hopes other cities may follow suit.

He credits Mission Pawsible for lowering the city’s euthanasia count, and that it is important to take care of the region’s furry friends.

“We’ve saved hundreds of dogs’ lives,” Homer Garza said. “It started out with a vision of an adoption center and then it sort of evolved a little bit into a rescue transport system. Before, we were putting down a hundred, up to 120 dogs per month, and now it’ll be four or five, and that’s just because of their health condition. Right now the number of lives we have saved in November and December in the few months, has been 428 dogs.”

Mission Pawsible is transporting dogs found up north to states like Arizona, Colorado, and New York through a network of rescuers.

Brad Bentson, the Parks and Recreation director for Mission, thanked everyone for attending the event and promoting new developments in the city.

“It takes vision and support, and a little bit of pushing,” Bentsen said. “None of this would be happening without the support of the community, our elected officials, and our Parks board.”

Bensten brought up some facts about dogs in the country, and how dog parks help dog owners.

“Over one-third of our nation’s population has not one dog, but probably two dogs in their households,” Bentsen said. “One of the things we can expect from the dog park here is healthier dogs, we can have healthier pet owners, and we can also have an improved quality of life in our towns and neighborhoods. Parks are a way for pets to frolic and socialize.”

He said that parks allow for pet owners to have a place to take their dogs and meet other experienced pet owners, and they are for the benefit of beloved pets.

The dog park became a project when Martin Garza, Jr., Bentson, and Garcia went to visit the dog park in McAllen and noticed that the people there were from all over the Rio Grande Valley.

The park was one of the top ten amenities the public in Mission was requesting from the city.

Mayor Norberto Salinas also spoke and said that this was necessary for the area, and is glad that they are expanding. He was very excited about the future dog parks in Mission.

“We have room for anything that we can have in Mission,” Salinas said. “People really wanted this park. I’m glad that we can be part of a city that provides this dog park for people. I hope we can open the other park soon.”

The dog park at Bannworth Park will be approximately two acres separated into five sections: a small dog area for furry friends that weigh less than 20 pounds, a large dog area for dogs that weigh more than 20 pounds, a central shaded area for leashed dogs, and two smaller areas within the small dog and large dog locations composed of decomposed granite to be used for training.

This park will include a variety of “dog amenities” to help train dogs constructed by the Parks “Strike Team,” as well as watering stations for dogs and dog-owners. It will be surrounded by butterfly gardens on all four sides. The gardens will be funded by a Monarch Butterfly Grant provided by the North American Butterfly Association.

The Public Works department will be adding two parking lots with 72 spaces in order to accommodate people who want to go to the dog park, as well as the needs of people using the natatorium, for instance, during swim meets.

The dog park to be located at Bentsen Palm Community Park will also be two acres, with small and large dog areas, training areas, and hopefully butterfly gardens as well.