Officers arrested a well-known smuggler last month after she abandoned four migrants at the Stripes convenience store in Sullivan City.

At 5:46 a.m. on Feb. 23, a policeman stopped a white Ford Fusion near the intersection of U.S. 83 and El Faro Road, according to Sullivan City Municipal Court records. 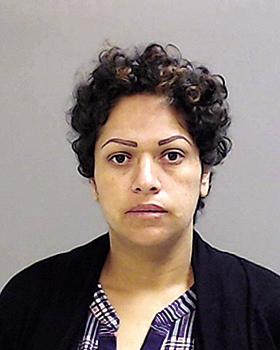 When the driver parked at the nearby Stripes, the policeman recognized her as Gloria Ortiz Albarran, 36, a Mexican citizen who lived in McAllen.

“Mrs. Ortiz was also recognized from previous incidents to be working in the human smuggling rings around Sullivan City,” according to the criminal complaint against her.

After she stopped the Ford Fusion, though, Ortiz walked away — leaving behind her four passengers. Border Patrol arrived moments later.

Agents detained the passengers, who weren’t legally present in the United States, according to the criminal complaint. Sullivan City police arrested Ortiz, a well-known smuggler with several prior arrests.

Officers detained Ortiz in November and handed her over to Border Patrol, according to the criminal complaint. Border Patrol apparently released Ortiz.

Court records don’t show any immigration or smuggling charges from the November incident. When asked what happened, the agency declined to comment.

“We do not provide information on administrative actions,” according to a statement released by Border Patrol.

She quickly returned to Sullivan City.

Roughly a month ago, police Chief Richard Ozuna warned her against loitering at Stripes.

Ortiz said she was waiting for a friend, but refused to identify the mystery friend or provide any details about their plans, Ozuna said, adding that he asked her to leave the area.

“They wait for the phone call,” Ozuna said. “And then they go pick up.”

Court records don’t list an attorney for Ortiz, who remains at the Hidalgo County jail and couldn’t be reached for comment.