Last weekend may have marked the beginning of Spring Break for many, but boys’ powerlifters across Texas were gearing up for their shot at qualifying for the state championships.

After a successful showing in the Region Five Division One Championships at Weslaco East High School last weekend, the Big 7 is sending 11 powerlifters to compete at the Texas High School Powerlifting Association State Championships Saturday, March 24 in Abilene. 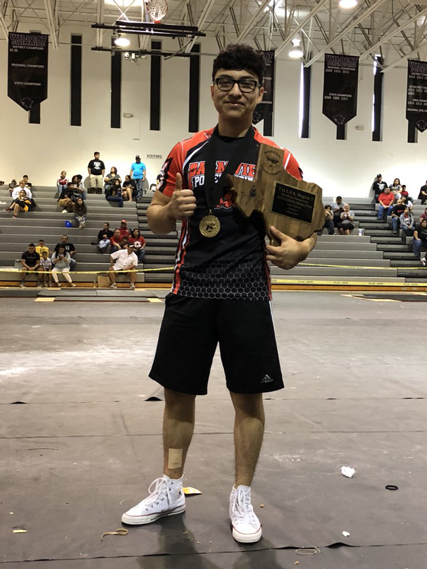 Of the 44 schools that competed at regionals, Sharyland Pioneer finished in fourth place as a team, while Palmview powerlifting finished tenth overall.

Leading the way for the Pioneer powerlifting team was the duo of Obed Hernandez and Robert Saenz. Hernandez brought home first place in the 198-pound weight class by lifting a total of 1,595 pounds, 10 pounds higher than the second place finisher in the weight class. Hernandez set personal records in squat with 650 lbs., bench with 365 lbs. and deadlift 600 lbs. Saenz finished second place in the 123-pound division with 1,200 total pounds, just five pounds behind first place Joel Sanchez of Brownsville Veterans Memorial. Saenz put up 445 lbs. on squat, 480 on deadlift, and a high in the weight class on bench press with 275 pounds.

Juarez-Lincoln led all Big 7 programs with three qualifiers for the state championships in Eddie Hernandez, Juan Martinez and Aliver Chapa. Chapa finished fourth place in the 275-pound weight class, lifting a whopping 1,640 total pounds, including a bench press of 430 lbs., the highest in the class. He also squatted 645 lbs. and deadlifted 560 lbs. Hernandez and Martinez both finished seventh in their respective weight classes of 220 pounds and 242 pounds. Hernandez lifted a total of 1,450 pounds, squatting 580 lbs., benching 350 lbs., and deadlifting 520 lbs. Martinez totaled 1,510 pounds, squatting 590 lbs., benching 345 lbs., and deadlifting 575 lbs.

Both Sharyland High and Mission High qualified one powerlifter each for the state championships to round out the group. For the Rattlers, Joshua Williams qualified by finishing eighth in the 275-pound weight class, lifting a total of 1,550 pounds, squatting 630 lbs., bench pressing 370 lbs. and deadlifting 550 lbs. Mission’s Javier Farias finished sixth in the 114-pound weight class with a total of 915 pounds, squatting 340 lbs., benching 165 lbs., and deadlifting 410 lbs.

The 11 boys powerlifters going to state gives the Big 7 a total of 28 total qualifiers after 11 ladies qualified for the girls’ state championships, which is going on this weekend in Waco.

The THSPA State Championships weigh-ins are scheduled for Friday with competition beginning Saturday at 8:45 a.m. The competition will be held at the Taylor County Expo Center in Abilene, Texas, located at 1700 Hwy. 36, 79602. Doors will open at 7:30 a.m.