After his eight year tenure as the head coach of the Mission Veterans Patriots baseball team, Casey Smith decided it was time for a change. That was why he applied for and was given the head baseball coaching position at Sharyland Pioneer High School in June of last year.

Citing the proximity of his home and of his three kids’ schools to Pioneer High School as the main reasons for the move, Smith seems to have fit right into his new job. And while it is still much too early to tell if he will be able to do at Pioneer what he did at Mission Veterans, turn a fairly young and struggling baseball program into a perennial winner, judging by the Diamondbacks’ success so far this season, it could very well be deja vu all over again for Smith, only this time at Pioneer High. 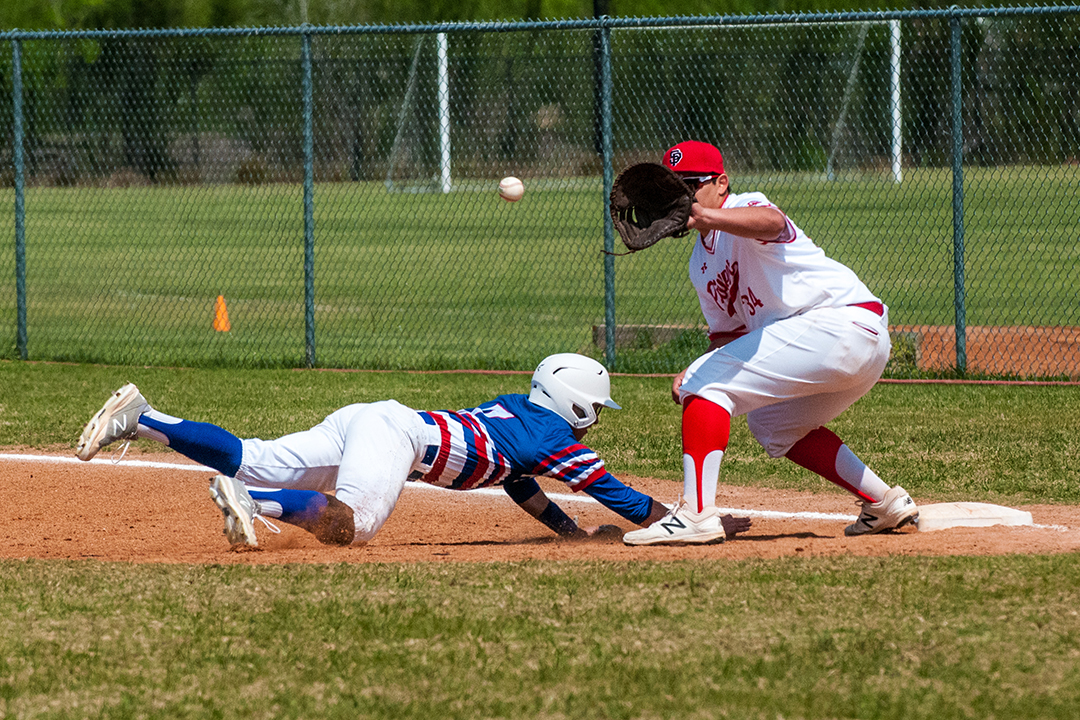 And what does Smith attribute his new team’s success to so far this season?

“We’ve just been growing,” Smith said. “That’s what we keep talking about as a group, as a team and individually; just growing and getting better. Our guys are starting to understand concepts that we’re teaching and just understanding that there’s a standard to be played to every time you step on the field.”

As for what it was like to coach against his former team, Smith said, “It’s always hard to play against your former kids because you care about them and you’ve gotten to know them for a long time. But like I told our kids, it’s a baseball game and it doesn’t matter who you’re playing, when you step between the lines you’ve got to play hard and do things the right way.”

Junior Jacob Rosales pitched a complete game for Pioneer to earn the win against the Patriots. He gave up five hits, two walks and chalked up one strike-out. Rosales also had two hits and scored one run as he helped his own cause at the plate en-route to improving his record to 2-1 with the win.

When asked what goals he and his teammates have for this season, Rosales said. “Improving every game and becoming a complete baseball team. Also, learning how to handle different situations, including dealing with adversity.”

As for what he attributes the Diamondbacks’ apparent turnaround to, Rosales said, “I believe it has to do with the energy on this team. Every practice is up-tempo. That has a lot to do with us getting better.”

While he did not play against the Patriots, senior pitcher and first baseman Robert Montoya is a returning member of the Diamondbacks’ varsity squad. His team’s early season success has him thinking of the possibility of a playoff-run for the first time in Pioneer High School history.

“We have to keep our heads up and keep on winning if we’re going to have a shot at the playoffs,” Montoya said. “We’ve been working on the fundamentals every day in practice and Coach Smith knows how to coach, so those will both work in our favor.”

As Smith’s successor at Mission Veterans, Ben Gonzales is finding the early going to be rougher for his Patriots than Smith is finding it at Pioneer. That is due in part to the fact that he only has two players on his roster with any varsity experience and only one of those has any experience hitting against varsity pitchers. Even so, Gonzales believes that the Patriots have as good a chance as any team in the district of making the playoffs.

“We’ve seen most every team in the district and as far as I’m concerned, it’s a toss-up in regards to which teams will make the playoffs,” Gonzales said. “If we show up to play like we’re capable of playing, I think we’re going to be right there in the hunt for one of those spots.”

Next up for the Patriots is a road game at Rio Grande City next Tuesday while the Diamondbacks’ next game is at 2 pm today (Friday) at home against the Sharyland Rattlers.