After four months since the former police chief was fired, the city of Alton has welcomed a new police chief.
Jonathan Flores, who has worked for the Hidalgo County Sheriff’s Office-as well as the police departments for the cities of McAllen, San Juan and McAllen ISD-was sworn in as Alton’s new police chief during Tuesday’s city council meeting.

“It is my goal to build upon the success Alton has experienced recently and to place our department at the forefront of professional policing,” Flores said at his swearing-in. “I believe this can be accomplished through technological advancements, an increase in training for our employees and strong partnerships with our community and law enforcement counterparts at the federal, state and local levels.” 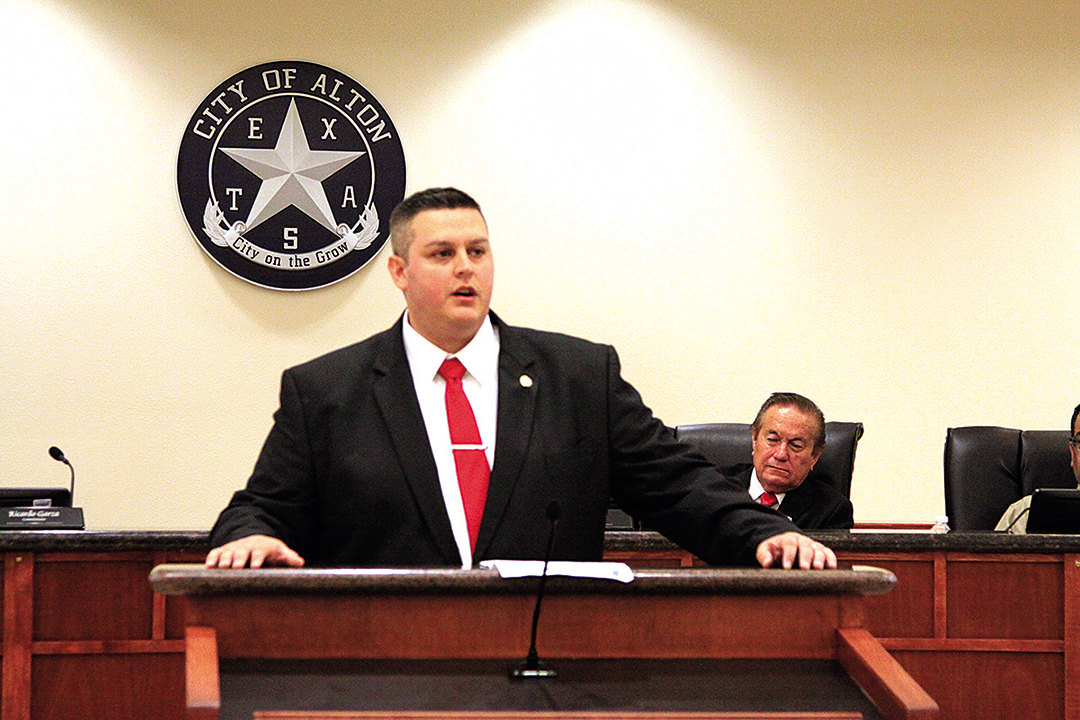 Flores&rsquo; hiring comes after former Alton Police Chief Enrique Sotelo was fired last November after an employee at the police department filed a sexual harassment complaint against him. An investigation into the complaint revealed that Sotelo was responsible for creating and allowing a hostile environment, Alton City Manager Jorge Arcuate said at the time.

Flores was one of 32 candidates who applied for the job, Arcuate said. He stuck out from other applicants due to new ideas he wanted to bring to the city, Arcuate said.
“He was the only applicant who came in with a five-year plan in hand on how he wants to develop and strengthen the department, him thinking that way says a lot about him,&rdquo; Arcuate said, adding that those ideas makes up for Flores&rsquo; lack of management experience.

“[Flores] is bringing in a modern look to the city and will find ways to make the department more effective and efficient,&rdquo; Arcuate continued. “I&rsquo;m sure he&rsquo;ll take advantage of many grant opportunities and create more ties in the community. Developing a relationship between the police department and the community will be his top priority.&rdquo;

Flores has a total of 12 years working in law enforcement, he said. At his swearing-in, he told the council he wants to promote the community, professionalism and integrity.

“These values are to serve as a compass to our employees to remind themselves that first and foremost, we are here to serve the community,&rdquo; he said. “In the performance of our duties, we must be cognizant that as public servants, we are held to a higher standard-and we must ensure we live up to those standards, day in and day out.&rdquo;

Flores said becoming a police chief has always been his career goal and he knew Alton was where he could do just that.

“Leaving the sheriff&rsquo;s office-while difficult-I knew this opportunity was for me&rdquo; he said. “There was solid leadership and stability here and when I first came to the police department, this place already felt like home.&rdquo;