For the 12th time since opening its doors 15 years ago, the Mission Veterans Memorial Lady Patriots track team has been crowned district champions.

The Lady Patriots hosted the District 31-5A track meet at VMHS April 4 through 7 and posted a first place finish with 225 team points, 43 more than the second place Sharyland Lady Rattlers. 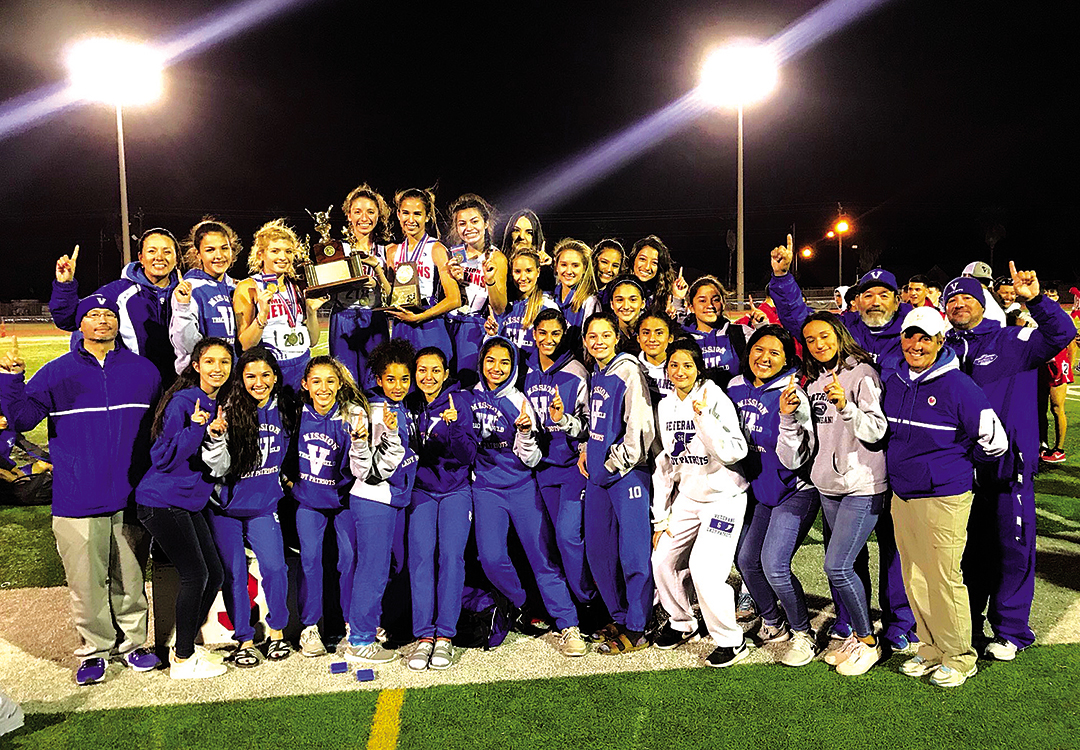 “It was a sweet surprise; we weren’t expecting some of the things we got out of them and they just stepped up and decided to put things together for our only senior,” Howell said. “We told them we don’t like sending seniors out without a district championship, so they had a responsibility to get that taken care of and they did.”

In addition to Vela’s senior leadership, a large part of the Lady Patriots’ success at the district meet came from their three relay teams, as the 4×100, 4×200 and 4×400 each earned a place on the medal stand.

De La Garza delivered an all-around solid performance as the junior qualified for the area meet in seven different events, including the high jump, long jump and triple jump. While the team district championship may have been a surprise to Howell, De La Garza’s performance at the district meet was anything but that.

“She’s been consistent all year for us, especially in the high jump,” Howell said. “She’s one of those kids that if you ask her to do something she says “yeah, coach I’ll do it.”

The Lady Patriots also had two throwers qualify for the area meet in junior Ashley Navarro in discus and sophomore Charlee Salinas in shot put. Navarro earned gold with a throw of 108 feet and 6 inches.

Howell credited the student-athletes she’s been fortunate enough to coach for the success at Mission Veterans.
“There’s kids here at this school that are willing to step up and do whatever’s necessary, and I’m blessed to be able to work with them.”

With the district meet in the rearview, the Mission Veterans Memorial Lady Patriots track team qualified 12 girls to compete in 13 events at the April 20 Area Meet, where district’s 31-5A and 32-5A will clash for a shot to advance to regionals.

“It’s just a little bit more intensity, a little more focus on what they’re doing because now there’s only 12 of them that need to pull it together in order to win an area championship,” Howell said.

The 31/32-5A Area Meet is scheduled for April 20 and will be hosted by Edcouch-Elsa High School, the district champion of 32-5A.