The softball season is winding down and the playoff picture is taking shape. The La Joya Lady Coyotes have already locked up the District 30-6A championship, while the Mission Veterans Memorial Lady Patriots and Pioneer Lady Diamondbacks are tied atop District 31-5A with just one game remaining.

With the playoffs approaching, these Big 7 teams are hoping to carry over the high-level of play from the regular season and turn it into a deep postseason run. 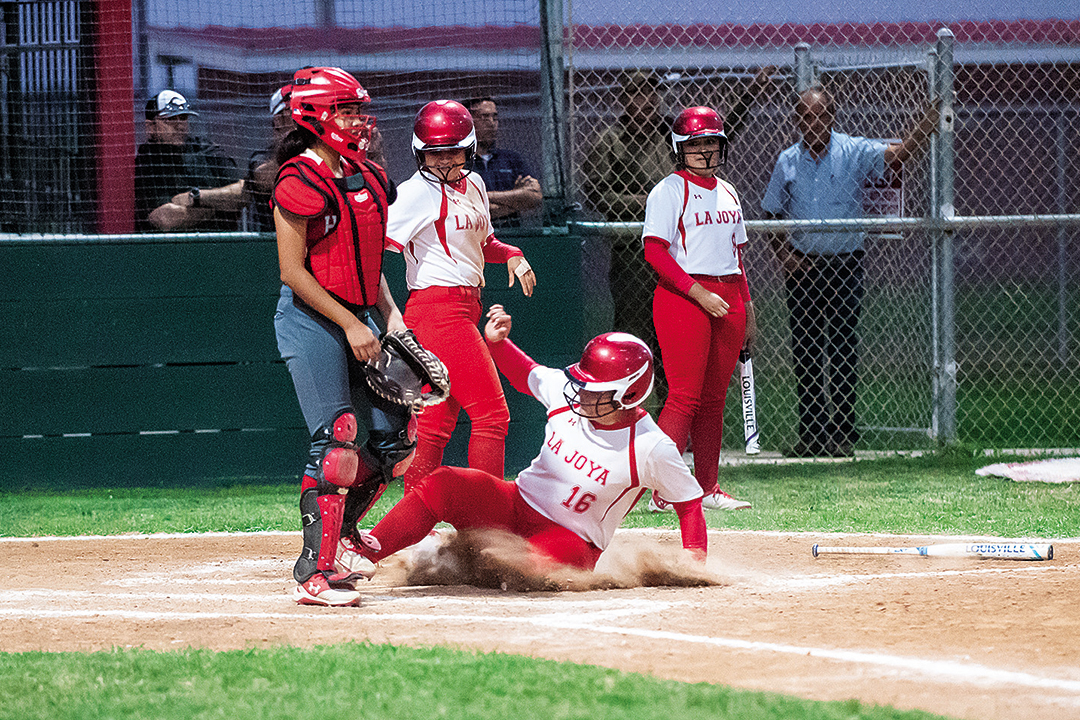 La Joya looking for perfect first place finish
The La Joya Lady Coyotes have been dominant all year in district 30-6A and their 11-0 record proves it. The Lady Coyotes picked up district win number 11 Tuesday night in a 3-0 shutout of Nikki Rowe, and can close out the season a perfect 12-0 with a win over Palmview on Friday night, set for 7 p.m. at Palmview High School.

The Lady Coyotes clinched the 30-6A championship in a 14-0 win over Juarez-Lincoln on April 13, as the second place Memorial Lady Mustangs sit three games behind La Joya in the district standings. Head Coach Charlie Rodriguez and his senior-laden squad have cruised through district for the most part, outscoring opponents 123 to 21 in 11 games, five of which were shutouts.

Led by a trio of seniors in pitcher Sabrina Salinas, shortstop Monica Garcia and third baseman Alexandria Alaniz, when La Joya gets rolling at the plate and on the mound, it’s hard to stop them. The Lady Coyotes have 10-run ruled three opponents and 15-run ruled two others, displaying the dominance the District 30-6A champion possesses on the diamond.

The Mission Veterans Memorial Lady Patriots and Pioneer Lady Diamondbacks are tied for the top spot in 31-5A as both boast impressive 12-3 records, and with just one district game remaining, the Big 7 will have either one or both teams crowned district champions after tonight.
For the first time in three seasons, the Pioneer Lady Diamondbacks dropped a district game as they currently sit at 12-3 in 31-5A play. The losses haven’t stopped Pioneer, the two-time defending district champion, from contending for another title in 2018.

Head Coach Orlando Garcia and his group have bounced back from defeat to find themselves in a tie for first place, in position for a third straight district championship. The Lady Diamondbacks destroyed Laredo Martin 26-0 on Tuesday night, and can clinch at least a share of the District 31-5A championship with a win against Roma tonight at 7 p.m. at Pioneer High School.

The Mission Veterans Memorial Patriots have been a pleasant surprise in 31-5A, but it’s no shock to them. The Lady Patriots, coached by Vivian Ray, needed a big win over Rio Grande City on April 13, as RGC, VMHS, and Pioneer all held 10-3 records entering the day. The Lady Patriots went on to overpower Rio Grande City with a 20-10 win in five innings.

The Lady Patriots continued their winning ways beating Sharyland 15-4 on Tuesday, sending the Lady Rattlers down the standings into sixth place while the Lady Patriots stood firm tied for the district lead with Pioneer, even though the Lady Patriots swept the series against Pioneer with wins of 7-5 on March 2 and 13-12 on April 3.