When it comes to high school basketball, freshmen rarely get the opportunity to “play with the big boys” (or “girls”). Even the best freshmen players are usually delegated to the junior varsity (JV) where they get more court time than they would on varsity.

From time to time however, a freshman comes along that is just too good to stick on the JV team. This type of player is ready to contribute and compete at the varsity level right away so there is no need to put him or her on the JV squad. 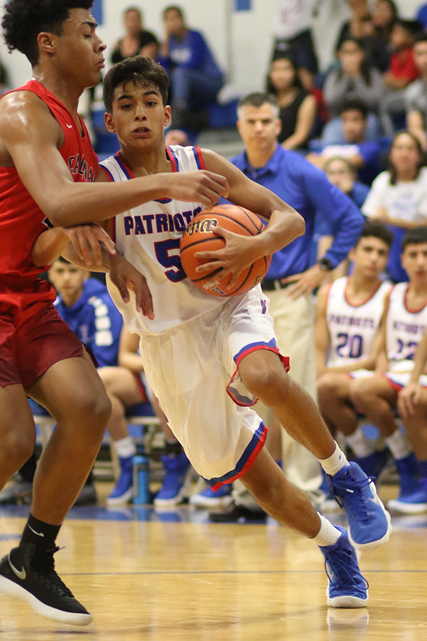 As the son of Patriots head basketball coach Romeo de la Garza, Jr., Elijah de la Garza was practically born dribbling a basketball. He’s been playing competitively since he was four years old so the fact that in his freshman year he was fourth in the district in scoring and first on the Patriots in assists should come as a surprise to no one. The fact that he was recently named First Team All-Area however is somewhat surprising. Not because he didn’t earn it, but because he was up against sophomores, juniors and seniors from all across the area and still received one of the five highly coveted First Team spots.

Besides being named First Team All-Area, de la Garza was named District 31-5A and RGV Basketball Coaches’ Association’s Newcomer of the Year and was named to the District 31-5A All-Academic and the RGV Vipers All-Valley Showcase West teams. He was also named to the All-Tournament teams at the Mission Thanksgiving Classic and the San Perlita Classic basketball tournaments.

When asked what receiving this kind of recognition and all these accolades means to him, de la Garza said, “It feels great because I’ve put in a lot of work all the time and the fact that it’s paying off now feels good.”

And why is he so good?

“I feel as if I’m good at basketball because I love the game. I don’t play any other sports and I don’t have very many hobbies because I just love basketball.”

De la Garza is not letting the fact that he still has three more years to go as a Patriot stop him from thinking even further ahead into his basketball future.

“My dream has always been to play at the professional level,” de la Garza said. “Right now that’s what I’m working for. But if that doesn’t work out I’ll probably go into coaching.”

The Lady Diamondbacks’ freshman phenom that was named All-Area Newcomer of the Year and District 31-5A’s Co-Newcomer of the Year is Audry Hornaday. She and de la Garza have a lot more in common than being stand-out freshmen basketball players. That’s because they grew up playing basketball together. They also attended Coach de la Garza’s summer basketball camps together and they now play on the same traveling team.

“I feel so honored and blessed to be named as Newcomer of the Year,” Hornaday said. “It’s such an honor that I’m speechless. I’m so privileged to work with some great coaches and great teammates. They’ve all helped me to become the player that I am and to receive this honor.”

Like de la Garza, Hornaday has been playing basketball since she was four years old. And like de la Garza, it’s her love for the sport that has kept her coming back for more.

“I love everything about the sport,” the 5-foot-8 point guard and shooting guard said. “But what I love the most is knowing that I have so much more room to improve. People have always told me that I’m a great player but I’m never really satisfied with that. I know that I have so much more ahead of me and I know that I’m only going to get better. That’s what really excites me the most.”

While Hornaday is thrilled to receive post-season recognition, she would’ve gladly traded each and every honor she received in if she could have given the Lady Diamondbacks a playoff berth.

“We as a whole team really wanted to make the playoffs,” Hornaday said. “As for me personally, I really wanted to help the seniors on the team get their first taste of the playoffs. Sadly we didn’t do it but I’m hoping that we will be able to do it this next season for the first time in school history.”

“What really matters to me is the team,” Hornaday added. “All this individual stuff is great but none of it would’ve happened had it not been for my teammates and my coaches. I know that the seniors would’ve loved to have made the playoffs in their last year on the team and that is why making the playoffs would’ve meant more than anything.”