Hoping to secure the position of Mayor of the City of Mission, Norberto “Beto” Salinas laid out his 2018 platform and what he intends to do if re-elected.

Salinas held a Meet and Greet event last Thurs., April 12 at the Mission Event Center. During the campaign function, supporters of the mayor gathered to listen to his intentions for Mission. 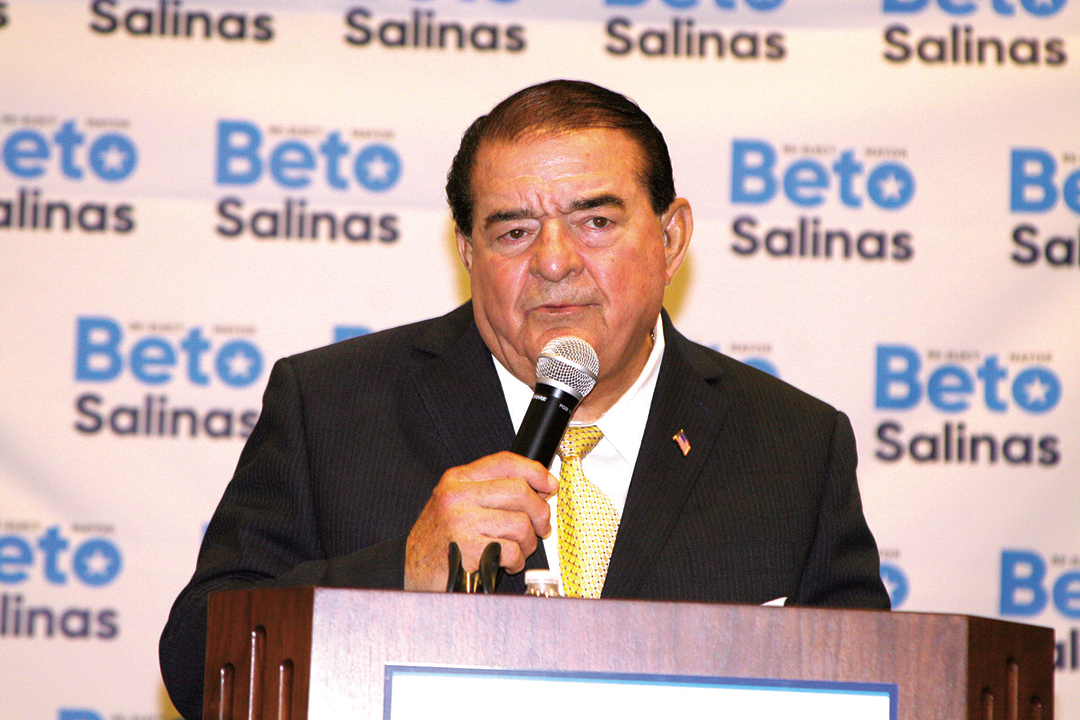 Mayor Salinas greeted people and posed for pictures as they entered the Ruby Red Room. Julian J. Gonzalez, Henry Rodriguez, Minnie Rodgers and Petra Ramirez were also in attendance, giving their support to Salinas and also their own campaigns.

Carina Garza-De Luna gave the introductory speech for the evening, and served as the Master of Ceremonies. She spoke in detail about the accomplishments Salinas made during his political career, and urged residents of Mission to vote for him.

“Because of the leadership of Mayor Beto Salinas, we have enjoyed long-term prosperity in the City of Mission,&rdquo; Garza-De Luna said. “Our city is beautiful, our city is clean, our city is safe, and we enjoy an excellent quality of life.&rdquo;

When Salinas took the podium, he spoke about his experience as a civil servant and his tenure as Mayor of Mission, the position he has held for 20 years. He went into further detail regarding his successful projects as mayor.

Salinas spoke about his work on the Anzalduas Bridge and the current Madero Bridge project, and the importance of continuing the work on these passages. He also brought up the Mission Event Center, and his initial hesitance in approving its construction.

One of Salinas&rsquo; main talking points was the tax rate, and how during his time as mayor, the city was able to lower taxes from 62 cents to 48 cents. He explained that his reasoning for lowering taxes has to do with the school system.

“The less we drop our tax rate with the city, the more the school district can use it for the kids,&rdquo; Salinas said. “I want the schools to know that that&rsquo;s why we lowered the taxes, because they can raise their taxes up a little bit.&rdquo;

Mayor Salinas said during the event that his goal will be to lower taxes even more if re-elected.

“I guarantee you one thing,&rdquo; Salinas said. “If I stay in office, that tax rate is going to be 39 cents in four years.&rdquo;

The other candidates running for mayor, Dr. Armando O&rsquo;ca&ntilde;a and Jaime Gutierrez, were also mentioned several times throughout the course of the evening, but never by name.

“Mayor&rsquo;s opponents are running on the platform of change,&rdquo; Garza-De Luna said. “Change just for the sake of change isn&rsquo;t good for our city, and is not what our city needs.&rdquo;

Salinas himself spoke about them during his speech. He said they “mean well,&rdquo; but according to him could not carry out the duties of the mayor as well as he can.

Without saying O&rsquo;ca&ntilde;a&rsquo;s name specifically, the mayor alluded to his opponent&rsquo;s time as a civil servant in the city.

After Salinas said this, an unidentified person in attendance shouted from the audience, “Where does he live?&rdquo; in reference to the recent claims made by Tomas Tijerina about O&rsquo;ca&ntilde;a&rsquo;s residency.

“I&rsquo;m not going to tell you where he lives,&rdquo; Salinas said from the podium. The crowd laughed and applauded as the mayor continued his speech.

According to Salinas, in October the police department in Mission will be getting a raise from $45,000 as a starting salary, to a $50,000 starting salary. He also said they hope to hire nine more firemen for the city.

“They&rsquo;re not getting it because I&rsquo;m running for office,&rdquo; Salinas said. “They always get a raise. When I came into office [in 1998], they were making $17,000. Let me tell you one thing, they deserve it.&rdquo;

The mayor also revealed that the City of Mission has been looking into the development and building of a new Boys and Girls Club.

“Let me tell you what we&rsquo;re going to do if we win,&rdquo; Salinas said. “We&rsquo;re going to build a brand new Boys and Girls Club building that is going to cost us $5 million. We are ready to spend that much money on the kids.&rdquo;

Throughout the speech, Salinas also highlighted his work on the roads in the City of Mission, and the five new city employees hired that will be dedicated to working on street improvements.

Marcelino De La Fuente, a lifelong resident of Mission, spoke during the function after the mayor. He said he has never publicly supported candidates in the past, but felt the importance of this particular election, as well as the Mission Consolidated Independent School District elections.

“Mayor Salinas has done much for the city that I have seen in the time he has served as mayor,&rdquo; De La Fuente said. “Some of us have forgotten to be grateful about things that the city provides. Let&rsquo;s be grateful that the leadership provided in the past can continue in the future.&rdquo;

Early voting begins this Mon., April 23 and runs until May 1. Election day is Sat., May 5.