Martha Flores Rangel’s world was forever changed five years ago when she was notified her daughter had been murdered.

“It seems like yesterday, like I’m still dreaming that it didn’t happen,” she said. “I don’t wish this on nobody.” 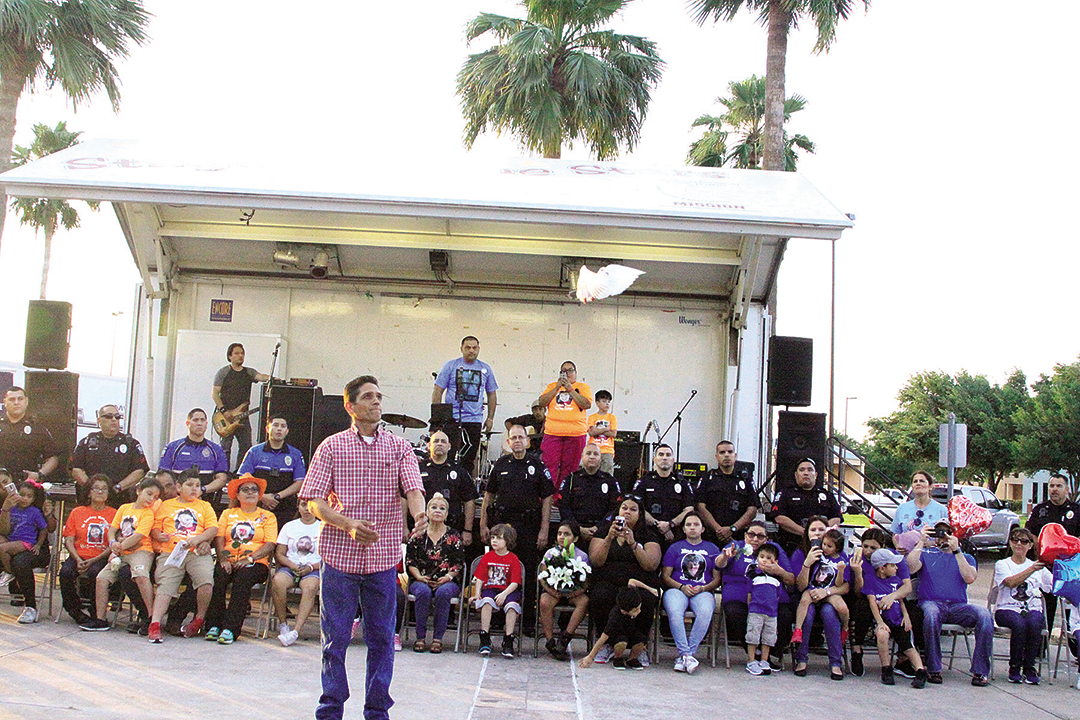 Rangel’s daughter – Jolissa – was gunned down at her Edinburg apartment after arriving home from work October 25, 2013, she said. Jolissa was murdered five days before her 21st birthday and left behind a two-year-old son. Her murder remains unsolved.

“The community tells me and other family members of murder victims ‘It’s OK, your child is in a better place, let her rest in peace. Move on,’” Rangel said. “My daughter existed, why can’t I cry for my child?”

Rangel recounted the details of her daughter’s murder at the city of Mission’s 11th annual Walk for Victim Rights April 12. Held at the Mission Police Department, the event was in observance of the nationwide event National Crime Victims’ Rights Week, an initiative that promotes victims’ rights and honors crime victims and those who advocate on their behalf.

The event was co-hosted by the local non-profit Rio Grande Valley Family & Friends of Murdered Children, which Rangel volunteers at.

“We don’t just speak for murder victims, we speak for victims of other crimes and their survivors,” Rangel said. “We’re here to support more families in the future. Because crime is not going to stop and we work to ensure our loved ones won’t be forgotten.”

Several families showed up to the event in honor of a loved one as part of the event, which consisted of live music and a walk around the block to raise awareness for victims’ rights. The event concluded with a vigil where a single dove was released – which represented a sense of peace for the families in attendance, according to Robert Garcia.

Garcia is the founder of Rio Grande Valley Family & Friends of Murdered Children, which was started by Harlingen resident Robert Garcia after his brother – Rogelio “Roger” Garcia – was killed in a murder-suicide by his wife in 2011. He founded the organization after he and his family experienced a lack of understanding in navigating the criminal justice system and in the kinds of rights he and his family had.

“When my brother was murdered, I had to clean up the crime scene at his place but had no idea my family and I could’ve requested the local police department to do that for us,” he said. “Cleaning that crime scene was the most traumatic thing I’ve ever experienced and the smell of him and his blood was one that didn’t leave me for months. If I went through something like this as a result of a violent crime, how many other families are going through something similar?”

According to Garcia, his organization has helped more than 1,100 families across the Valley and have 200 cold cases from the past 30 years on their database.

“Some families get justice, some unfortunately don’t,” he said.

The organization offers weekly support groups, local advocacy, crisis intervention and accompaniment to court for victims and their family members, Garcia said. Events like the Walk for Victims’ rights walk are important for the community because, much like his RGV-FFMC, it promotes a sense of unity to crime victims to let them know they are not alone in surviving or being part of a violent crime.

“For many of us, we lost a loved one who is dear to us so this event is our way of being respected in a dignified way,” Garcia said. “We are in a survivor’s club we didn’t want to be part of, but it binds us together.”

For Dina Macias, the crime victims advocate for the city police department, among the reasons why the event is special for the community is because it acknowledges those who have lost a loved one and must pick up the pieces.

“Everyone here has lost a loved one but have come to be part of this gathering that honors those victims and their families going through turmoil,” Macias said. “This won’t make up for what they lost, but it can still give them a bit of comfort which is the least we can do.”

“It’s always unfortunate whenever someone loses a loved one, but we have to stay connected to those victims to remain committed to their families so we can bring justice for them,” he said. “This event is a step in that direction.”